Over the last few months we’ve made several tweaks to Zoho Projects, especially in the BugTracker module, to enhance your experience. Here is an overview of these improvements. 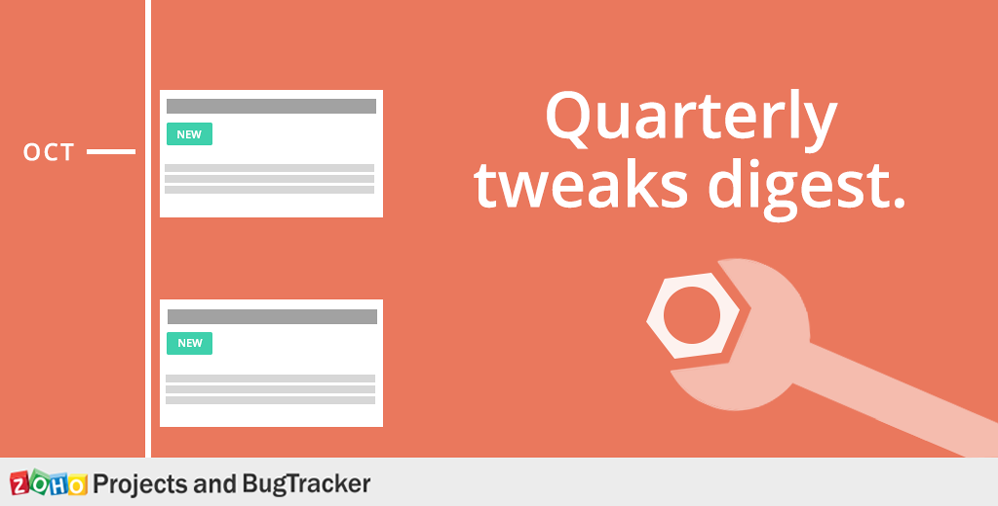 The screen-grabber lets you take quick snapshots of what you see on screen and make posts using these. A built-in draw tool lets you highlight what is important and blackout what you don’t want to be seen. The screen-grabber first appeared in the smart add screen located on top of the project feed. This was well received, so we started adding it to more places in Projects we felt were appropriate. Screens can now be grabbed while creating tasks, submitting bugs, making forum posts, posting comments, and attaching files. Can you find more?

We’ve also added a crop feature to the draw tool.

Our SLA supports four levels of escalations. We’ve made them easier to distinguish by introducing color codes for each that are listed as a column with the other bug detail fields. They let you quickly identify which level each bug is in. The color coded buttons on the left margin also let you view bugs based on their escalation level. We have also added these levels in the filters on the top of the page.

All the fields associated with a bug such as assignee, severity, and due date are shown in the same order wherever they appear: in the add bug form, in the list view, in the bug detail view, in the filters and so on. But this order is not etched in stone. It is floating in the cloud after all, so you should be allowed to change it should you feel the need to. We’re giving you the power to rearrange them with the new field reordering view.

We have a bunch of improvements to mention here. Firstly, tasks get a new rich text field for description. Secondly, they can be set to recur indefinitely. For example, you could assign a team member the task of creating a weekly report every Friday. You can now see such indefinitely recurring tasks in the calendar, resource utilization charts, and Gantt charts. Next, the project name and color codes depicting the task priorities are also shown in the Gantt chart. Lastly, while printing the Gantt charts or exporting them to a pdf, you can hide the task owner names and dates. The secret ingredient to your project success need not escape to the outside word!

And that’s not all folks!

Our designers have reorganized some buttons and added shortcuts to make things clearer and simpler. And our engineers have done geeky stuff to make the UI faster. A detailed list of our updates is available at our ‘What’s new’ page. We encourage you to explore all modules and let us know your feedback.