5 Ways to Showcase Your Value Proposition

If “above the fold” isn’t a term you know, you’re probably at least familiar with the concept. In the days before the internet, “above the fold” described the content located on the top half of a newspaper’s front page. This was the only of the paper that was visible from newspaper stands. If you wanted to see anything below the fold or on another page, you had to pay for it. To sell newspapers, the above-the-fold content had to be compelling and enticing.

While we use the term less literally now, the “above the fold” space is still vital real estate. On a site, that’s the part that visitors see immediately, without having to scroll. Users may not have to pay to continue to read, but what they see will either catch their attention as they metaphorically walk past your newspaper stand…or it won’t.

Obviously, you want the former to be the case. That’s why we think a lot about value propositions, which are your website’s “headlines.”

Your value proposition includes the features or qualities of your product or service that make people choose your company over competitors. It’s what makes your offering exceptional. So, the first thing you want to do in that “above the fold” space is differentiate yourself from the other products your prospects are considering.

Your headlines have a big job to do

Your headline and sub-headline need to answer these questions:

In other words: What do you have to offer, and why do your prospects need it? A good headline immediately lets your visitors know that they’re in the right place (or that they aren’t a good fit for your product). A good value proposition knows its target market.

Below are some examples of great value propositions from Dropbox, Thumbtack, Ironpaper, Mint, and Bresca, so you can see what we mean.

Speak to your customer 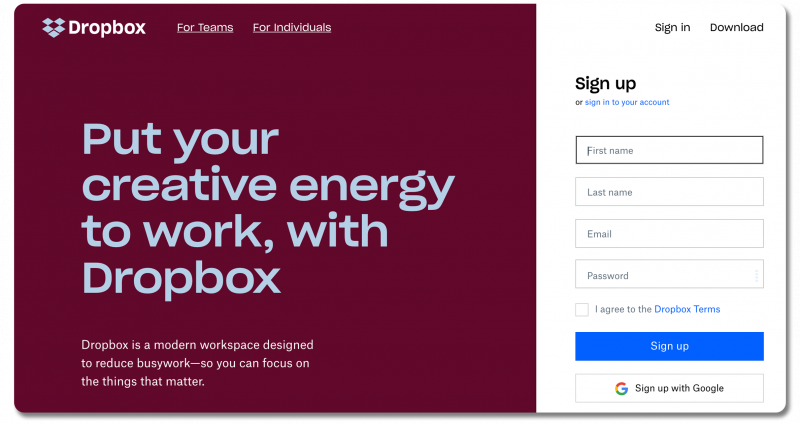 Dropbox’s headline speaks directly to the visitor (referred to as “you copy”). It invites them to focus on the “creative” aspects of their work that they may not have time to attend to right now. The sub-headline describes what Dropbox is, and suggests that it can help prospects refocus their attention—from “busywork” to “creation.”

Thumbtack’s headline uses a common turn of phrase that suggests speed and momentum. It also invokes the completed project in the prospect’s imagination… and imagination is a crucial step toward conversion.

The sub-headline then clarifies the headline by describing what Thumbtack does, using the same “you copy.” Phrases like “the right pros” and “every project on your list” invoke two things at once:

Sign up for our newsletter to get more business tips straight to your inbox:

Ironpaper does something interesting here by crossing out the overused industry term and “rewriting” their own industry. It’s a move that suggests unconventionality and innovation. Their sub-headline then clarifies what they mean by “growth.” It also smartly states exactly who their ideal prospects are (“B2B technology companies”), so site visitors can self-select or opt out right away.

This is also a great example of benefits-focused copywriting. Here, “digital marketing” is a feature, which is what many people instinctively use when describing their products or services. It’s a common mistake, but whenever possible, copywriting should be focused on benefits instead of features. In this case, Ironpaper’s clients don’t want “digital marketing”—they want growth, lead generation, and sales. And the copy is that much stronger for it.

Show them the future

Mint, a product that deals with a potentially-stressful topic, uses their copy to show customers what their future can hold… if they use Mint’s product. The headline gives the reader space to envision the relationship they’d like to have with their money. Words and phrases like “effortlessly” and “in one place” strengthen the simple and clear sub-headline. The simplicity and lack of jargon reinforce the idea that money doesn’t have to be stressful or confusing.

Get clever (but not too clever)

In this example, Bresca’s headline plays on the word “season” as both food-flavoring and a division of the year. The latter implies the restaurant’s commitment to the natural cycle (serving what’s “in season”). Wordplay can be hit or miss in copywriting—you should never sacrifice clarity for cleverness—but in our opinion, this instance works.

The sub-headline, however, gets a little muddier. Words like “forged,” “mingled,” and “flourish” are clearly meant to convey a high-end feel, but having them together in one sentence feels a little overpowering. “Mingled with flourish” doesn’t communicate a specific, concrete vision or sensory experience, so it’s not as impactful.

Whenever you’re using wordplay or less-common words in your copy, use a light hand. Remember: the goal is to show the customer exactly how your product/service will improve their life.

Note that—with the exception of Dropbox—each of these headlines and sub-headlines is in the hero image. What’s more, each sub-headline is directly followed by a call to action. Both of these items—hero image and CTA—should be the second and third elements you consider for that space above the fold.

For now, make sure you can summarize your business’s value proposition, as simply and clearly as possible. Sit with the examples above, and spend a few more minutes understanding what makes them great. Or dive into the websites of some of your favorite businesses, and see how they’re using that real estate. Come up with as many headlines and sub-headlines as you can. Then, you can mix and match them, and get input from other people (ideally current or would-be customers) to make the most of this valuable real estate.