Most of us see Gantt Charts within computers today. Hence, it is easy to assume that they are another offshoot of the digital era. If that’s what you thought, you are in for a surprise: for here is the incredible story of the Gantt Chart that spans across an entire century!

Rewind to the United States of 1918. The First World War has just ended. Colonel John T. Thompson, the inventor of the Thompson submachine gun, receives the Distinguished Service Medal, “for exceptionally meritorious and conspicuous service with the design and production of small arms and the ammunition thereby supplied to the U.S. army.” Thompson promptly sends a copy of this to a certain ‘Henry Laurence Gantt,’ with the following note, “A large share in this reward for the accomplishment of a great war task is due to H. L. Gantt and his assistants. The Gantt general control production chart was my compass.” Henry Gantt, mechanical engineer and management consultant, had already finished developing the Gantt Chart a few years before!

Moving ahead, we reach the period when America comes under the clasp of the Great Depression. The Colorado makes its way into Arizona from Nevada through an arid, desolate stretch called the Black Canyon. And at this location, to control floods and generate power, the Congress authorizes the construction of the world’s biggest and heaviest dam. Apart from the sheer scale of the endeavor, torrid desert environment, the need to use unproven techniques and the lack of facilities at the venue, present additional hurdles. Still, Six Companies Inc, a consortium of construction companies takes up this challenge and turns in the ‘Hoover Dam’ to the government two years ahead of schedule! It stands today as a monument of courage of the 21,000 men who built it and attracts about a million visitors every year. And once again, Gantt Charts are given credit for playing a key role in the management of such a massive project.

As time progresses, the charts continue to get used in one successful project after another. The areas of application are various ranging from construction to finance and shipping to administration. Personal computers emerge in the 1980s and Gantt Charts become more complex and elaborate than ever before. With the internet gaining popularity, they begin to get employed in web based applications.

In the August of 2006, we launched Zoho Projects, our web based project management app. Taking into account the significance of the Gantt Chart, we shipped the very first version featuring one. We bear in mind that it is indeed a great journey that has brought the Gantt general control production chart of the first world war to the Gantt view that comes to you from the Zoho cloud today. And this inspires us to take the story further in interesting, new ways.

On that note, we are happy to announce that we’ve rolled out a set of new enhancements to our Gantt Chart. The Gantt view now has two charts; the one you have been viewing shows task bars sequentially and we’re calling it the ‘Chronology Chart.’ We have added a new ‘Milestone Chart’ to give you the bigger picture. You can now view your milestones, the task lists they contain, and the tasks in these; all in one place.

You could set the period for which you viewed the chart to the current month, the previous month, the whole year or a custom period of your choice. We’ve added a new option here called ‘project span’ that  automatically displays the chart for the duration of the project.

Please view the below video for a detailed walk through of the new features. Our Getting Started Guide also has an article on Gantt Charts. 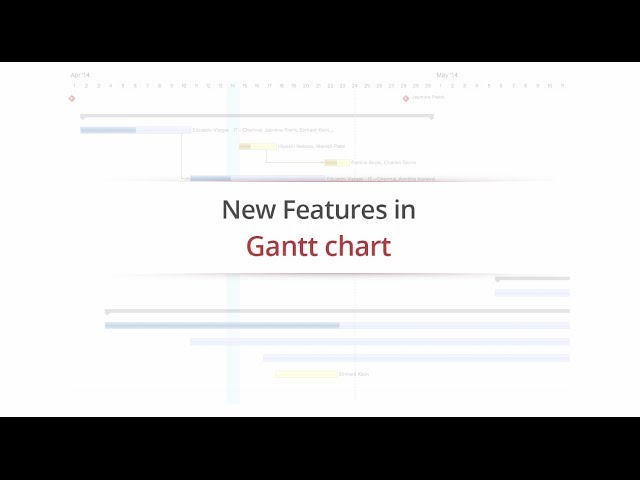 UPDATE: These enhancements were well received and we have launched a newer set of updates. The Incredible Story of the Gantt Chart continues here.

16 Replies to The Incredible Story of the Gantt Chart