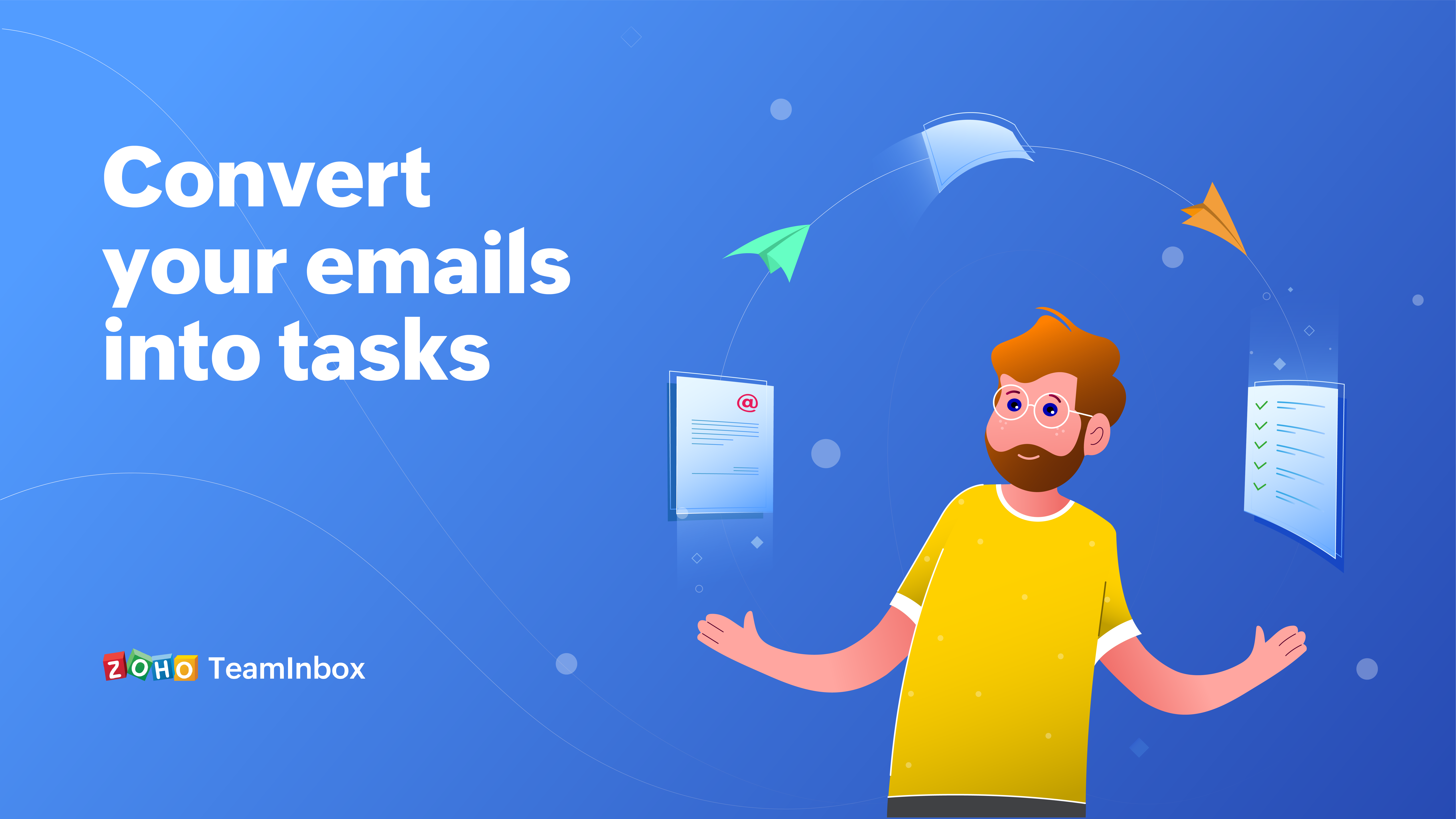 Since its inception, email has been a must-have mode of communication in workplaces. Teams across nearly every industry need email to stay in touch with clients and colleagues, and in our modern, hyperconnected world, our reliance on email isn’t going anywhere anytime soon.

Despite email’s convenience and ease of use, it’s not exactly perfect when it comes to collaboration. Sending group emails, getting them back, and then repeating the process makes for collaboration that’s often less than seamless. Have you ever gotten an email sent to a group address and forgotten to “Reply All”? We have, too, and we know how frustrating it can be—that’s why we developed Zoho TeamInbox to make it much easier to prioritize collaboration and increase team transparency.

This article will discuss how Zoho TeamInbox improves email accessibility for teams that share collaborative spaces. We’ll quickly cover how you can use emails to manage tasks and how to use emails as a to-do list. By the end of the article, you’ll know how to keep track of everything you’re working on in one convenient place.

Converting your emails to tasks with Zoho TeamInbox

One of the most common ways we get new task assignments is through email. In fact, we often get multiple assignments through our inbox multiple times a day and from multiple people. It goes without saying that keeping track of new emails and constantly forwarding emails to lots of different inboxes can quickly become chaotic.

Thanks to Zoho TeamInbox, though, you can easily create and manage tasks from an email and then link those tasks to previous emails. Zoho TeamInbox also lets you assign the tasks you generate from emails to specific team members after you post them in groups.

This method of collaboration tends to be a lot more efficient than the typical scenario in which many teams find themselves. Usually, a team lead gets an email from their supervisor and then sends out the new task to the rest of their team via a group email. From there, task management becomes increasingly complicated as each team member emails their own questions, comments, and progress on their task. This scenario, sooner or later, leads to lots of wasted time and a partial or total loss of context regarding the original task.

Zoho TeamInbox makes it simpler to avoid constant forwarding by letting you move back and forth between people’s inboxes. This can be particularly handy if you’re juggling emails between team members and non-task-related emails you send to customers. If you have clients from multiple countries, you need to take extra care as you wouldn’t want to mistakenly forward an email in English to a customer who speaks a different language. Multilingual marketing can help establish a relationship and build trust with leads, but you need a solution to separate task emails from other messages (and languages), or you’ll quickly run into a lot of confusion.

You can further maximize your level of convenience by assigning a thread to someone, archiving it after you’ve finished replying, and snoozing lower-priority threads to keep your inbox as clear as possible. Zoho TeamInbox also allows you to assign specific tags to make it easier to categorize thread-based discussions.

These are the features you can already use in Zoho TeamInbox, but we’re also working on launching even more features that will help you better organize your tasks.

Avoid lost context and wasted time by creating threads for tasks to maintain topic-based conversations. Zoho TeamInbox allows you to begin new topic threads with your colleagues with the “Discussions” feature. Conversations internal to your team are exclusively based on incoming emails, meaning you can keep all of your topic-based discussions in one collaborative space.

You can also easily juggle messages that are specific to another team you’re working with by sharing them from your personal inbox to theirs. Zoho TeamInbox allows you to move your emails using the “Move to inbox” functionality across different team inboxes. When another team assumes control of a task-related thread, simply make some space in your inbox. In the meantime, you can also split and merge task-related threads and keep track of them across different inboxes.

Part of properly managing different inboxes is sending your messages at the right time, which is why Zoho TeamInbox lets you draft emails and schedule them for later so you can focus on other tasks. Zoho TeamInbox provides the “Send later” functionality to let you write up a message at a time that’s best for you and then schedule it to be sent at a time that’s also convenient for your recipients.

At its core, email isn’t exactly tailored to be a perfect collaborative tool. To its credit, email has made lots of big strides in recent years, such as increasing efficiency thanks to group addresses that make it easier to send group emails. But as you probably know, smooth collaboration requires more than just receiving and sending group messages. It’s often the case that you need to take your internal discussions away from the inbox, at which point you risk losing the conversation’s original context.

That’s why we recommend treating emails as tasks with Zoho TeamInbox. You can still send and receive group messages while maintaining your internal discussions. Zoho TeamInbox gathers your different and often unrelated business discussions under a single roof for maximum collaboration and minimal switching between applications. You can finally take a break from constantly forwarding messages by seamlessly transitioning between different inboxes and sharing specific messages with the appropriate people.

You don’t need to worry about taking your conversations away from email: start maximizing your email’s collaborative potential with a tool we’re proud to share with the business world!

1 Replies to Convert your emails into tasks - Zoho TeamInbox