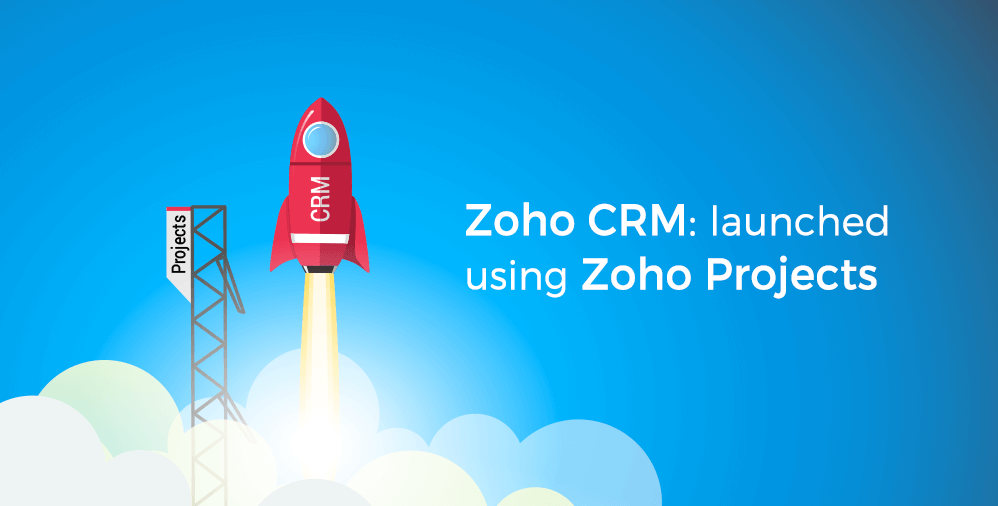 Zoho CRM 2016, that we released earlier this year, is our biggest launch yet; and that is both going by the number of features we shipped and the scale of the launch event.  A new UI, an inbox reinvented for the sales person, a marketplace to connect with third party apps are just a few of about a dozen new capabilities announced. On the day of the launch we held coordinated press events in the US, Mexico, UK, India, and Japan. The website with more than four hundred reworked pages was shipped.

If we pulled it off, it was thanks to something backstage that helped keep things together; Zoho Projects. “Our team spent more time in Zoho Projects than in Zoho CRM itself,” says Dilip who leads product management. Here are five things that worked for us through this launch that we feel are worth sharing.

There was a time when we would track a whole new product or launch under one single project. But somewhere along we realized it is better to break things down. Keeping the projects smaller not only made it easier to manage, but we found the engagement of team members also went up. Everyone in the group knew each other and so shared and discussed ideas freely.

Following this approach, each feature which was part of the Zoho CRM 2016 launch, went into a separate project. The product managers, developers, designers, marketers, and document creators for each feature got added to the respective projects. Apart from these, there were central teams that worked on all the features such as PR and testing. These teams ran a project each of their own to track their work for this launch. In all, we had about forty projects.

One of these is worth a special mention; the leads and mentors project. The purpose of this was to track and make sure all other projects would get done in time for the launch. There is a task here corresponding to each of these other projects. The mentor or lead in charge of that project posted a weekly status update here as a task comment. This provided visibility to the leadership and if some project fell back, the problem could be easily identified and fixed.

Having a place online to get inputs from all sources results in better decisions than pulling everyone into a meeting room. First and foremost, this gives everyone time to think through and hence come up with better things to say. It also increases participation as the response can come from a convenient place and time.

Many new feature ideas got vetted through such discussions in the Zoho Projects feed. Mocks were put up as statuses and the team commented on what they felt worked and what didn’t. Use cases got listed out and analyzed in the ‘pages’ module.

“Zoho Projects has changed the way we work as a team and has made it very social,” says Guru, one of the technical leads. The whole team gathering in the same room is a very rare occurrence. Most of our meetings are spontaneous one on one interactions to solve a specific problem.

3. Make the work exciting and get more done

All work could have some uninteresting portions, that nevertheless need to get done. Gamescope, which became a part of CRM through this launch was already a part of Projects. It makes routine work fun by letting those involved create games around them. Those who make good progress win trophies and badges that they get to show off in their profiles and leaderboards.

The feedback from our own sales teams was important to validate our ideas for this launch. But a salesperson busily making calls to meet her targets may not be exactly keen on reporting all problems she faces with her CRM. So we gave our sales folks an incentive using Gamescope.

We announced a bug bounty, that was run as a game in BugTracker. Those who reported the most number of bugs won the games and they could take home gift vouchers.

“Instead of forcing a few co-workers to give me their feedback, Gamescope made people want to participate,” says Dolly Draze who ran the bug bounty. “The results: over 600 individuals checking our UI, over 200 bugs filed, 4 hard workers recognised and rewarded and a clean product.”

BugTracker was used to log and fix bugs. You can use this as a stand-alone Zoho app if you want to do just bug tracking or an add on for Zoho Projects. We do the later. Here is what this lets us do. Remember the Projects we created for each of the launch features? The initial unit testing and integration testing happens right here. The bugs are logged, tracked and fixed within the bugs module of these projects themselves.

Apart from these, the testing team has its own central project. They test all features and log the bugs they catch here. The comments tab within the bugs comes in very handy in this scenario. If the developer to whom the bug is assigned and the tester want to exchange more information, they can do it right here in context.

The custom view feature is used to manage releases. Each release is given a code; TB65, TB66, M340 and so on. Each bug that is logged is associated to one of these releases. A custom view is created for each release that shows all its bugs. If there are no showstopper bugs in the view for a release, that’s a good sign that things are set to go.

5. Make use of the whole spread

Zoho Docs and Zoho Chat are two more apps that can be used both as part of Projects or stand alone apps.

The chat channels came in handy for quick decisions. The leaders had to make a last minute call before the launch, and they had a chat channel precisely for this. A marketer wanted an image in the website changed, he pings the designer who sends the corrected image over chat. Similarly PR and Events team had their own channels to make their quick calls.

Zoho Docs comes with creators for documents, spreadsheets, and presentations. Our marketing team is in Chennai, India whereas many content reviewers work out of our Pleasanton, USA office. The docs are online and that means they could be shared between all. The creators from India would turn in the Zoho Writer Docs in the evening in India. Soon, the sun would rise in America and the reviewers would go over these and offer comments and suggestions. And by the time they were done, the creators in the other corner of the world would be ready to work again.

The presentations we ran in the launch event were created using Zoho Show. Again co-creation was common. A speaker would be tweaking text in one of the slides. At the same time, a designer sitting far away would add a squiggly into another one. Zoho Showtime helped us make these engaging and deliver them with a punch.

Zoho Sheet our spreadsheet software got filled with matrices that helped track stuff like who was in charge of what activities and what marketing campaigns were planned for what features.

Visit our integrations page to see a complete list of apps that add power to Zoho Projects.

In less than six months since launch, 88% of all our customers have switched to the new version. “I have been consulting Zoho for years,”  says Paul Watts from Gold Coast, Australia, “and this is the best release yet.”

This launch has convinced us that doing all the work, especially during a major project, using a single platform is the best way to go. Try this approach for yourself, if you haven’t already. Pick a project and go the Zoho route all the way. Use Zoho Projects for planning and co-ordination, and tracking your time and expenses. Use Chat for the quick discussions and Docs for creating, sharing, and delivering your documents. Once you see the effectiveness and ease this brings, you wouldn’t want to do it any other way.