With the constant chaos of the Twitter-verse, it can be hard to cherry-pick and view just the content you’d like. But what if we told you there’s a way to come close to solving that problem?

Businesses with a Twitter strategy need to soak up a lot of information on a daily basis. For this to happen, it’s important to be up-to-date on not just all things Twitter (conversations and trends) but also what the people and businesses that matter to you are saying on it! Put simply, social media monitoring and listening are crucial to any social media strategy.

As is often the case in life, the answer is simply to get organized.

Getting your Twitter feed well-organized is one of the best ways to selectively track it in a way that makes sense for your business. That way you can choose which information is necessary, even on a dynamic network like Twitter that has thousands of tweets pouring in every minute.

So…is there a magic spell that can organize your Twitter-feed better? Yes, and it’s called ‘Twitter List’.

Not unlike regular lists, a Twitter List at its heart is essentially just a way for you to organize Twitter profiles and prioritize information, to make life simpler. It aids you in cutting through the noise, ensuring only tweets from handles you hand-pick can appear, from among all the hundreds of handles you may be following. Can you imagine how massively useful it is to a social media marketer and brands in general? Tracking Twitter closely is not easy, but a List can help with many things:

Categorizing – You can organize Twitter handles based on things like profile-type, the demographic, purpose of the handle and more. You can organize it in ways that make sense for your business.

Curating – Here you can organize lists based on the type of content that the profiles tweet about. This can further be based around common interests or activities. For example, this list for all the NFL teams that revolve around just updates from the teams themselves or team members.

Networking – Creating a list of a few people, who can get to know each other can be useful. Ideally, these networking lists are best kept small, as too many people clutter it up and make it hard to see who’s posting what.

Monitoring – Lists can be created for the express purpose of social media listening and monitoring, to be up-to-date with just information from hand-picked profiles.

Building niche groups – These lists can serve a specific purpose, acting as a social glue for small communities of like-minded people with a common interest or touch-point. For example, NYC startups that just lists entrepreneurs and investors from the New York area.

Cataloging using the Lists feature can be super useful on a platform like Twitter that’s got large volumes of information flowing in continuously. There are broadly 2 kinds of lists that you can set-up on Twitter – Public Lists & Private Lists. While access may be the key difference between these two types of lists – as Private lists are only visible to those with access to your Twitter credentials- their functionality becomes so vastly different in the hands of an efficient social media marketer. Both lists can find effective use-cases and can help your business manage Twitter round the clock!

In this blog, we’re going to look at the various ways in which you can put Twitter-lists to use to help your social media marketing. First here’s a quick run-through on how to create one, to get started.

Step 3 – The Lists page will display two categories: ‘Subscribed to‘ which has all the lists that you have subscribed to, and ‘Member of‘ which displays all the public Twitter lists that your profile has been added to.

Step 4 – Fill out the fields like ‘List name’ and ‘Description’ in the box that appears.
This is how it looks on your screen. 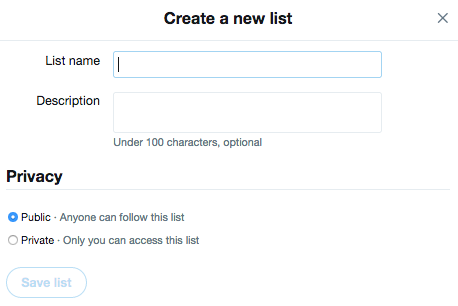 Step 5 – You can choose to set your list as either Public or Private. Your public lists can be accessed by anyone, and anybody can subscribe to it. Private lists, on the other hand, can only be viewed by you and won’t be visible to anyone (not even the profiles added to the list)

Step 6 – Once you’ve created your list you’re ready to go. You can now add people to the list with one simple step. Click on the profile of the person/business you want to add to your list, and click on the overflow button right next to the ‘Follow/Following’ button and click on ‘Add or remove from Lists‘ to add them to your pre-created Lists.

Note – You can add a profile that you don’t follow to your Lists as well.

On Zoho Social, it’s much simpler to set-up Twitter and manages your Twitter Lists. Take a look.

If you’ve connected your Twitter handle to Zoho Social, you can easily set-up the lists from your Monitoring Dashboard and set it to Private or Public mode directly.

You can not only view and monitor the Lists that you set-up, but also the ones you’re subscribed to. Just click on any of the lists to add it to your existing monitoring columns!

It may seem like a lot of work, but it’s worth the effort, you can uncover a goldmine of contacts, avenues, and resources this way. Each T-list has its own unique URL, so you can even publish your lists on your blog, or website and get people to notice and subscribe to it. This helps in three ways:

Now that we’ve gotten to know the basics of what constitutes a List and how it’s being used across the board, let’s look closer at public & private Lists, and how your brand can use them for your business.

1. Interest groups – You can be the social glue between people of the same niche or sharing similar interests by creating a micro-community with a List. Not only can you follow your interests closely, but can help the Twitterati to meet others on common ground. We don’t need to explain just how useful that exposure can be. For instance, this List of major tech bloggers and reporters.

You can follow suit and create relevant public Lists that are useful for people in your niche. If you’re a travel and tourism business, you can create a List with up-and-coming travel bloggers. Not only can the bloggers get to know others in their industry, but it can also be a go-to source for people interested in reading travel blogs.

2. Hobnobbing – Do you want to interact with the big-wigs in your industry, and brands that are popular on Twitter? Maybe you just want to get them familiar with your brand and what you do? Creating a List for the who’s who in your field is a great way to do just that.

3. Businesses you trust – One way a Twitter handle that doesn’t have too many followers can gain trust, is by being featured on Lists. Once you’ve been built up a sizable following and a bit of credibility on Twitter, you can add businesses that you support and work with on a List for your followers to see. It’s not just good publicity for them—it can also help strengthen those PR ties!

Disclaimer – On the other side of this, if there are profiles of questionable repute on your List, it can negatively affect your brand image. Exercise caution before clicking.

4. Event Lists – Want to socialize and get to know attendees before a conference? Simply create an event-specific List! This can be a great way for your business to initiate a conversation with others, but instigate networking for people attending the event. If you’re the host of the event, there’s even more reason to go for it!

2. Follow the industry pulse – Knowing the who’s who of your industry and following them on social media can be super useful. But how to do that effectively on Twitter? Simply add influencers, experts, and speakers from your industry to a List, to keep abreast of their updates.

3. Organize key contacts – Many businesses have that list of people they want to track on social media. They could be journalists in the field, business partners or even associate businesses. You can stay on top of all their tweets by creating a separate T-list for key contacts. That way you don’t miss out on updates from people that matter to your business.

4. Exclusive customer circles – One of the best ways to touch base with your best customers and followers is to create an exclusive T-list with them. This way you can easily build your relationship with these players, and also get to know their requirements to retain them for the long haul.

5. Curate select content – If you’re researching on Twitter and want to filter information based on your topic, you can create a List and add handles that focus on whatever you’re looking for. This not only helps sieve out exactly what you need but also cuts down on your scrolling-time in a big way!

Of course, it doesn’t end here. Twitter-lists are versatile and can fit into as many use-cases as your business can think of! So try it out and let us know how it worked for you, in the comments below. Feel free to share  your favorite lists, while you’re at it! The essential guide to marketing on LinkedIn