This is the guest post from Gaetano DiNardi, the Director of Growth Marketing at Nextiva and has a track record of success working with brands like Major League Baseball, Pipedrive, Sales Hacker and Outreach.io. Outside of marketing, Gaetano is an accomplished music producer and songwriter - he’s worked with major artists like Fat Joe, Shaggy and loves making music to stay turbocharged. 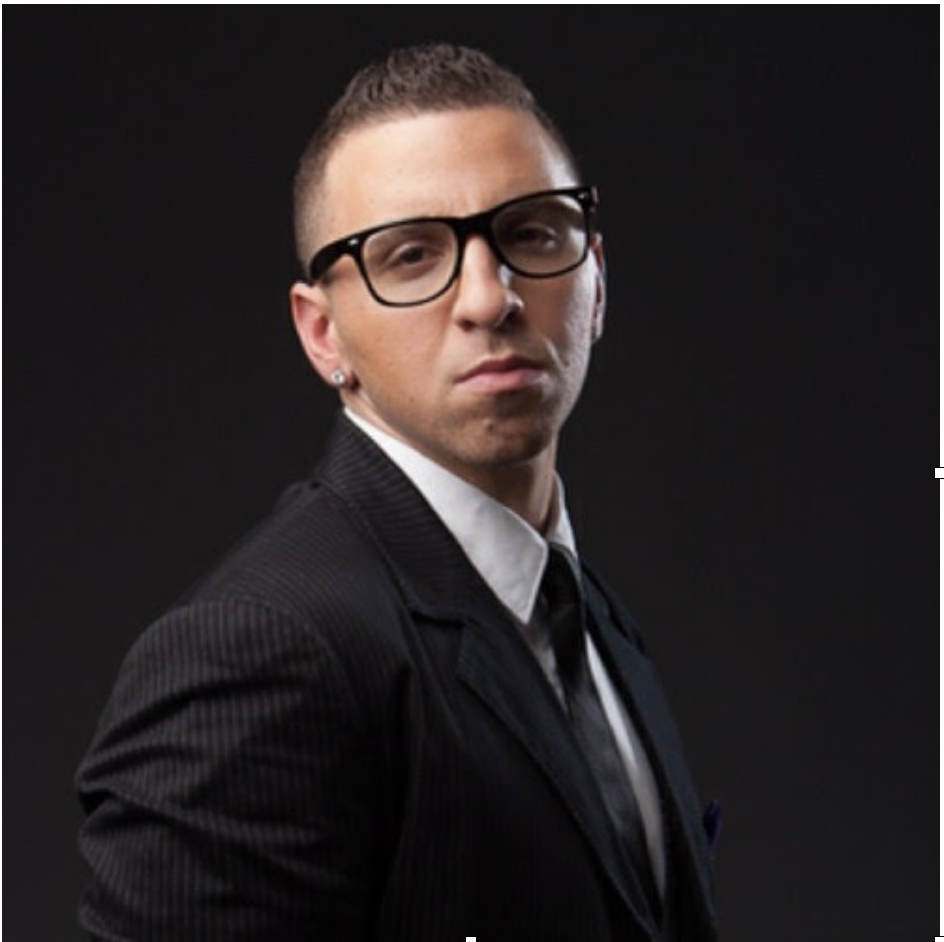 A few years ago, LinkedIn was the go-to place for sales reps.

They blitzed the platform with aggressive sales tactics and direct messages that gave the entire network a bad reputation. “Only go on LinkedIn if you want to be pitched to” was the motto.

These days, it’s hard to seem genuinely interested in a person that asks you to add them to their network without there being a sales pitch attached.

The worst part? While you’re waiting for that inevitable prospecting message, a slurry of posts will flood your news feed. This type of content has exploded so much that Buzzfeed coined an official term for it: broetry.

Which crowd your LinkedIn feed…

And make you feel annoyed that you clicked it.

Yawn. No wonder LinkedIn gets such a bad rep if that’s the type of content we’re competing with.

The key to succeeding on LinkedIn—and often going viral—is to be personable.

Ditch the broetry and treat LinkedIn like a forum for discussions, debates, and authentic conversations. It’s the best way to prove you’re not just there to sell.

Here are nine LinkedIn content ideas that ditch the broetry and the hard selling—and instead, build genuine relationships with your target audience:

1. Stir the pot with opinion posts

Opinion posts work incredibly well on LinkedIn. People who use the platform are professionals who want to hear from other thought leaders.

But when I say “share an opinion,” I don’t mean an opinion that everyone else has.LinkedIn users want to take part in discussions. Everyone having the same opinion can be boring.

Stirring the pot—and sharing an unpopular opinion or perspective that someone hasn’t heard before—stands out much more than one which is a carbon copy of the other 100 posts in their news feed.

Here’s one of my long-form LinkedIn posts that slots in this category. I took a claim that another LinkedIn influencer in the space had made, and spun it around. I talked about why I thought that claim wasn’t true, and why.

Coupled with a few relevant hashtags, the post got 500+ reactions: 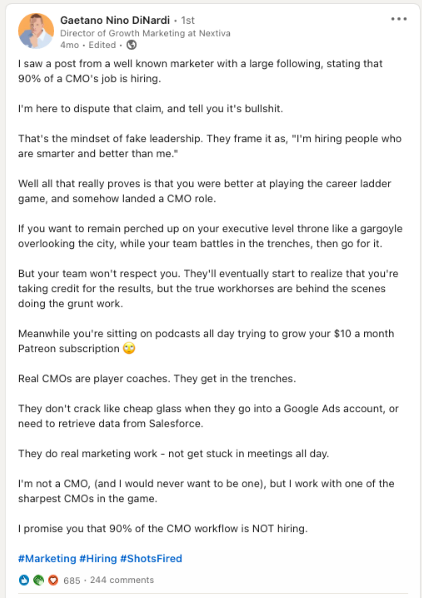 Speaking of stirring the pot, another great way to go viral on LinkedIn is to post controversial videos. They take something your industry already knows about and put a spin on it.

Take this video I posted, for example. My controversial opinion was that cold pitching on LinkedIn just didn’t work anymore. So, I asked our CMO at Nextiva to share eight cold pitch examples sitting in his InMail. Then, I read them off to 50 people in a mall word-for-word so sales reps could see how awkward these messages were in real life.

These controversial videos work well because the LinkedIn algorithm likes their users to watch videos. They’ll spend more time on their network, which leads to high engagement rates, and potentially build a stronger connection with the person starring in the video.

It’s why this video got over 100K views in the first week.

Did you know that 60% of brand-created content has no meaning in consumers’ lives?

They scroll past your LinkedIn posts like it never existed.

However, content that does grab their attention is stories, especially those with emotional hooks.

Stories unlock empathy in our brains. So when you’re posting stories on content, your audience starts to relate to you, rather than scrolling past your post in their news feed.

Take this example from Dan Price. Back in 2015, he famously left his million-dollar salary so his staff could all earn $70k. Despite it being almost six years ago, Dan regularly shares the story on his LinkedIn profile. It gets more engagement than most of his other posts because of the strong emotional hook: 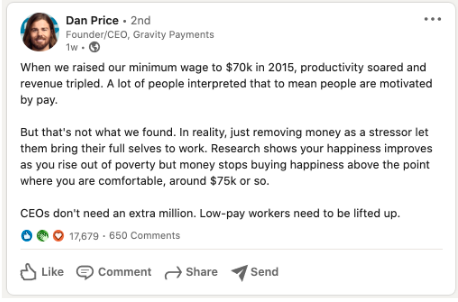 On a similar thread to storytelling, people love watching failures. As humans, we find it amusing to watch people fail. Sharing those failures on LinkedIn is a great way to build a rapport with your connections and show that business isn’t always a highlight reel.

Take a look at this LinkedIn post from Kirsty Hulse, for example. She grabs a snippet of a video where something embarrassing happened to her and shared it with her audience.

Even if you don’t make the epic failure yourself, sharing other people’s mistakes makes for great original content—as Chris Walker demonstrates: 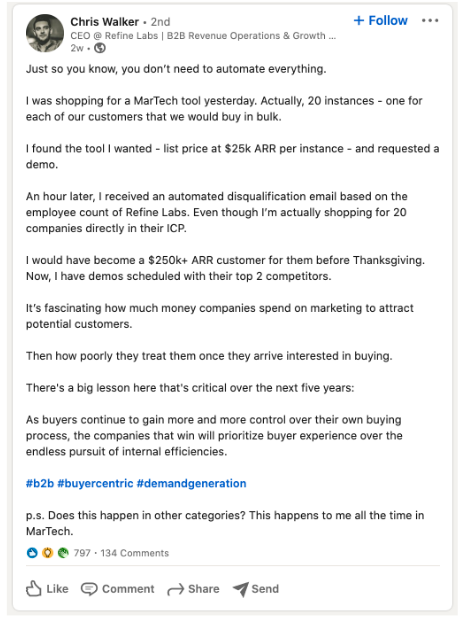 5. Open the floor to discussions

While many still have LinkedIn as part of their social selling strategy, its users want to engage, connect, and discuss topics with other professionals. Think about that when you’re posting LinkedIn content.

A great way to build engagement is to open the floor to discussions. Start with a bold or provocative question, and invite your audience to comment on their opinions.

The goal is to spark a healthy debate that everyone wants to add their two-cents to. But even if you’re simply asking people to comment with their opinions, those comments could see your posts bubble to the top of a news feed. If you didn’t know, LinkedIn’s algorithm places a higher value on posts with tons of comments compared to tons of likes.

We can see this in action with Joel Klettke’s post. The opening sentence is a question that hooks you into reading the full post: 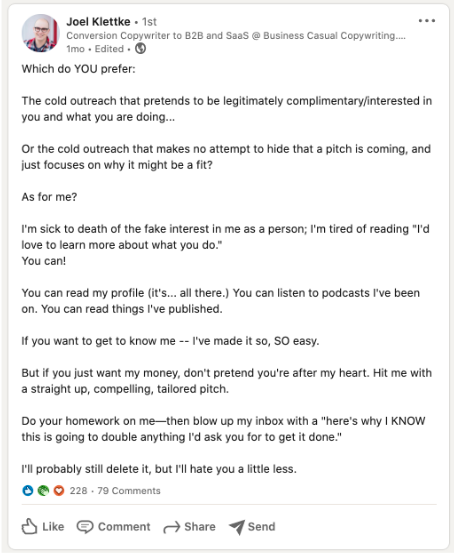 Anna Holopainen does a similar tactic. She kicks off with a question and answers it herself in the post. There’s a closing sentence inviting her connections if there’s anything they would add: 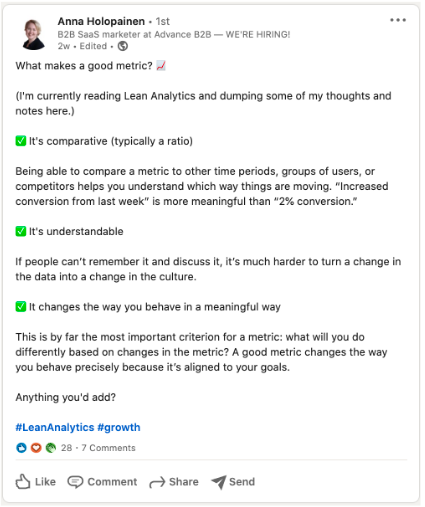 Think about it: when you post content raving about how awesome your new product is, how much engagement do you get? Not a lot.

No matter how much you want them to, the people behind LinkedIn profiles don’t care about your brand, product, or “new and exciting feature”, which is rarely that exciting anyway.

They care about what impact your content has on their life and whether they can relate to it.

Take this LinkedIn post from Amy Volas, for example. She’s a talent manager who helps sales teams find top reps. But instead of talking about the boring ins and outs of hiring staff, she makes the content personable. Amy plays on human behaviors and emotions in her LinkedIn content. It’s much more powerful than the process she uses to hire talent: 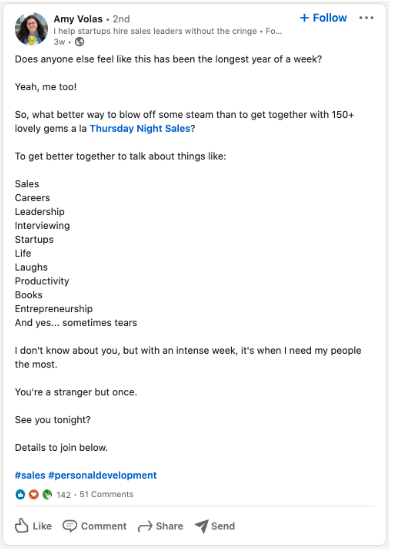 Sometimes, sharing product-focused content is inevitable. You can still apply the same human approach to this, though, by putting stories front and center.

Ditch the “here’s why we think our product is so great,” and use a case study from your customer. Lend your own LinkedIn profile for them to tell the story. Not only is it much more credible when the praise doesn’t come from you, but your audience can relate to the people sharing those stories.

7. Go behind the scenes of news stories

Got some exciting news in your industry? Chances are, everyone will be talking about it.

The only problem is: if you’re only reporting facts or sharing news, you don’t have a spin that makes your followers more likely to read your LinkedIn post over the hundreds of others in their feed.

This example from Harry Dry has that spin. He references a tweet that everyone in the marketing space was going crazy for, but not in the same way others did.

Instead, he dug into the story and pulled an interesting fact and perspective. That’s the secret to creating news-related LinkedIn content that actually stands out: 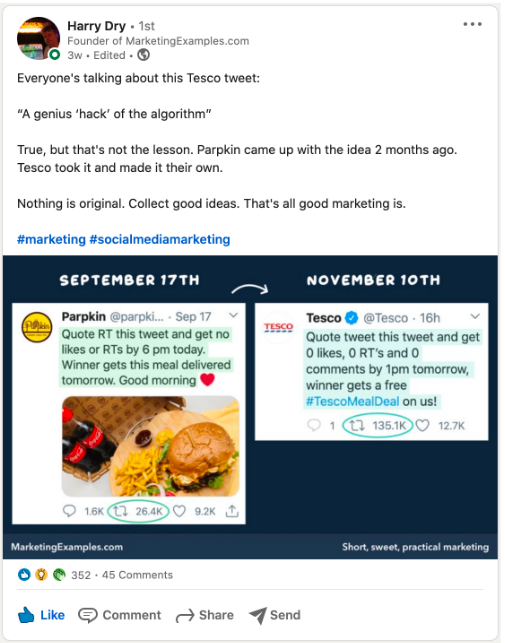 People have a hardwired bias to love free stuff.  Our brains feel a positive charge when we’re offered free and unexpected gifts. That makes your LinkedIn connections more likely to engage with your content and claim a free offer if there’s an incentive for them to do so.

Start to think about the type of person you want to reach with your LinkedIn content. What would you like to have if you were in their shoes?

This can vary dramatically by industry, but some examples include:

Take this post by Dave Harland. The objective of his LinkedIn post was to get people to sign up for his newsletter. But instead of a boring message that asked his audience to do something directly, he told a story to promote the free stuff you’d get access to if you subscribed: 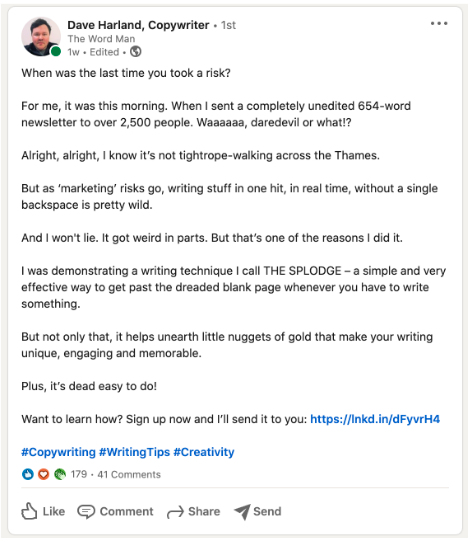 Talking of free stuff, you don’t always have to send LinkedIn users away from the platform. That’s why text-only posts perform better than those with external links.

LinkedIn wants people to spend more time on their site—not swan off to your landing page. Your odds of gaining massive reach are much bigger with pure text, it doesn’t make sense for them to promote content that directs users off the platform.

Create text-only content by sharing bitesize tips that people can read and action directly from their news feed. That could be:

Here’s how Ross Simmonds does that with his LinkedIn content: 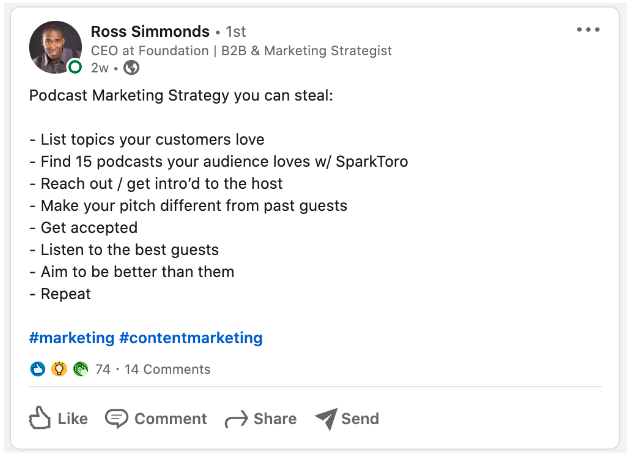 The best part about this LinkedIn post idea is that you’re not asking your connections to do anything. You’re simply giving free value and asking for nothing in return. That’s what builds trust.

Ready to start creating LinkedIn content that reaches and engages new people and doesn’t fit the same old broetry mold? Consider using one or more of my content tips above.

Remember: LinkedIn is a social network, not an open invitation to pitch your services to anyone and everyone. If that’s your goal, then go buy an email list.

Think about what your connections actually want to engage with. That isn’t broetry, it’s well-thought-out content that shares unique opinions, entertains them, or invites them to take part in discussions. It’s called social media for a reason.

Marketer by day and writer/poet by night! I get the dopamine rush when my thoughts are put down as words or poems. A person with big time OCD (Obsessive Cinema Disorder). Staying ahead in the market using competitor analysis How to choose the right social media platform for your business 5 things to include on your social media content calendar The beginners guide to conversational marketing Social media trends to look out for in 2019