Everyone who spends a copious amount of time on social media knows how hard it is to build a sizeable following from scratch, especially on Twitter. And as much as numbers don’t tell the complete story, it’s inevitable for a business to want a follower count that can double as bragging rights.

So how do you do it? Where do you even start? Let’s look at how you can grow an audience on Twitter in four simple steps.

Brands trying to be funny and flawed on social media was a fad that has long passed. Users now expect a neat, crisp that gets to the point right away, and the first step to that is your Twitter profile. Make sure your profile picture and Twitter header are clean, high-resolution images that accurately depict your brand. Include a bio that tells new followers exactly what your business stands for. And don’t forget to include your website URL. Not only does this make for a convincing first impression, but it’s also essential for acquiring the coveted Twitter verification badge for your brand. FedEx’s profile is a fantastic example of getting the Twitter profile right. 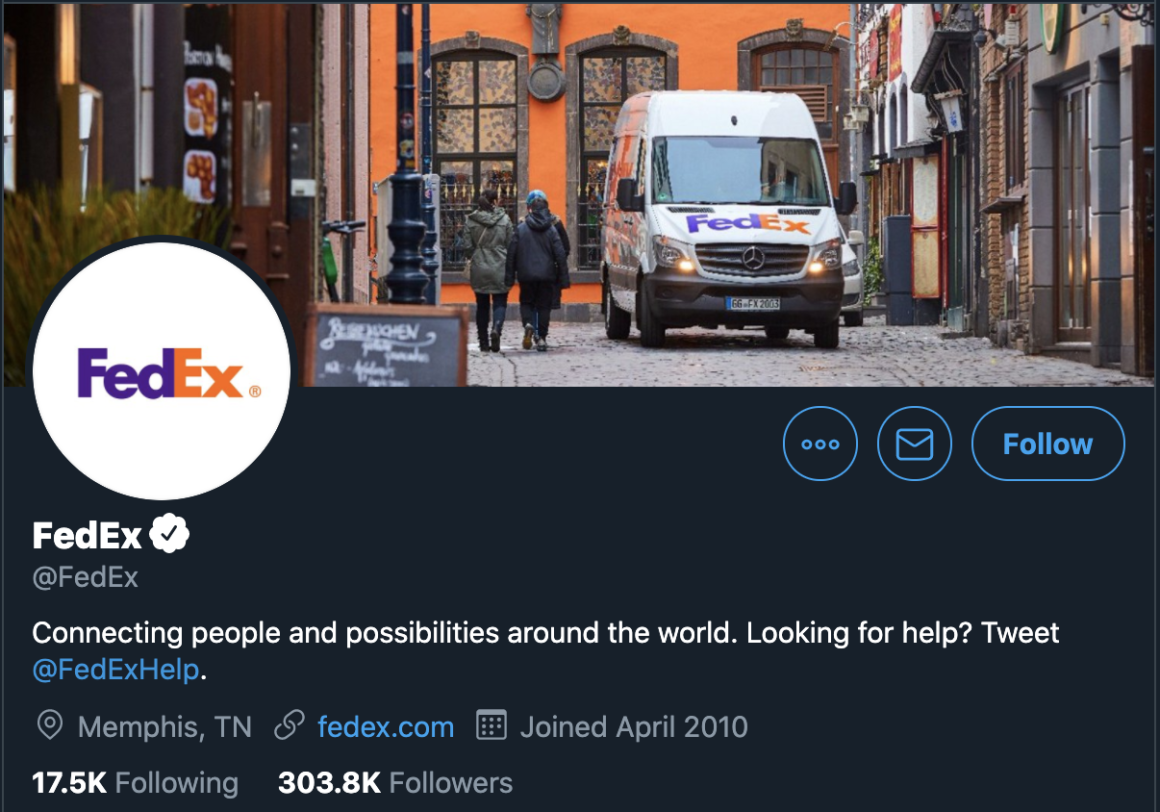 There are two sides to tweeting—being proactive and being reactive.

The first is crafting tweets of your own. Although this includes promoting your brand and all of its content, it’s not necessarily limited to just that. One of the best ways to gain followers is to provide content that’s actually valuable—to be useful to your audience and contribute to the community. This can include behind-the-scenes glimpses, articles relevant to your industry, or blogs from influencers. Tools such as Visme, for instance, also let you craft infographics, which can be used to post tips and statistics in an interesting manner. You can also tweet interactive polls or opinion posts that can make for engaging Twitter content. You can also monitor trending hashtags to either cash in or put your own spin on it, which can also help you gain visibility. When tweeting, make sure you generously use images, GIFs, and maybe even a few short videos along with some complimentary text to contextualize the media. More often than not, visual content works better than plain, verbose tweets.

And while it’s not important to time your tweets to a tee when you’re just starting out, it helps to keep an eye on which tweets gain the most traction. Use a Social Media Marketing tool to find out when your audience is active and what type of content works best, and then put them together to schedule tweets later as your follower count grows.

The second aspect of tweeting is interacting with people. Got a compliment from a customer on Twitter? Retweet it immediately or, even better, quote the tweet and express your gratitude. A witty remark about your brand from a follower? Respond to it with a reply that will bring a smile to their face. This builds good rapport with your social media circle while also helping your account gain visibility among the right crowd.

While some accounts boast a huge number of followers, it might not translate directly to all their tweets gaining traction. Once you’ve spent some time on Twitter, it is easy to identify the most active accounts in your industry and bank on their Twitter presence to rub off on you too. Look out for conversations related to your business or brand that are currently happening on Twitter and frequently involve yourself in them.

Apart from interacting with influencers and moving with the livelier social media crowd, you can also search for and follow the people you already follow on other platforms. This makes your brand more familiar to your followers, and the more often they see your profile, the greater the chances of them interacting with you.

In general, ensuring that you feature your new social media account on a different, already existing network is an excellent idea. Promote your business’s Twitter account on all other platforms. If a tweet does extremely well, post it on your Instagram stories. Discuss your trends on LinkedIn, or even borrow trends from a different network and bring them to Twitter and start a conversation. Make sure your social media accounts are visible across channels and not limited to just one website. This will not only provide a good initial burst of active followers for your Twitter account, but it will also keep the numbers snowballing over time.

Did we miss something? Do you have more ideas for increasing that follower count? Let us know in the comments. How to write the perfect Twitter Bio for your brand