It’s a fact of life—everyone loves to laugh.

With so many brands fighting for attention, users are often drowning in a sea of information. If you’re funny, you’ll probably stand out from the crowd, and that will help you get attention from your followers. In fact, it’s been proven that humor goes a long way in making your content more shareable—with this study identifying humor as the appeal that makes most content viral.

If you’ve decided to use humor, you should probably remember that the kind of humor that works on other media, such as the television or the radio might not work on social media. Also, keep in mind the networks that you’re going to be on, and choose your style of humor based on that as well.

If you’re going to be funny online, there are some caveats of course. You need to be able to come up with genuinely funny content, for starters. The only thing worse than no entertainment is poor entertainment, and your brand’s social media presence can take a hit if you’re doing it wrong.

However, when it’s done right, it can work wonders. Your content will get shared, and you’ll get noticed.

But how do you get it right?

Let’s take a look at some popular brands on the internet, and see how they’ve used humor in their social media content.

KFC is not generally known for being a “funny” brand online, but there’s a reason why we put them up there. Their official twitter account follows only 11 people: 5 members of the Spice Girls and 6 people named Herb. That’s right. The KFC Twitter account follows 6 Herbs and 5 Spices. We see what you did there, KFC!

And then, during the royal wedding, they tweeted this:

KFC knew that the entire world would be glued to news of the wedding that day, and they took advantage of it to make a little joke.

What you should be taking from them is that you can create a good impression on social media if you’re calculated in your use of humor. It’s a good idea to keep your eye on the news or upcoming events that you can “news-jack” to your advantage, and adding humor to the mix will make it even better.

Coca-Cola recently reached 80 years of operation in Australia. To celebrate, they changed their display picture to their logo, except it was upside down. Because you know… down under.

But they didn’t stop right there.

The brand then proceeded to come up with funny replies to people who commented on their picture. For example: 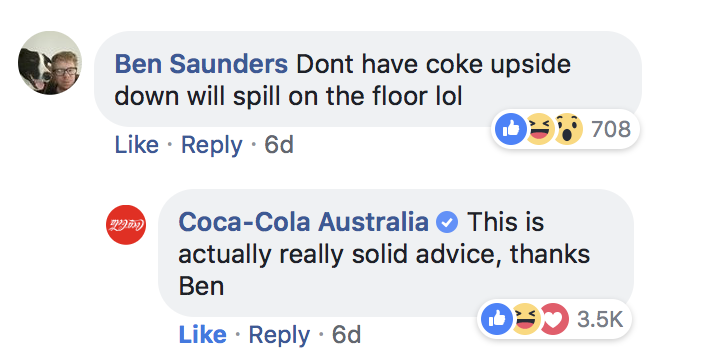 Ben tried to troll them on their profile picture. Now, Coca Cola could have easily ignored this. No harm done. But because of their use of sarcasm, they come off as funny and lovable. Who doesn’t want to be associated with someone like that?

Or how about this? 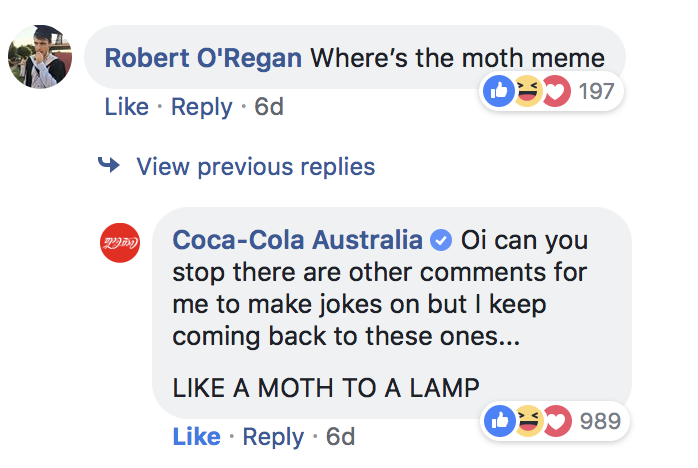 Again, there was really no need for them to reply to that comment. But having conversations with people makes them feel connected to you, and if you’re able to be witty, that’s even better! Your customers will love you. 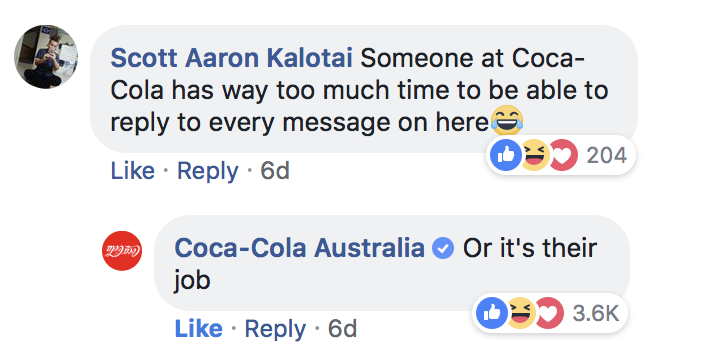 If you’re having these kinds of conversations with your followers on social media, people will love it. Everyone may not enjoy interacting with a brand, but almost everyone loves talking to funny people.

However, for something like this to work, it has to be done the right way. Note how, while Coca Cola is being witty, they aren’t insulting or putting down anyone. They come off as a friendly person that you’d like to spend time with. And if you’re able to pull it off, these are the kinds of reactions that you’ll be getting.

You can be sure that these people are going to be telling their friends about your page.

I’ll be honest—whenever I see a Wendy’s, I’m going to be walking in.

Wendy’s has become popular for “roasting” people on Twitter. They respond to trolls and negative comments online with very witty and slightly aggressive responses, and everyone loves it.

Here are a few examples:

This is not a one-off though. Wendy’s has been taking shots at McDonald’s, among other competitors, for quite some time now.

Replicating this kind of success is extremely difficult without coming across as an imitation. Because Wendy’s has broken almost every traditional rule there is—their replies walk the fine line between funny and rude.

One thing to keep in mind while reading Wendy’s tweets is that they’re not being sassy or rude to followers who ask them legitimate questions. Their roasts and insults are mostly directed at either people who try to troll them, or at competitors’ brands. That, however, is in addition to answering genuine questions on Twitter.

Wendy’s doesn’t stop at just roasts. Their Twitter is generally a witty place, and they’ve used humor effectively throughout their content. For example:

While Wendy’s has been the most popular of the lot, other brands have also tried their hands at maintaining an edgy, sassy profile.  Some of them only roast trolls, or in some cases, people who ask to be roasted.

You’ve probably heard of them.

MoonPie has quickly become one of the most popular brands on social media, and that is because they have focused heavily on one key ingredient—Character.

Reading MoonPie’s tweets, you could be forgiven if you thought it was not a brand, but just another person. Their tweets reflect the sort of absurdist humor that is popular among teens today. And that’s intentional—MoonPie knows what their target audience is, knows what kind of humor will work for that demographic, and so they chose to go ahead with it. For example:

We don’t even know why that’s funny—but it is.

MoonPie’s absurd tweets make their account seem more human. The picture of MoonPie in my head is a lonely, awkward man who misses his ex-girlfriend Linda. And this is the image they deliberately put across in most of their tweets.

This is slightly different from what the other brands mentioned in this article have done. While Wendy’s, Coca-Cola, and KFC all have used humor to nice effect, their humor stops with reflecting a humor style, or a comedic voice. They stop short of creating a “Character”, that MoonPie has very cleverly done.

In fact, MoonPie’s character is reminiscent of traditional Mascots, such as Chester Cheetah of Cheetos or The Duracell Bunny. These characters were created to represent the brand’s attitude, and how they wanted to be perceived but there was one problem—The consumers could never truly connect with them.

That is until Twitter came along. And MoonPie has made the most of it.

What you need to keep in mind is that these brands all maintain a consistent voice in their humor. Choosing your voice is incredibly important, and it involves using one that suits your brand and the kind of humor that will appeal to the audience you’re targeting.

While trying to create funny content, it’s easy to get carried away and try too hard to create something perfect—and while that might be necessary for some of your bigger campaigns, it’s generally better to keep it natural. All it takes is a little planning—Define your audience clearly, understand their behavior, and then use humor that will be relatable for them. And who knows, maybe your brand will be the next one we all take notes from.

Are there any other examples you think we missed? Let us know in the comments section below. We’d love to hear from you!

What do Banksy’s art and shredded lemons have in common: Marketing genius