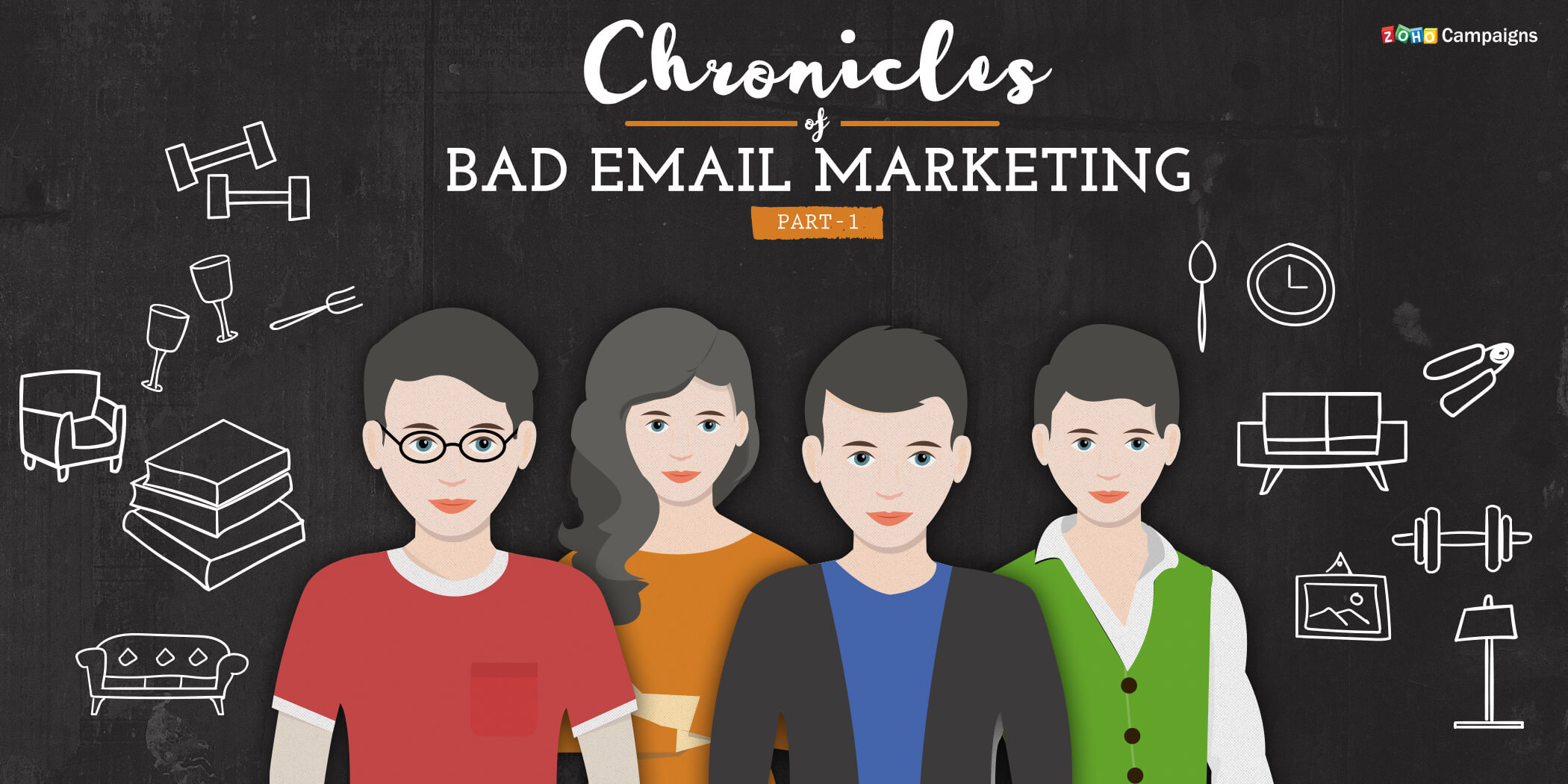 Picture this—you’re planning to send three successive email campaigns to your subscribers, but when you deliver, this is how they react:

After the 1st campaign,

“What’s this? Why would someone send this to me when I didn’t ask for it?”

After the 2nd campaign,

“When will they send me something useful?”

After the final campaign,

“This isn’t doing it for me. I can’t take it anymore!” (*Unsubscribe*)

If your subscribers have retracted themselves from your mailing lists recently, these reactions aren’t just hypothetical. Your email campaigns put off by your subscribers, and each one brings them closer to the unsubscribe button. What brought them to the edge? What is making them decide to give you the hard goodbye? It’s simple. Your email campaigns weren’t relevant to them, and were making their experience frustrating.

Let’s meet seven incompetent email marketers. Each of them have their own story; something you shouldn’t be doing if you want to be a successful email marketer. Read on to know about four of these people who make mistakes that will teach you how not to do email marketing.

Darren has recently opened a bookstore and plans to host a promotional sale that will entice his customers to buy more books this year. He chose email marketing as a means to reach out to his audience, and started to design his campaign. When it came to choosing a subject line, he never spent much time on it, thinking it was the least important aspect of his campaign. Unfortunately, his wordy, cumbersome subject line and mismatched pre-header text caused his campaign to perform poorly. Darren thought he could win customers with content and design alone, but all it took to sink his campaign was a boring subject line.

Bob owns a fitness equipment shop which caters to customers across the globe. As the new year approached, he wanted to wish all his customers well, and inform them about a discount he is offering to mark the start of the year. He wanted his campaign to personally connect with his customers, so he meticulously crafted the message.

He sent his campaign to a mailing list containing all his latest customers from different countries. He pinned his hopes on this campaign, only to be disappointed when he saw a poor campaign reach report. Bob made the mistake of sending the same content to all of his recipients at the same time, without considering their time zones or relevance of content. On the whole, there was no personalization at all.

Quick tip: It’s always better to send out personalized emails because they catch your audience’s attention. For instance, instead of “Hello” as the greeting, use “Hello, <customer name>,” to make your readers feel like your message is meant for them. Additionally, segmenting your mailing lists helps you target your audience better and send them the right content. If Bob had created location-based segments for his mailing list, he could have sent relevant emails to his customers in different time zones.

Claire runs an online store for home decor and interior designs. Managing and delivering orders are a large part of her business. To engage her customers, she regularly publishes blogs and articles about the trends in the market. Email marketing helps her to stay in touch with her subscribers, and keep them updated about all the happenings in her business.

Her latest plan was to send an email campaign to her subscribers with a sign-up form for further emails, a unique coupon code, a couple of e-books, and some links to her recent articles. With all of this content, she thought her campaign was perfect. However, she was surprised, when it only received a few clicks.

Quick tip: Each campaign that you send should stick to a single concept, with content delivering a clear purpose. Claire created a campaign with too many calls-to-action, confounding any person who reads the campaign. When there are too many CTAs in your campaign, your recipients wouldn’t know which action to perform, and your campaign will flounder.

Michael understands that an email campaign is one of the best ways to engage his restaurant’s visitors. He wanted to invite them to the opening of his restaurant’s new location. Michael’s goal was to create a visually-appealing campaign so that his customers would be instantly attracted. Using colorful images, promotional videos and chunks of page-long content, he wanted his campaign to contain detailed information in a stunning way.

He hit the “Send” button and waited for his customers to queue up on the grand opening day, but he was clueless when he saw that his campaign didn’t draw in a crowd. What went wrong?

Quick tip: Generally, your campaign shouldn’t have too many images because when your recipients try opening your email, it might take a long time to load and can be frustrating. The usage of videos should be carefully planned, so don’t overdo it. Avoid incorporating multiple images while including a video in your campaign. Your content should be curated and carefully placed. It should be short, crisp, and aligned perfectly, with key points being highlighted. This way, your campaign will look classy and neat, not messy and haphazardly done.

Alright, that’s enough for today. Check back after two days to read about the final three misguided email marketers. If you know anyone like this, we’d like to hear their story in the comments.

The next part of this blog is out! If you’d like to read it, here’s the link:

Aishwarya is currently into building products at Zoho. She is a techno-futurist and she's passionate about all things product, design, and marketing. She loves writing as much as painting, and certainly wishes to retire on one of those seascapes she paints.