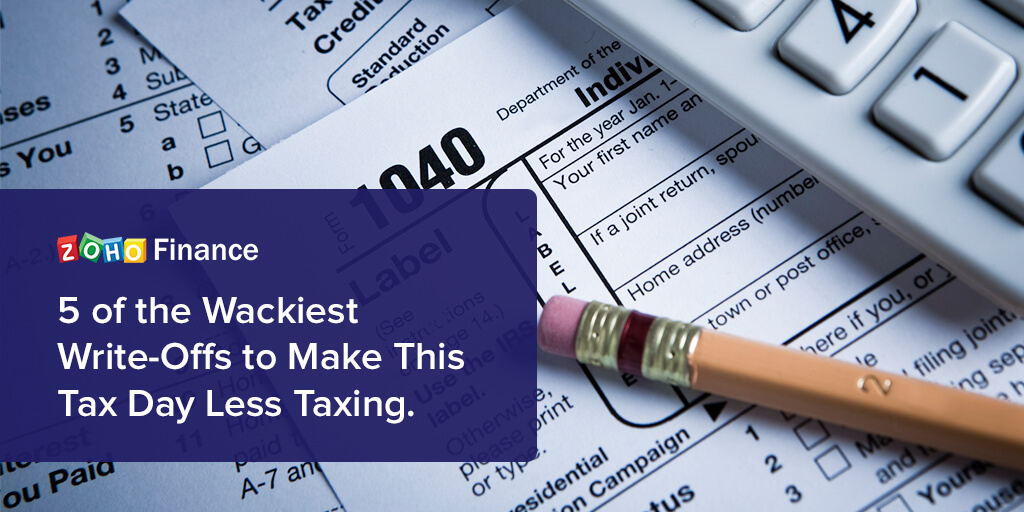 Laughter might not boost your write-offs, but we promise this article will give a good ROI.

Since ancient times, death and taxes have both been certain: If you couldn't pay the Pharoah his 20%, you could work on his pyramids—where your imminent death was an event that you could count on. But thankfully, in ages more modern, we have one surefire way to make tax time less dire. It's called the write-off. It can reduce or eliminate your tax obligation. Since you can escape taxes, this leaves death as the only thing in life that's certain. So seize the spring day while you can, and check out our list of the 5 craziest tax deductions.

1. The "Wolf of Wall Street's" ladies of the night.

Jordan Belfort, the stockbroker and money launderer made famous with the 2013 film of his memoir, "The Wolf of Wall Street," included call girls, strippers, and (at least according to the movie), little people, in his tax write-offs. Apparently, committing that kind of fraud gets really expensive. He was sentenced to four years at the Taft Correctional Center and ordered to repay the $110.4 million he cheated stock buyers out of. But, even in prison, he was still getting good deals: He only served 22 months on account of a plea bargain.

Drinking too much, getting a cab home, then thinking you're okay to drive after a few hours, proceeding to slide your car off the road, wreck it, and get arrested can get you a nice...write-off? I'm serious. That slippery slope actually worked! In Rohrs v. Commissioner, the Tax Court let Mr. Rohrs deduct the cost of his car damage caused by his own drunk driving. The Court argued that by not driving home straight from the party, he tried to act reasonably. So, basically, it was a matter of good timing?

4. Plastic surgery for a prop-heavy performer.

Usually, these expenses don't end up as successful deductions. But if you're an exotic dancer who needs the biggest, ahem, assets possible to get the biggest tips, they can be. Although the IRS initially denied the write off "Chesty Love" submitted for her breast augmentation (a procedure that made her a 56-FF), the Court let her claim her "stage props" as depreciable assets. Bottom line? Exotic dancing may be the only industry where you can write off cosmetic surgery.

Unless you're a really successful professional bodybuilder, you won't ever be able to claim body oil as a business expense. Even Corey L. Wheir almost couldn't. Citing the bottles of oil as a personal expense, the IRS rejected his deduction: You don't need glossy muscles to be a bodybuilder. What the IRS didn't understand was that Wheir wasn't just a bodybuilder—he was a superhuman, so he needed to sparkle and shine. The Tax Court got it. They gave him the benefits, proving that the squeaky wheel gets the oil.

Although we don't recommend that you try these outrageous write-offs, we do suggest tracking your work expenses closely, so you can use legitimate write-offs to claim what you can. With an expense management app, you can ensure you don't have to pay more than you have to.