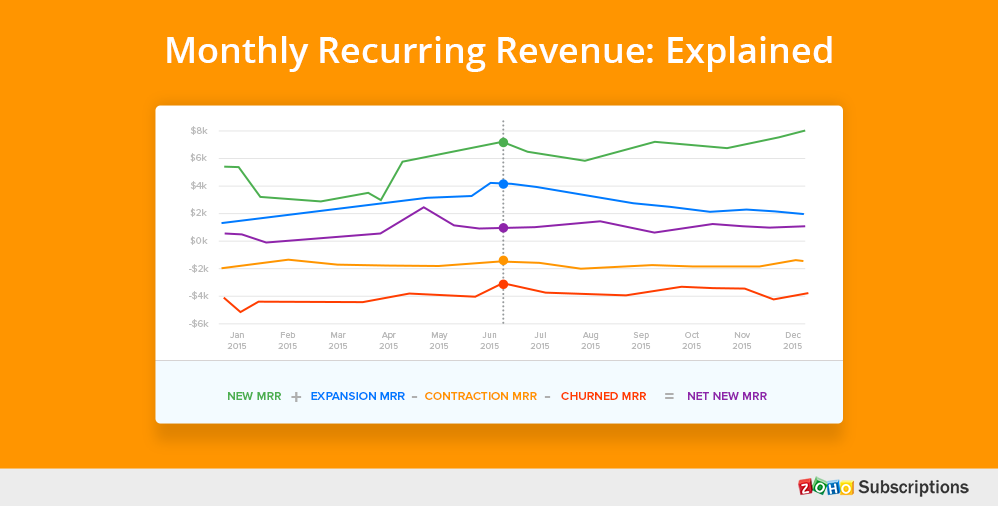 Running a recurring revenue business can be very lucrative.

You acquire customers, and they keep paying you every month. Business is much more predictable. There is less effort involved in maintaining a recurring revenue stream than it is to get new sales each month. Once a customer is acquired, that’s a bunch of revenue gained not only at the moment of purchase, but for many months (or years) after.

That’s why running a subscription/SaaS business is such an appealing prospect.

To track this recurring revenue, the traditional “revenue” metric (used by accountants) isn’t going to cut it. You need a special metric that is tailored for subscription businesses. This metric is called monthly recurring revenue (MRR).

Let’s look at how you measure it.

The basics of MRR

MRR is a normalized monthly measurement of revenue. It gives you the total monthly value of all the subscriptions in your business.

Some complexity arises when you offer annual plans as well. It’s typical for many subscription businesses to offer an annual plan that gives subscribers two months free compared with the monthly plan. How do you calculate the MRR of a plan that is billed annually?

Here, we do something called normalization, which is really just a fancy word for division. To normalize revenue from annual plans, you simply divide the cost of the annual plan by twelve, which tells you the cost per month of an annual subscription.

A quick example: A subscription business has ten customers. Five are on a $240/year annual plan and five are on a $24/month plan. First we normalize revenue from the annual plan by dividing it by 12. 240 divided by 12 equals $20.

That wasn’t so hard.

One of the best uses of MRR is for tracking how fast your business is growing. Analyzing how your MRR changes from month to month helps you make crucial decisions that lead to more business growth.

The number that indicates how much your MRR has grown from one month to the next is called Net New MRR. This is the net amount of MRR that you add over a month. For example, if your MRR is $1,000 in January and $1,100 in February, the net increase in your MRR (or net new MRR) is $100. This number takes into account not only the MRR that you have added, but also the MRR you have lost from month to the other.

From a mathematical perspective, Net New MRR is calculated by putting together four different components:

What does this mean? Let’s break it down.

New MRR is the MRR gained from new customers acquired each month.

Churned MRR is the MRR lost from existing customers leaving you each month. Even if you have the best product and customer service in the world, a few customers are always going to leave you.

We can see how the MRR changes from one month to the next with this equation:

Where n denotes the month.

A quick example: A subscription business has 100 customers paying $10 per month in January. Thus MRR(n) is $1,000. Five of these customers leave, and the business gets ten new customers. Additionally, five of the existing customers upgrade to a $20/month plan.

This is the best situation you can find yourself in:

This means you’re adding so much MRR from existing customers (from upgrades, add ons and what not) that it’s greater than the MRR you lose from customers leaving your service.

When this happens, it means you’ve achieved negative churn.

Negative churn is a sure sign of explosive growth for your subscription business. So go ahead! Move into the bigger office, buy that new phone, and throw that party.

MRR is a simple but powerful metric that gives you an accurate picture of the health of your subscription business. It’s important to check your MRR everyday to make sure it’s headed in the direction you’d like it to go.

That said, we have also created a free tool that allows you to forecast future MRR. All you have to do is enter your current MRR, churn rate and MRR growth rate, and it will tell you how much and how fast your business is going to grow into the future. Check it out and let us know what you think!

If you found this article interesting, subscribe to our mailing list to receive more articles on subscription businesses. If you have any questions, let us know in the comments.