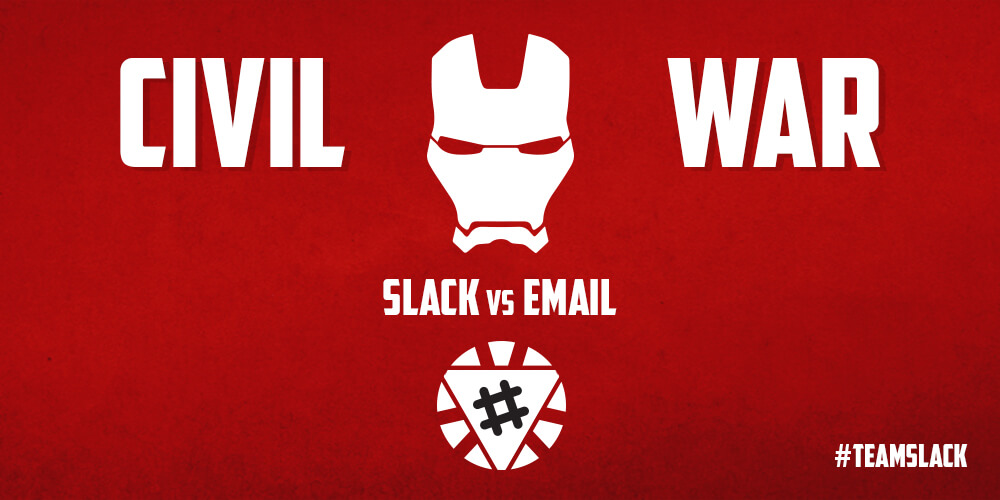 He's rich, he's got the latest toys and he's popular. But is he good enough to take down good ol' Cap'n?

Just like the pigs in Orwell's cult-classic book Animal Farm, who promised to liberate the farm animals from the evils of the farmer's tyranny, only to take the farmer's place in lording over them, new-age chat-based collaboration tools like Slack promised to end the ''tyranny'' that email had (apparently) subjected the world of office collaboration to, but ended up unleashing a tyranny of its own. Meanwhile, email has been silently waiting and watching from the wings.

February 2014: Slack is launched publicly. It's mercurial rise was juxtaposed with the onslaught on email, a relentless smear campaign that led people to believe that email had been (to quote Eminem) ''chewed up, and spit out, and booed off stage." As the shiny new toys began to capture the fancy of the average office goer, many were only too eager to write email's obituary(the very question 'Is email dead?' has been done to death itself). But deep down inside, email just knew that the more things change, the more they stay the same. We'll get to that in a few moments.

said Syndrome in The Incredibles. Every conversation on chat becomes equally important - because there's no filter. And when that happens, NO conversation is important. Therein, lies the problem with Slack. Chat based collaboration, due to being exclusively real-time, is inadvertently intrusive in nature. Every message is screaming for your attention -  'Look at me, I (could be)'m important too!'. Since you cannot prioritize which snippet of conversation to pay attention to, you're sucked into a vortex where you're constantly having to check channels out of FOMO - Fear Of Missing Out.

This takes a toll on productivity, leaving you with little to no time to actually ideate in peace and/or get some real work done. Having to stay constantly updated with a dozen conversations across different channels can get quite exhausting. Imagine all the catching-up that's in store for you, if you've been away from your desk for a couple of hours:

So you end up having to play catch-up, non-stop:

That's just it, you're only ever playing catch-up, and no one is really getting anywhere.

The Slack bubble is primed to burst, if it hasn't already. ''I'm breaking up with you Slack,'' wrote Sam Hulick, in February this year, in his piece on Medium. He definitely wasn't the first, nor would he be the last to decide to call off their little flings. Walt Mossberg, Executive Editor at The Verge, opines that in order to create a sustainable user experience, Slack needs to do quite a bit of catching up itself. But enough of the Slack bashing maybe. Time to look at why email works for you. Why it has for nearly half a century now, and why it will continue to do so.

Email, by design, has an inherent filter built into it. To put something down in an email and send it out to people (and have it stay in their inboxes), it had to be sufficiently important. By contrast, chat-based tools simply do away with this filter. The result? The floodgates are thrown open.

Anyone and everyone can jump into a conversation in any of the umpteen channels and flood it with instant messages. Picture this - you were about to make an important point, and someone hijacks the conversation and takes it someplace totally irrelevant. That's a risk you'll always run with chat-based collaboration.

If it ain't broke, don't fix it

There's not much that has changed with email over nearly half a century of its existence. Which is probably a good thing. Here's why there's no need to re-invent the proverbial wheel: Email has context. The two simple constructs, the subject line and the sender, add that crucial element lacking in a chat-based collaboration tool - context. You prioritize which email to read or not, based on the subject line, and/or the sender. You have control over when you read it - like an actual envelope hand-delivered to you, which you can open only when you want to. You get to decide when you want to be appraised of the contents of an email. It is not forced down your throat like a chat/instant message. Even if you've been away from your desk for a couple of hours, you can rest assured that at best you would probably have a dozen or so emails sitting in your inbox, that require immediate attention (and like I already said, you decide which ones to read and when). With Slack and the likes, you're just helplessly spiralling out of control.

The second coming of email (We-told-you-so)

I'm not saying real-time (Slack) bad, asynchronous (email) good - Slack is one extreme of this collaboration spectrum, and it's just not sustainable, nor scalable. What we really need, is a collaboration tool that manages to establish a healthy middle ground between what Slack and email represent...

Navaneeth just celebrated two years as a Product Marketer at Zoho, and continues to do what he loves most - write creative content.