The next big thing on social, Silicon Valley’s hottest start-up, the fastest growing app, a social media powerhouse—these are just a few things that have been said about Clubhouse, the drop-in audio chat social platform that has, among other things, amassed two million or so users in under a year and made communication largely “masspersonal.”

Elaborating on this concept of masspersonal, here’s an excerpt from an article by the College of Journalism and Communication at the University of Florida:

“Clubhouse offers a 'masspersonal' communication mode where 'a personalized interaction is made accessible to a large audience, yet is intended as a personalized message in that its content is applicable only to the intended recipient, which may be an individual or select audience.' The design of the Clubhouse app has fallen into this communication mode and integrated the advantages of both the radio or podcast program and a two-way real-time interactive social medium.”

In other words, Clubhouse is podcasting and radio’s more interactive cousin where you’re just a “hand-raise” away from jumping into the conversation with your favorite hosts and podcasters. Add to this the exclusivity factor, the FOMO (it’s invite-only), and the chance to listen (and maybe even talk) to the likes of Elon Musk, Drake, and Oprah Winfrey, and you’ve got a pretty tempting package.

But Clubhouse’s popularity doesn’t end there. Its audio-only networking format has gained so much support amongst netizens that almost every second social media platform out there is jumping on the bandwagon and launching their own audio-only feature to compete with Clubhouse. Here are a few examples:

It’s not just social media either. It’s been heard that even Slack is working on a similar tool for their messaging platform—something their CEO, Stewart Butterfield, announced during—ironically enough—a Clubhouse session.

One year into the pandemic, just when people were getting fed up with Zoom meetings and virtual events, Clubhouse introduced something new—an opportunity to network minus the dreaded screen fatigue. Audio-only conversations come with multiple advantages—they are more comfortable, more informal, and more personal as conversations are largely synchronous, authentic, and spontaneous. And they’re also great for multitasking, as can be seen from the rise in the popularity of audiobooks and podcasts in the last year.

So when event planners had an opportunity to interact again in a more casual space after over a year, they took it. Very soon, the event community started getting together on Clubhouse to talk about the events industry, share expertise, and debate topics. It didn’t stop there either. The platform soon became a virtual hangout where more and more event planners met to discuss and dissect the events they hosted. Also, as most of them were amongst the first set of users, they had the early adopter advantage that helped them build their own personal brand as Clubhouse’s event influencers. And here’s where things start getting interesting. Many of them also got to make Clubhouse a profitable side hustle, putting to work their years of experience at planning, hosting, and working the room at events. They became Clubhouse event producers and moderators.

Bre Donofrio is one such event planner who’s hosted hundreds of Clubhouse shows since last December. Elevate Experiences’ Sean Specie calls the platform a “networking accelerator.” He’s also creating an online course, Moderate like a pro. You can check it out and even sign up for the waitlist here. One more example is Rachael Green, a virtual mixologist who spends around six to nine hours on Clubhouse every day.

Building on the idea of a virtual hangout, event organizers started moving their audience to Clubhouse for networking on the side and after-parties. They were mostly events hosted for event professionals like Global Event Collective’s #GMIDParkingLotParty. It was a seven-hour Clubhouse session hosted on the Global Meeting Industry Day (April 8) where event professionals joined in between other activities to hang. 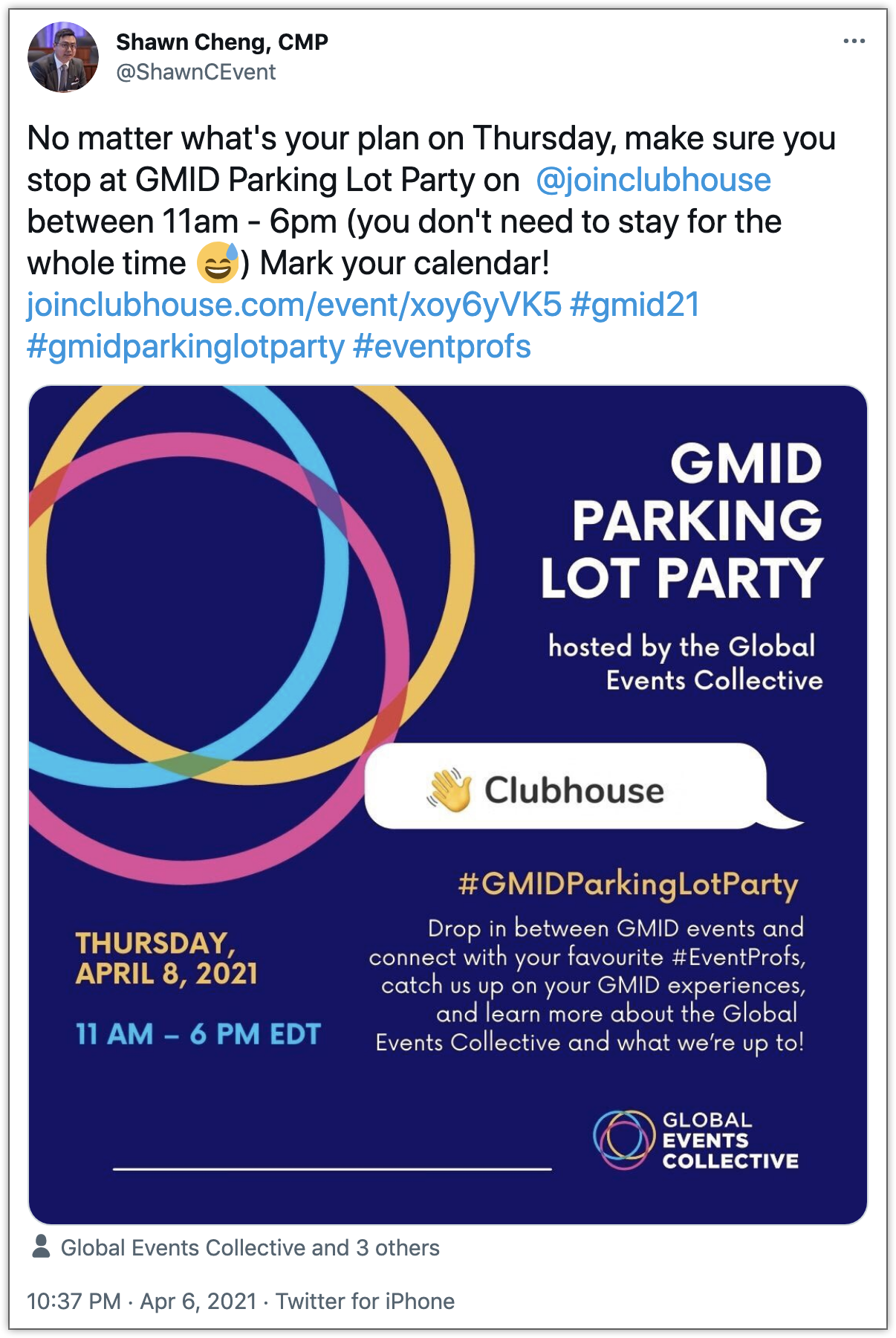 For mainstream events, on the other hand, things were a little different. While audio-only was a hit, Clubhouse wasn't as much because it comes with a major disadvantage—it is iPhone-only and invite-only, which leaves a lot of people out. Of course, this will change in the coming months once the platform scales and they move out of beta—they’re starting to open up their Android app in some regions, but until then, this might pose a setback for most events.

Here’s where alternatives to Clubhouse like Twitter’s Spaces come in. B2B brands like Salesforce (#SuccessAnywhere World Tour After Party) are leveraging audio-only networking through Twitter to extend their connection with customers and users. And with Ticketed Spaces releasing soon, there will be a lot of good options for SMBs, digital influencers, and even big brands to make some money on these events. 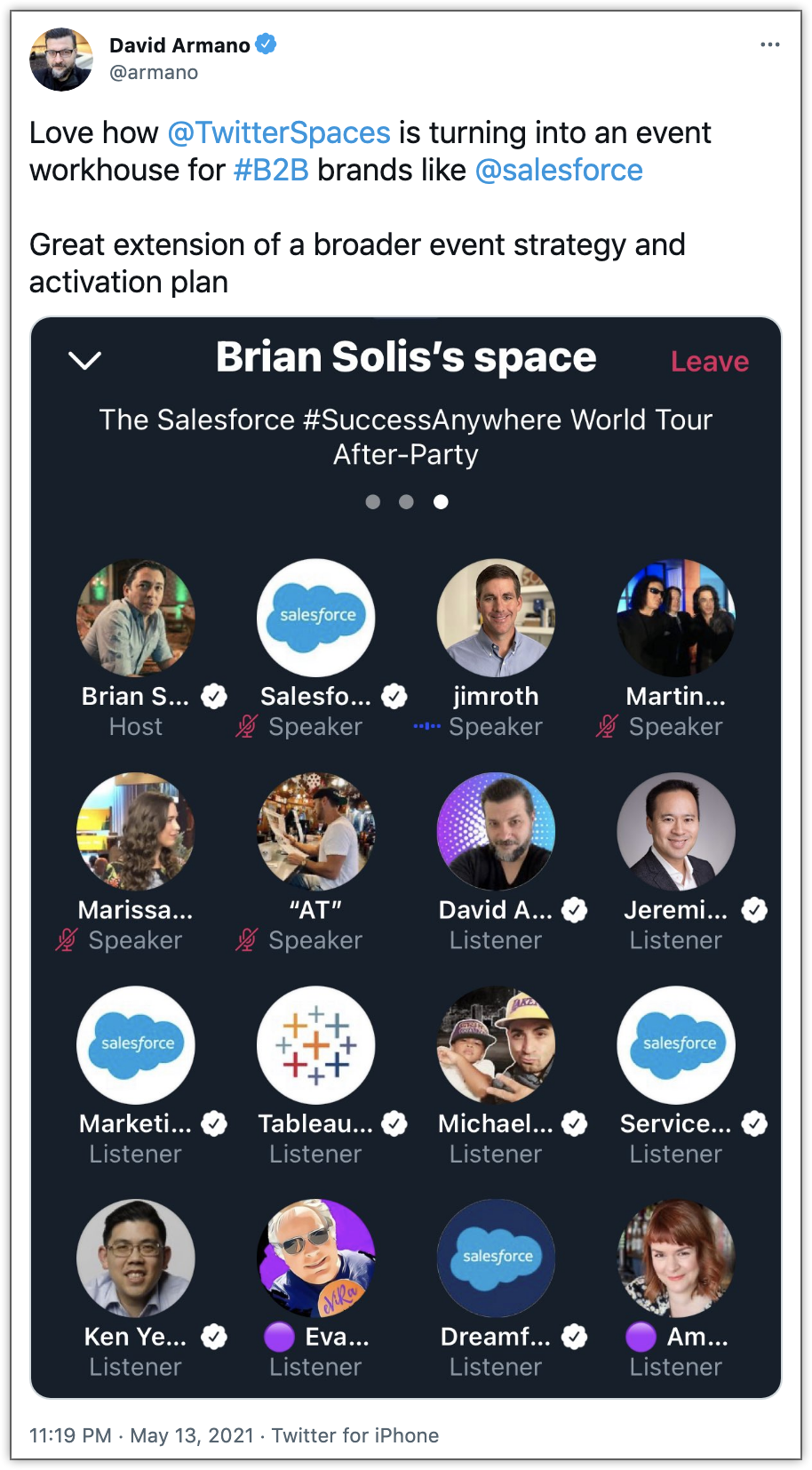 Last comes the whole new breed of Clubhouse-only events that are completely run on the platform. And while they may seem like just old-school conference calls, they're rather successful and have been getting quite a bit of praise. For example, Women Empower X hosted WEX Virtual: Clubhouse Edition entirely on Clubhouse on February 12, 2021. To make their Clubhouse event more accessible to people, they used their Facebook page to share invites and onboard more people onto the platform. This event coupled with regular weekly sessions has grown their member count from around 3000 to around 18,000 members (and around 19,400 followers) in under three months.

On the attendee-side of things, Luke Girgis, CEO of Brag Media, wrote an entire blog—Clubhouse, the best music industry conference I’ve ever attended  —on how the event experience was “completely unscripted, completely real” and had thousands of listeners tuning in.

This brings us to the final question: how are event technology companies reacting to the popularity of audio-only networking? They’ve pretty much jumped onto the bandwagon too. Quite a few virtual event software solutions have already added an audio-only networking feature in the last couple of months. Many more, including us at Zoho Backstage, are thinking about or working towards doing the same. However, while adding an audio-only feature increases the flexibility of a platform, for the time being at least, it won't make it to the set of must-haves, but rather to the set of nice-to-haves.

At the same time, audio-only formats are far from perfect, and event management software companies have to work towards making them more accessible for deaf and hard-of-hearing people. Moderation and anti-trolling features would also be good to have. But this is just the beginning after all, and most of these challenges might be addressed in the coming months.

Clubhouse and drop-in audio are likely to remain a hit amongst event organizers and attendees for the foreseeable future—especially with everyone stressing on the need for 365 engagement wherein you host one big event (which could possibly be an in-person or hybrid one) and a series of virtual events, Clubhouse-style events, and other activities to create an online community that’s engaged all year round.

So is Clubhouse and drop-in here to stay for the long haul? Maybe. For now, all we know is it has a lot of new and interesting possibilities. Make the most of IMEX 2022: A guide for first-time attendees 5 reflections on returning to in-person events beyond COVID-19