Social
/ Home / How-to / To emoji or not to emoji: The social media marketer’s guide

What do Burger King, Star Wars, and Hillary Clinton have in common? (besides earning viral diss tracks, of course).

They’ve all marketed themselves with emoji.

That’s right—netizens have seen a lot from being greeted by the first emoji-fied chicken fry from Burger King to receiving a bro-fist from a cartoon Hillary Clinton ahead of her Presidential campaign. Meanwhile, the Star Wars franchise delivered the world the fan-favorite C3PO and Stormtrooper in emoji form, to build hype around their movie release. Believe it or not; all these were received with the same level of enthusiasm (which says so much about us).

Each of these entities used social media for branding themselves, and leveraged emojis to build hype and create interest around what they had to say to their audience—and they weren’t the first ones to do it.

Emoji have long since shed their identity as smiling buttons, transforming into tools capable of surprisingly sophisticated communication. While the concept of its predecessor, the emoticon “: -)” dates back to the 1980s, the concept of an emoji keyboard was birthed in the 90s. Take a look at the first-ever version of the modern emoji tray, created by the Japanese artist Shigetaka Kurita for the mobile carrier company DOCOMO in 1999. What a long way we’ve come—all the way to celebrating a World Emoji Day.

Today, emoji help in many business verticals, from customer service to marketing and sales. A logistics company even famously communicates expressly with emojis for identifying its consignments.

So why all the hype, you ask?

For one, they make your business seem more personable and human and can bridge language and communication gaps. So it should come as no surprise that brands want to tailor themselves to this new age consumer—by being both playful and expressive. In 2015 alone, over 200 brands used custom stickers and emojis for their social media campaigns.

However, there’s a catch. There always is—even with harmless-seeming yellow faces. It can be tricky knowing where and how to use emoji because you can easily send the wrong signals to the very people you want to make a good impression on.

Tips to keep in mind before you emoji:

1. Know your emoji & your context

If you don’t know what an emoji means, DO NOT USE IT. It’s better to be safe than sorry in these cases, lest you risk offending people on social media. Check an emoji chart to be sure what that yellow face or vegetable means before you put it out there.

To make matters worse, not all emojis translate the same across various platforms. There are at least a dozen emoji that look different depending on whether you’re on Samsung, iPhone, or Google devices—and they can easily be misinterpreted. 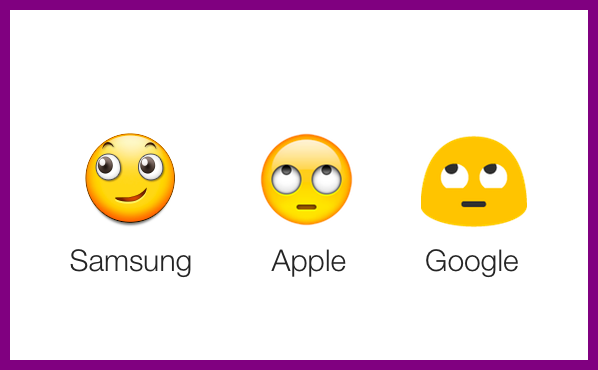 This is the “rolling eyes” emoji on three different platforms. Maybe it’s just us, but we think Samsung users are missing out on a good ol’ judge-y eye-roll.

Keeping it simple goes a long way with nonverbal communication methods, and emoji is no exception to that. Don’t ever overdo your emoji game when trying to be trendy. It’s one thing to be approachable to your followers, and an entirely different thing to come across as gratingly cheerful or juvenile. Constantly sending out a deluge of emoji will probably backfire—we believe modern parlance calls it “being extra”.

Being unprofessional, especially on the customer service end of things, where a brand fields complaints and queries from customers on the regular, can be disastrous. In a marketing context, the problem amplifies. Some brands have gone overboard in the past and received notoriety for doing it. Here’s Chevrolet doing the exact opposite of what we recommend:

3. Match it with your brand

Sometimes it’s okay to not jump on a trend, no matter how widespread it is. While emoji are fun and interesting, they can sometimes be unrelatable—for your brand, especially for your target audience. You don’t want to come across as trying too hard to be hip. Personally, we’d prefer emoji greetings from our favorite pizza place rather than from a courier company.

While it makes up a large percentage of social media exchanges, emoji use is more commonplace in millennial vocabulary than among older demography. If your target audience is largely Gen X or older, it’s probably wiser to save them the time figuring out what this means and get straight to the point.

So your content checks out, and your brand’s tone gives you room for being on the expressive side. Great! Is your choice of social network emoji-friendly though? LinkedIn, for instance, is not particularly geared toward this type of communication with text-heavy content getting a substantial portion of its views. A visual platform like Instagram or the witty, snappy content of Twitter, though, might suit an emoji-studded marketing message a lot better.

Now you know—what you communicate is always important, but how you communicate really speaks for your brand. As media philosopher Marshall McLuhan famously stated, sometimes “the medium is the message“. And while you can say a lot with a single emoji, it works to know when to cut back and when to let loose.