GSTR 9 is an annual tax return that contains details related to the supplies you have made and received during the year. In this guide, you will find the following information:

The GSTR 9 is a document or statement that has to be filed once a year by a registered taxpayer. This document will contain the details of all supplies made and received under various tax heads (CGST, SGST and IGST) during the entire year along with turnover and audit details for the same.

The government has introduced a GSTR 9C audit form, which is to be filed annually by taxpayers who have a turnover of more than Rs.2 crores. It is basically a reconciliation statement between the annual returns filed in GSTR 9, and the audited annual financial statements of the taxpayer.

Latest Update as per the 39th GST Council Meeting


What is the due date for filing GSTR9?

There are 4 types of annual returns under the GST law. They are:

Who should file GSTR9?

How to file GSTR-9 annual return

The GSTR 9 format collects a broad range of information about the taxpayer’s inward and outward supplies, ITC, tax paid, and other factors affecting tax liability for the year. Let’s take a look at what you need to enter in the different fields in each of its six parts:

The first part of the GSTR 9 format asks for your basic details: financial year, GSTIN, legal name, and trade name (if any).

Part 2: Details of outward and inward supplies declared during the financial year

The second part of the GSTR9 format is split into two sections to collect information about different types of transactions. 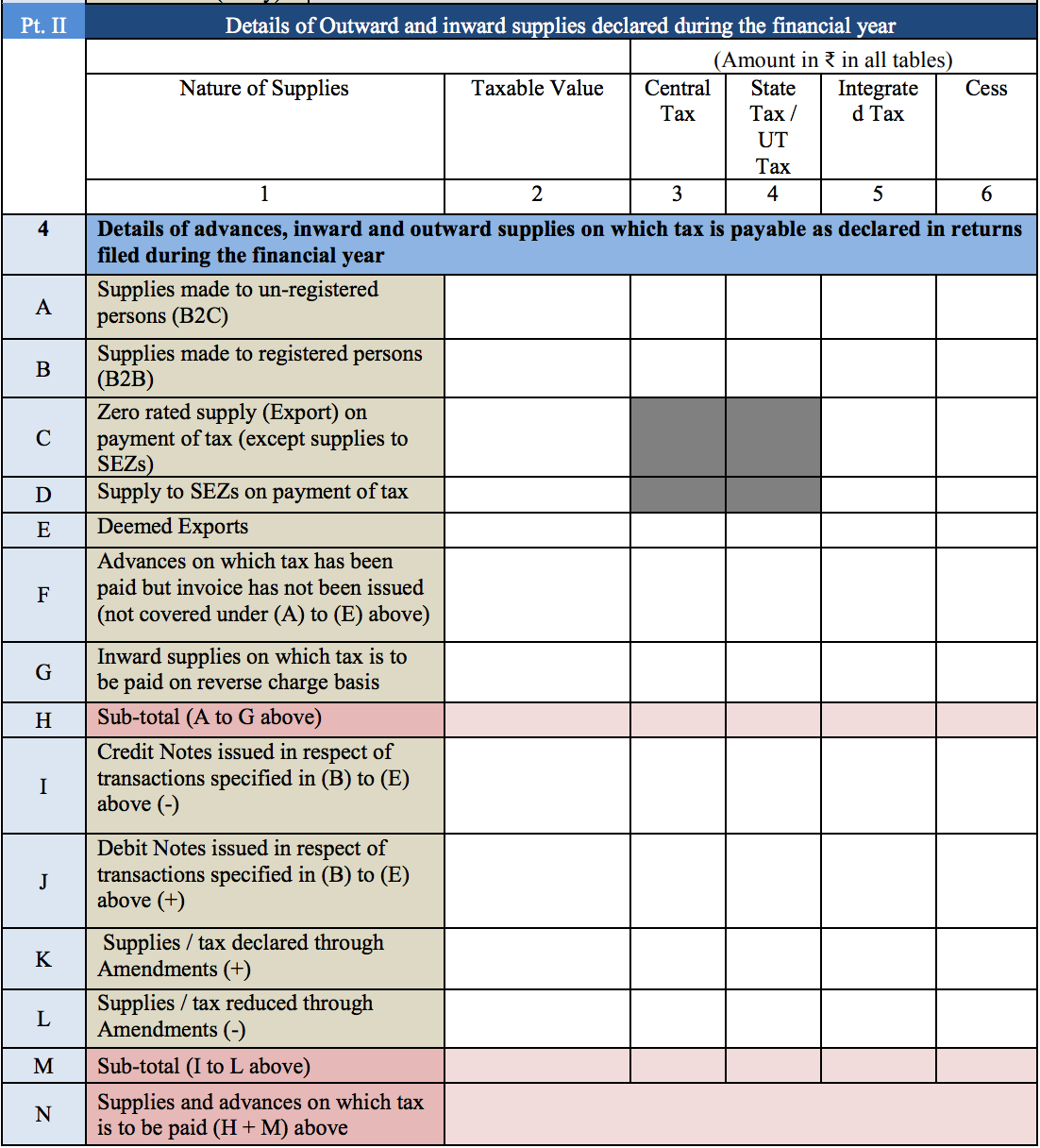 In Section 4, you are required to fill in details of advances, purchases, and sales supplies on which tax is payable. Enter the taxable value, CGST, SGST, IGST, and cess value for the following: 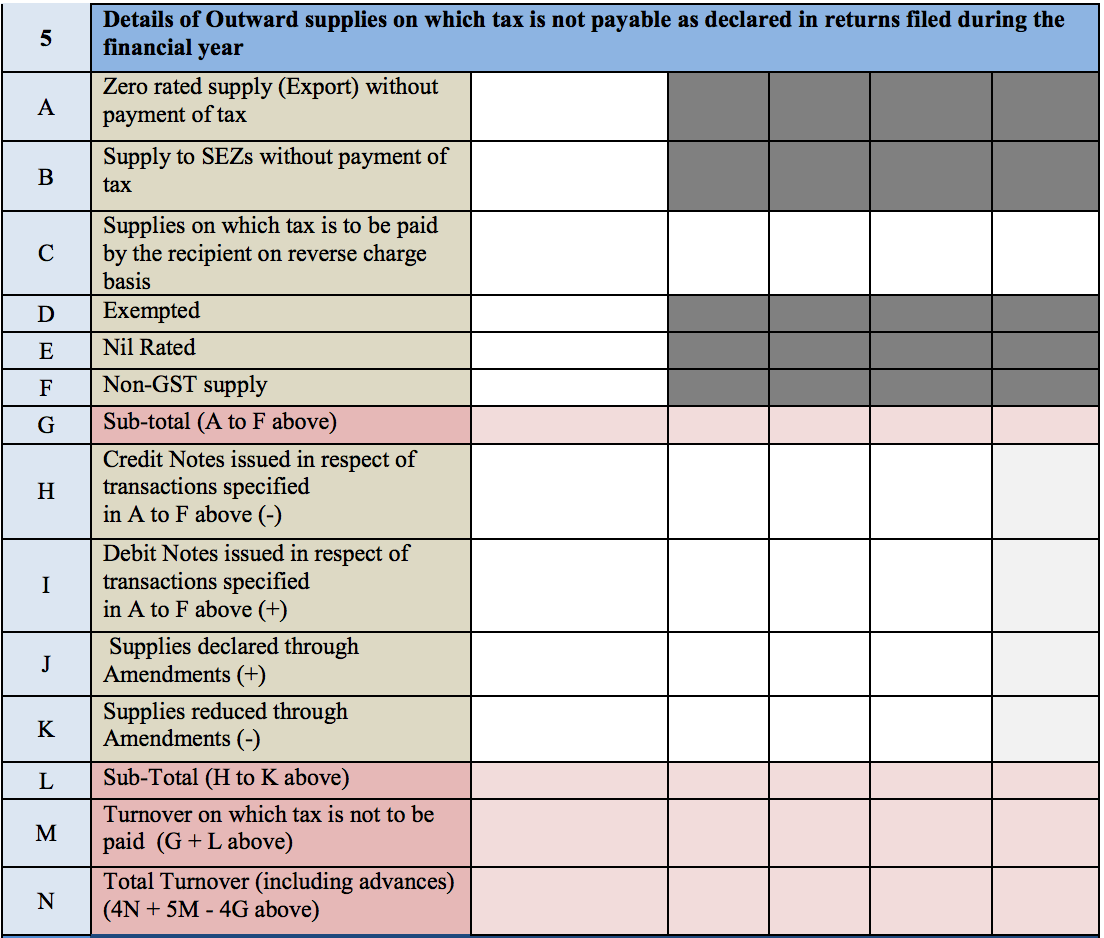 Section 5 asks for details of sales supplies for which tax is not payable, as declared in the returns filed during the financial year. As in the previous section, here you are required to fill out details related to the taxable value, central and state tax, integrated tax, and cess value for the following:

Part 3: Details of ITC as declared in returns filed during the financial year

The third part of the GSTR-9 form is split into three questions that ask about your ITC balance. 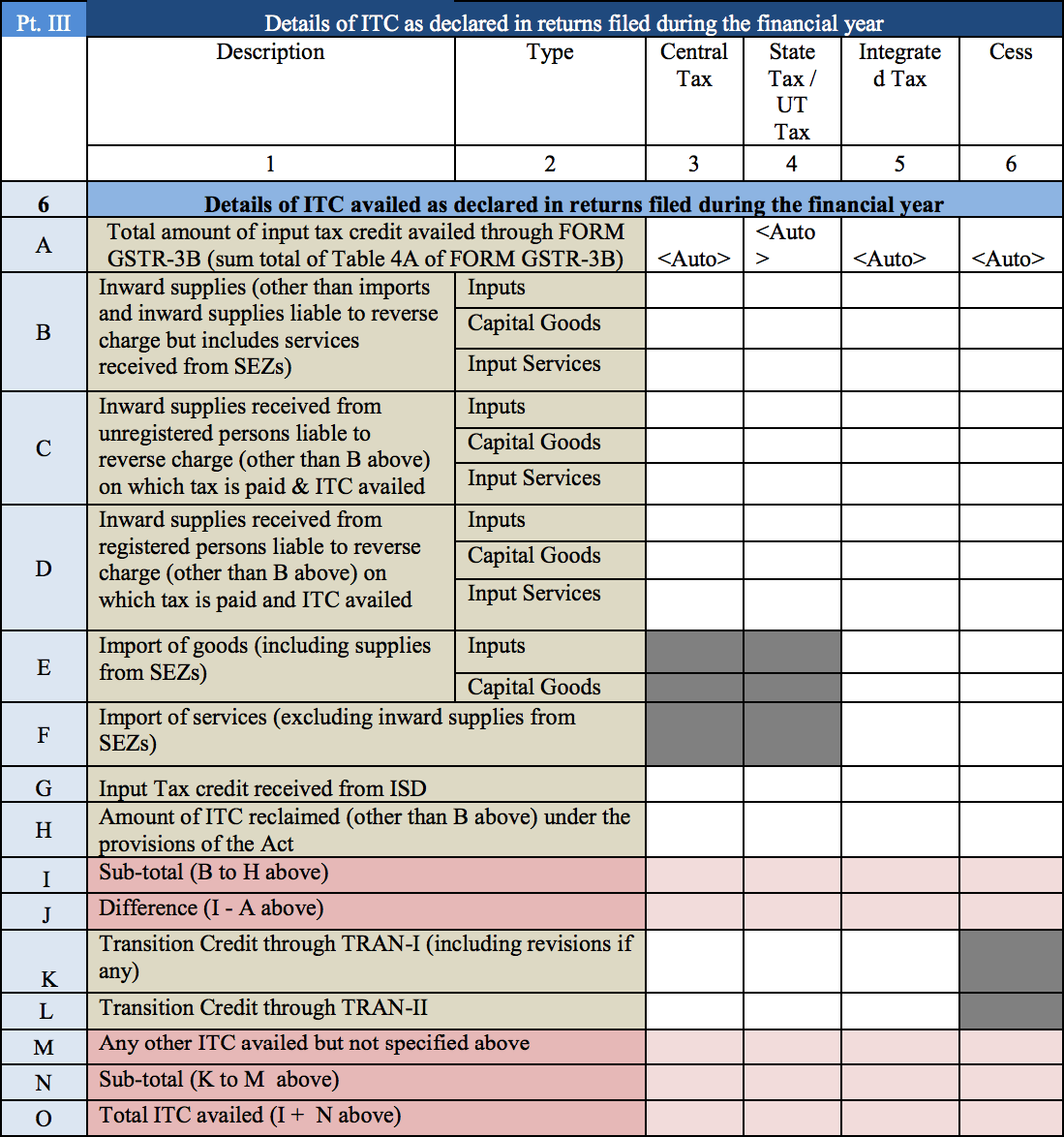 In Section 6, you are required to enter details of ITC that you have availed, as declared in the returns filed during the financial year. Fill in the central and state tax, integrated tax, and cess value for the following:

In Section 7, you are asked to fill in information regarding the reversed ITC and ineligible ITC on the central and state tax, integrated tax, and cess value for the following:

In Section 8, you are asked to provide other ITC-related information. Fill in the central and state tax, integrated tax, and cess value for the following:

Part 4: Details of tax paid as declared in returns filed during the financial year

In this part of the form, you can specify all the details regarding the tax that you have paid and declared in returns filed during the financial year.

Part 5: Particulars of the transactions for the previous FY declared in returns of April to September of current FY or up to date of filing of annual return of previous FY, whichever is earlier 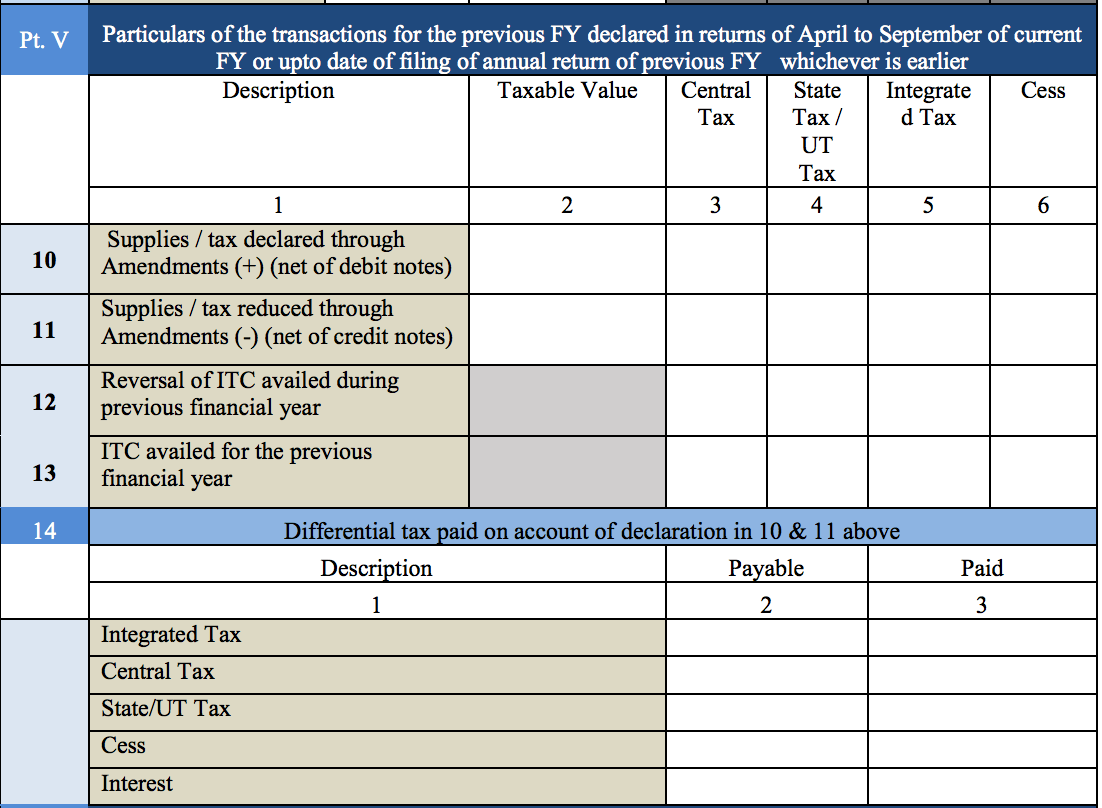 Section 10 is where you can mention all the details related to transactions that occurred during the previous financial year. Fill in the taxable value, central and state tax, integrated tax, and cess value for the following:

After filling in the above lines, enter the differential tax payable and paid for the following:

The final part of the GSTR-9 form collects information that hasn’t been provided earlier, such as demands and refunds, certain special kinds of supplies, HSNs, and late fees. 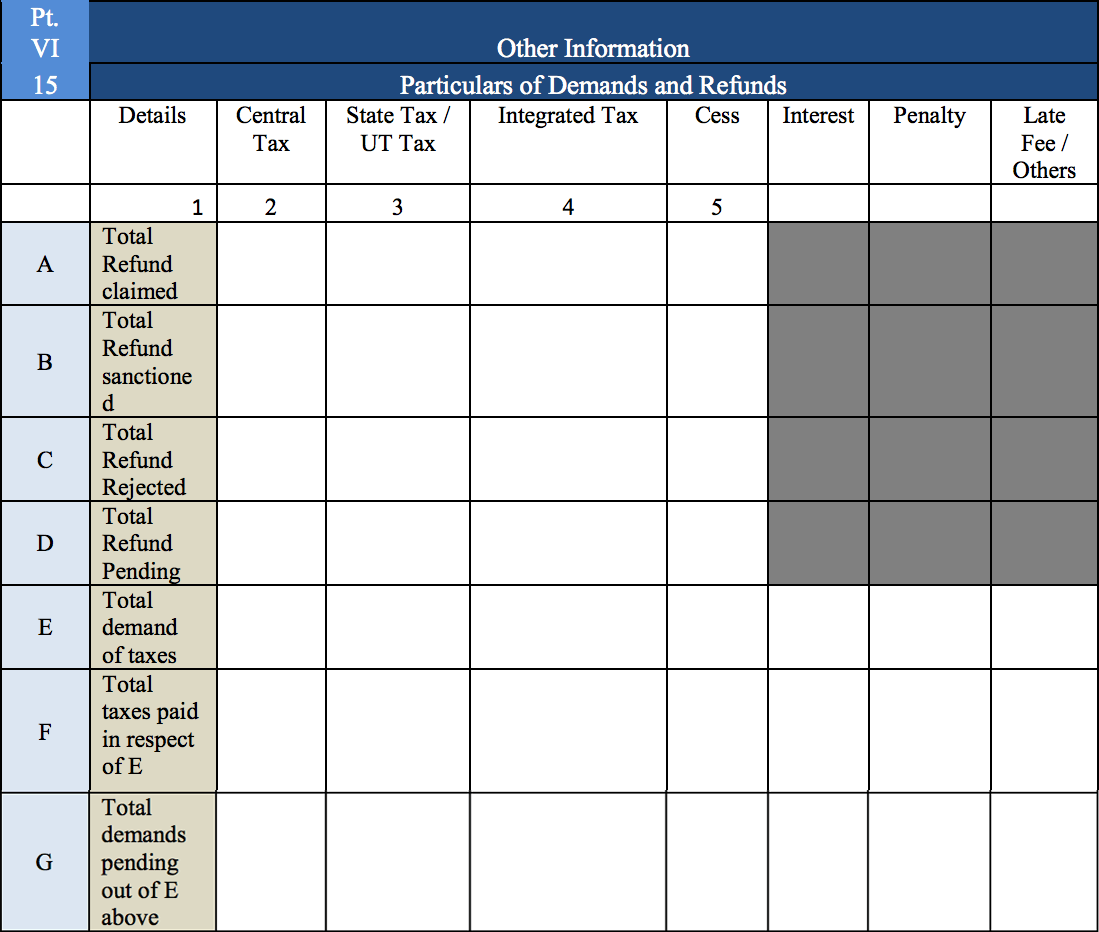 In Section 15, enter information about demands and refunds by filling in the central and state tax, integrated tax, cess value, interest, penalty, and any late fee applicable for the following: 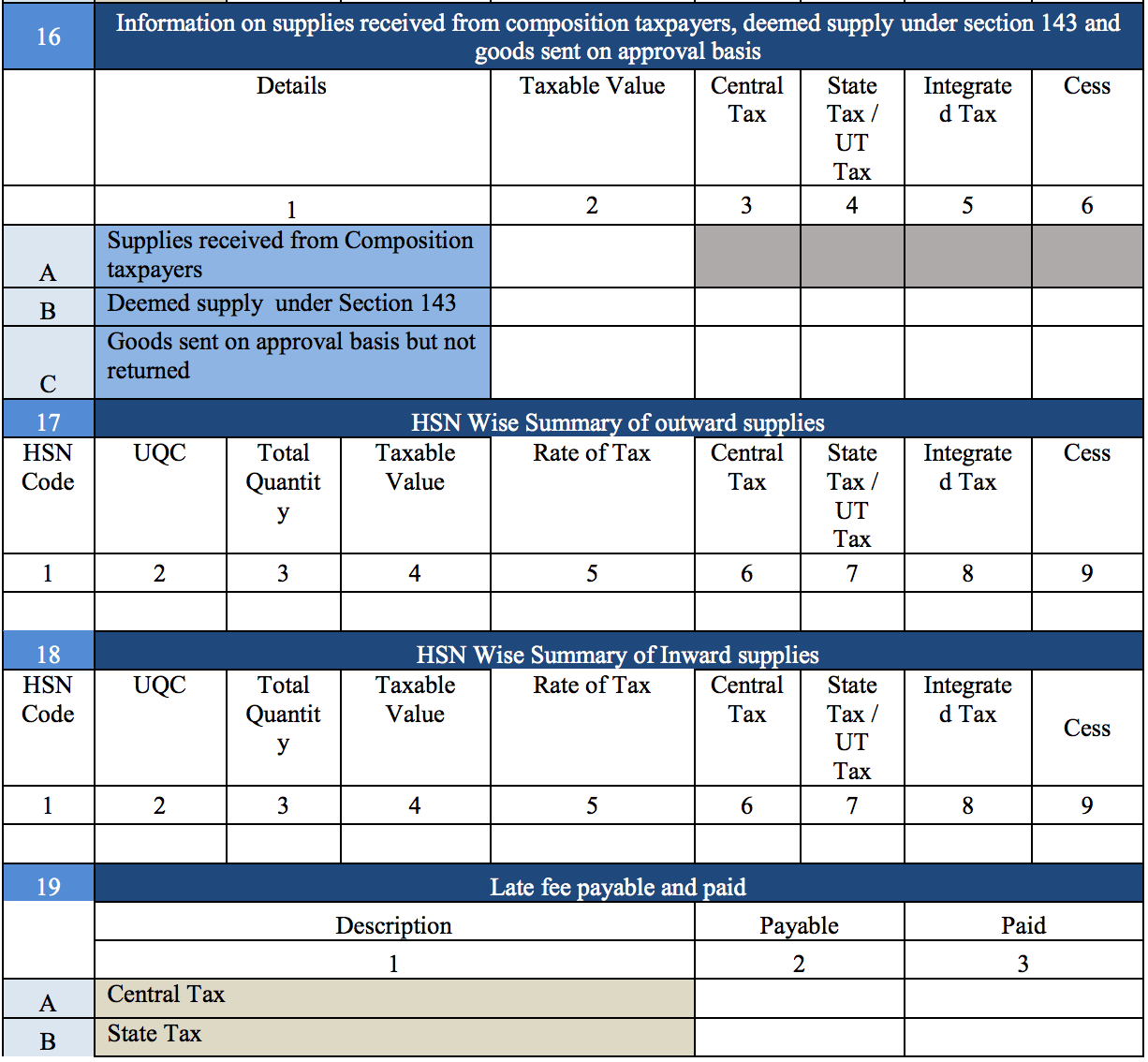 Sections 17 and 18 are for listing the HSN-wise details for both sales and purchase supplies, along with their corresponding tax details and HSN codes.

Section 19 is for details of payable and paid late fees related to central and state taxes.

Last but not least, before filing the GSTR-9 return, you have to sign and authenticate the return either through a digital signature certificate (DSC) or by using an Aadhar-based signature verification mechanism.

When you generate a GSTR-9 summary on the GSTN, the transactions details may differ from what you’ve recorded in your books of accounts. When this happens, you would have to reconcile the information manually, which can be tedious and error prone. With Zoho Books, you can connect to the GSTN and generate a GSTR-9 summary based on the transactions you’ve created, then fetch the GSTR-9 summary from the GSTN and compare them both to see which fields need to be updated. Once you are done, you can push the updated summary to the GSTN and file it. This reduces the amount of time you spend updating your returns.

For detailed instructions on how you can use Zoho Books to file GSTR-9, take a look at our blog and help documentation.

Was this article helpful?       Yes     No
Let us know where we can improve
x
Enter your comments or feedback on this page
Enter your email address

Refresh
Type the characters you see in the image above
By clicking Submit, you agree to our Privacy Policy.
Thank you for your feedback!