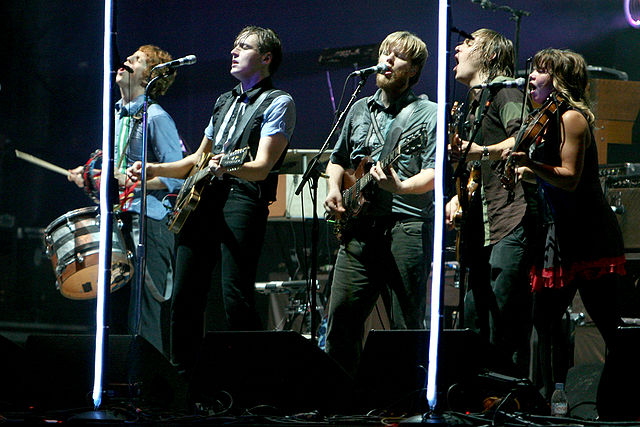 The first time I heard the name Arcade Fire was in February 2011 at the 53rd Grammy Awards. The indie-rock band not only performed, but also shocked a good portion of the country when it brought home the coveted Grammy for Album of the Year.

Many “long-time fans” were quick to tell me and the National Academy of Recording Arts and Sciences we were late to the party, but there were a lot of people who had the same thought — who the heck is Arcade Fire?

No matter the level of “hipsterness” they once had — or still claim to have — the band has gone on to have major success in album sales while selling out shows and tours around the world. However, Arcade Fire recently made headlines for something other than awards or their music.

To promote the release of their new double LP, “Reflektor,” the Arcade Fire street team tagged buildings, taco stands, other businesses and sidewalks around the country with a circular logo. The logos were supposed to be drawn using chalk or water-soluble paint. Unfortunately, not everyone got the message.

Last week, this logo popped up on the wall of a custom picture framing shop here in Austin, Texas. But instead of temporary paint or chalk, the artist at this location used spray paint. A few days later, a plethora of promotional posters with the same logo accompanied the logo on the wall also.

Needless to say, it didn’t go over well at this small business, prompting the husband of one of the store’s employees (Ian Dille) to write a post called, “My Wife Was Vandalized by Arcade Fire.” In the post, he admits that both he and his wife have been fans of Arcade Fire for many years now, but felt betrayed by the band for what he calls an immature marketing scheme.

In reality, Arcade Fire doesn’t need these two fans to stay successful and relevant. The band has almost 1.8 million “likes” on Facebook, close to 448,000 Twitter followers and has sold over a million records worldwide. They could have ignored the problem without feeling much of a backlash. Instead, they took action and addressed the issue.

The band’s lead singer, Win Butler, sent a hand-written letter to Dille, explaining that the markings were supposed to be done in only water-soluble paint or chalk, “to echo Haitian veve drawings.” Butler also took full responsibility for the promotion and also apologized to Dille and his wife.

“I am really sorry that you and your wife had to put up with that,” Butler wrote. “Hope to meet you at a show when we are in Austin.”

Not sure if that was a formal offer of free tickets or backstage passes to a future show, but the letter was a nice gesture from Butler and the band. And whether it was 100 percent genuine or not, it did show that they care about their fans, regardless of how popular they have become.

For example, my roommate recently went to a local Austin burger joint called P. Terry’s. When he got home and reached in the bag, he realized they had forgotten to give him french fries.

So what did he do? He tweeted at them.

What did P. Terry’s do? They tweeted back telling him to send his name and address to their customer service email. A few days later, he had a coupon for a free order of large french fries.

Many companies view criticism or negative feedback as a bad thing and do everything in their power to avoid it. Remember, the most important part of negative feedback is it inspires dialogue between you and the customer. More than ever, customers want to feel a part of a company and feel like their opinions matter and their voice is heard.

Negative feedback isn’t the worst thing in the world. No feedback at all is when you have problem. So like Arcade Fire or even P. Terry’s, look at moments where a customer isn’t pleased or completely satisfied to learn, grow and become better.

How you respond can speak decibels louder than the mistake the first place.