So we were looking at those plain, white squares on the calendar, and it just hit us – there’s so much room there for improvement. Zoho Tasks now syncs with Zoho Calendar.

We all have that one friend who’s always late. Late for movies, turns up for Sunday brunch closer to dessert, sometimes even misses a flight, and worst of all, shows up late for meetings at work. In his TED talk “Inside the Mind of the Master Procrastinator,” Tim Urban explains his theory that the brains of procrastinators actually work differently than the brains of non-procrastinators: the Rational Decision Maker wants to get things done; Instant Gratification Monkey, however, always wants to have fun. And so, the monkey hijacks the ship (ever found yourselves realizing it’s 3:00 AM, after “Lemme play Candy Crush for a few minutes”?), while the Rational Decision Maker stands by and watches helplessly…until Panic Monster awakens. You now know the deadline is so hopelessly close, you can no longer afford to put off your work. 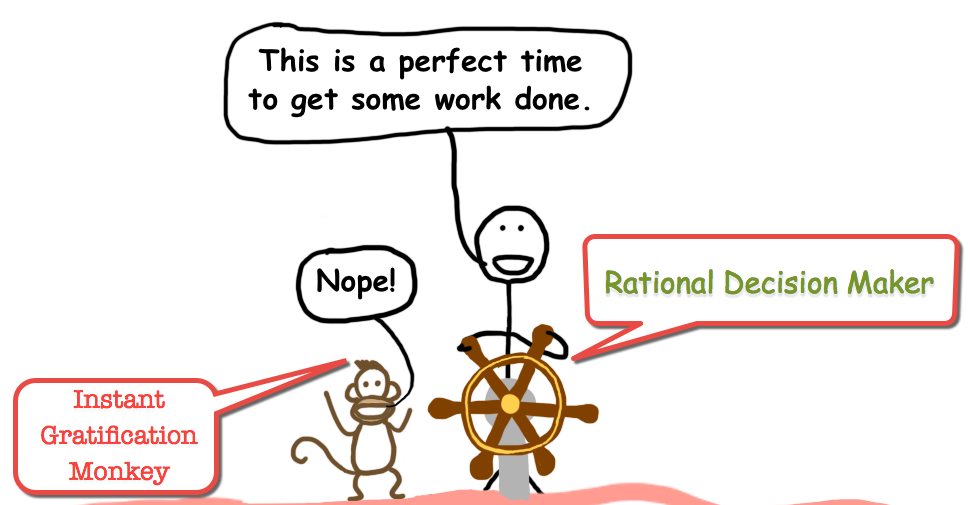 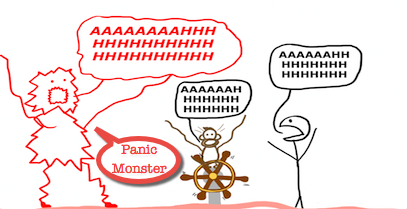 I’ve shared some of Urban’s own graphics because they illustrate his thoughts so perfectly. When last-minute panic eventually sets in, the work we end up producing is far from the best we’re actually capable of. That nagging feeling, “I could’ve done a better job, if only…” Whatever happens next, you can safely attribute it to letting Instant Gratification Monkey run riot. Making us feel like mute spectators to our own lives. It’s about time we took back control, don’t you think?

One time-tested way of motivating yourself to keep at a task is to mark the deadline in red on the calendar. And as the red line draws closer…For some, the pressure (whether self-induced or otherwise) of a deadline helps. For most others, even the most simple of tasks may start to seem impossible to accomplish. At the workplace, even on a single project, there are bound to be so many different people handling smaller tasks, with overlapping timelines and inter-dependencies. A delay in completing one task could snowball into a missed deadline. And that’s not good for business. So how do you ensure that everyone stays on top of the deadline game?

Now it’s easier than ever before. The latest update to the Zoho Mail suite brings with it a new feature that could come in handy for project management for teams in your organization. Zoho Tasks now syncs with Zoho Calendar.

Managing a team or heading a project can get quite overwhelming. We understand. So many people juggling a plethora of tasks, and you get to manage all of them while ensuring everyone finishes their work on time. You log in at work and you check the list of pending tasks, it can seem pretty intimidating . So we thought we’d lend you a hand by breaking down your problem into smaller, workable parts – with Zoho Tasks syncing with Zoho Calendar, those tiny white squares on the Calendar now double up as your project management dashboard.  Here, take a look:

Imagine, as someone managing a team, having a unified view of all the tasks being handled by various team members, as entries directly on the calendar squares, ordered by due dates. Where previously you had to run down a long laundry list of tasks (even when categorized by teams that could get tedious), you now get to see those same tasks neatly compartmentalized, a handful of tasks to a day. Now you’re in control.

Change the Calendar view to ‘Week’ and see which upcoming tasks you need to get updates for, and maybe even create a meeting right then and there. Or see which tasks are due immediately and gently oversee the finishing touches. You can focus on the tasks by the timeline which makes the most practical sense to you. Remember, a herd can only move as fast as the slowest buffalo. So stay in sync and put some distance between you and the red line.

(‘Calvin and Hobbes’ is a creation of Bill Waterson; published by Andrews McMeel Publishing, LLC)

(Characters and images used here belong to Wait But Why, a blog/website created by Tim Urban and Andrew Finn)

Navaneeth just celebrated two years as a Product Marketer at Zoho, and continues to do what he loves most - write creative content. He also counts movies, Manchester United, beer and traveling amongst some of his favorite things. An avid gadget lover, he spends weekends cooking and eating, while also trying to lose weight.

6 Replies to “Turn Your Calendar Into Your Mission Control Dashboard”