Did you know that the Queen of England visited the Iron Throne a few weeks ago (almost sat on it too)? That’s the level of impact the show has made in just four years. Game of Thrones is an epic fantasy series which centers around the battle to capture the Iron Throne, the symbol for ruling over the seven kingdoms of Westeros. It has been universally acclaimed as the best series by fans and entertainment critics alike. Some fans even want the writers to be knighted (including me!). 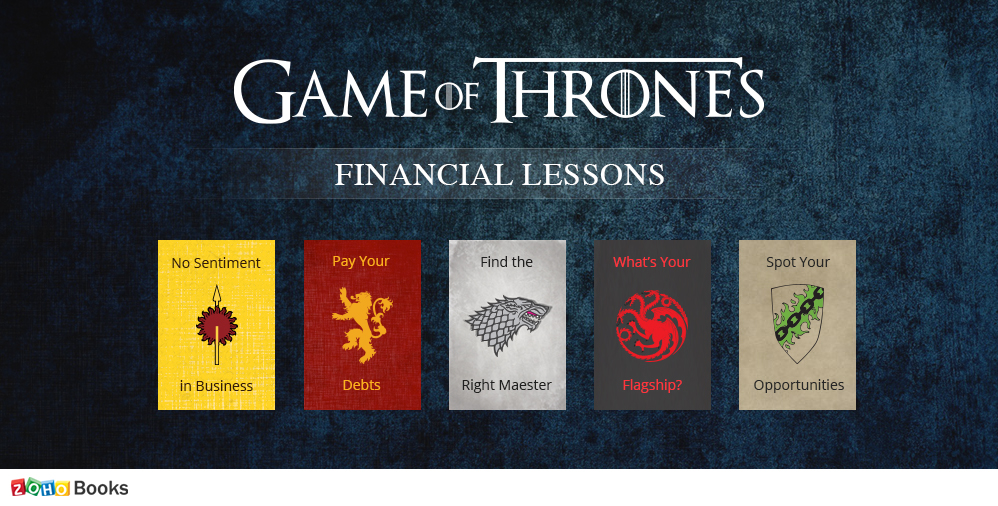 For those of you who have watched the show, there are some crucial finance lessons you can take away, aside from the numerous plot twists and excitement. And those who haven’t watched it yet, have no idea what they are missing. Here are five finance lessons from our favorite TV show (Season 4 spoiler in the 5th point).

1. Find your Maester Accountant. Your business needs one.

“Service as a Maester is a noble calling, one of vital importance to a prosperous realm. It is little wonder there are some who refer to the Order as the Knights of the Mind.”
―Maester Luwin

So who are these Maesters? Every House in Game of Thrones has a Maester who is crucial to the proper running of the castle and the respective family. They handle various tasks for the family they serve, from being a doctor to bookkeeping. They do a good job, with total dedication. There is an episode when Brandon of House Stark falls from a tower and is paralyzed. Everyone is busy tending to his needs. Even in that situation, Maester Luwin urges Catelyn (Bran’s mother) to look at the books to see how much they have spent on the royal visit.

Such is the role of an accountant. While you work on expanding the business, they can take care of your books and also tell you how to use your money wisely. Their financial advice can make a huge difference in your business. Make sure you find the right Maester.

2. Bronn took whatever came his way. Why shouldn’t you?

Bronn is a sellsword who first appears in Season 1, helping Catelyn capture Tyrion Lannister for an alleged attempt on her son’s life. It was a tiny deal from which he probably would have earned a few coins. He still took it up. A few days later, he ends up being Tyrion’s champion in his trial, believing he will earn more for his services from Tyrion than from Catelyn, and finally becomes the captain of Tyrion’s guards. He makes sure not to miss any opportunity to make money.

Always look for opportunities to do business. No matter how small or big they are, the deals might turn out to be bigger than they first appear. So the next time a prospect asks for a quote or an estimate, make sure you take it. You never know, they might end up giving you your biggest deal ever!

3. Daenerys has her dragons. What’s your flagship?

Daenerys is the only daughter and youngest child of King Aerys Targaryen (the Mad King). She was displaced from her home when the Mad King was killed and is now gathering up an army to recapture the throne, to which she is an apparent heir. The Khaleesi has a small army of Dothraki warriors and an army of 8,600 unsullied soldiers. But it is her three dragons on whom she is dependent to reclaim the Iron Throne, just like her forefathers. The dragons scare even the mighty Tywin Lannister.

The subtle lesson here is that no matter how many products your business sells, you should always have a flagship product with which you can churn money faster than the others. Be it a product or service, there should always be a cash cow for your business. Hence, if you have a product that does better than the others, ensure the run never ends. Investing more in your flagship will definitely pay off.

4. The Lannisters always pay their debts. When they don’t, it’s chaos!

Tywin Lannister is arguably the most powerful of the Lannister bloodline, and one of the greatest commanders in all of Westeros. But while the Lannisters like reminding people that they always pay their debts, Tywin doesn’t quite live up to this reputation. Not only has he financed his wars by borrowing heavily from the Iron Bank, his gold mines are also running dry, leaving him heavily in debt. Worse, he has no clear plans to get out of the red and turns to the Tyrells to bail him out.

Apart from highlighting a growing need to nurture more than a single source of income, the events also show the consequences of excessive borrowing without a proper financial structure  in place to repay the loans. It’s an approach that constantly sees businesses file for bankruptcy. Sometimes you need to look for external investment in the form of loans or investments to expand your business, but it’s imperative that you have a well-structured plan in place to pay off these debts as quickly as possible.

5. The best kings rule with their heads and not their hearts. Business is not that different!

Oberyn Martell, or ‘The Red Viper’ was undoubtedly one of the most charming characters of all the four seasons combined, and his death scene left us mind blown too, although not quite the same way. But there is something we can learn from the way Oberyn met his end. Oberyn takes on the Mountain, Gregor Clegane, to whom he is a mismatch in size and power. However, he puts on a show greater than the sum of his parts, partly fueled  by the idea of vengeance. He brings down the Mountain but refrains from delivering the final blow, desperate to see him confess his crime first. The one moment of carelessness when he betrays his emotions, provides the Mountain the opening he wanted.

Just as the Viper is in complete control as long as he is impassive, be ruthless and aggressive when it comes to managing your finances and pursuing the payments you are owed. One careless ‘heart over head’ moment could prove to be the tipping point, one late payment you tolerate may be the start of more. Prioritize your customers based on the right business reasons and nothing more. ‘No sentiment in business’ is the mantra we’re preaching, especially when it comes to setting due dates and making sure you get paid on time. Ensure the business decisions you take are based purely on the actual cards on the table.

You were expecting Tyrion here? He would be our first pick if we were to write about ‘How to be awesome’ lessons from Game of Thrones. We hope the finance lessons we picked out for you were useful. We now want you all to go on and become efficient Master of Coins of your business. Remember, Valar Morghulis. So go on, make money, invest wisely and live life. And also, keep calm and wait for season 5.

Harish is a Marketing Analyst at Zoho. You can start a conversation with him by leaving a comment in any of his blog posts.