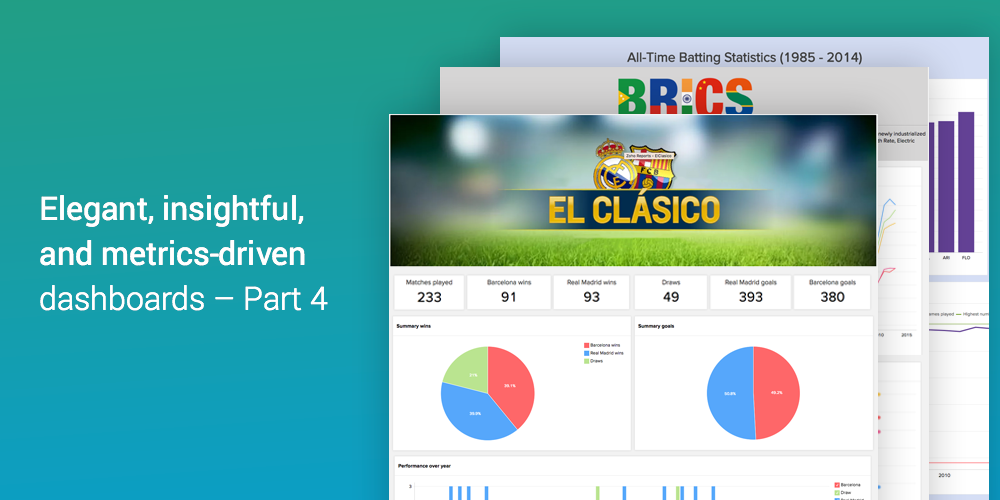 You can check out our previous installments here: (Part 1, Part 2, Part 3)

El Clásico is the name given in football to any match between fierce rivals Real Madrid and FC Barcelona. Real Madrid and Barcelona are the two largest cities in Spain and are sometimes identified with opposing political positions. The rivalry between the two teams is regarded as one of the biggest in the world of sports. Both teams have a large fanbase and we assume this dataset must have been created by one such fan. It contains information on wins, goals, home wins, home draws, UEFA (Union of European Football Associations) wins, UEFA draws, and even followers of each team on Twitter and Facebook.

If you’re an El Clásico fan, we’re sure you won’t want to miss this..

Shown below is a dashboard that displays the above-mentioned information on BRICS (Brazil, Russia, India, China, South Africa) Countries.

Major League Baseball (MLB), as most of us know is a professional sports organization. It’s the oldest of the 4 major professional sports leagues that span Canada and the USA. A total of 30 teams play in the National League (NL) and American League (AL), with 15 teams in each league. The Major League Baseball database contains statistics on batting, pitching, salary, and more, both by the team and by the league.

The Crime Stats database contains information on criminal activities such as assault, burglary, rape, motorcycle theft, kidnapping, robbery, sexual offenses against children, and total sexual violence across the world. Information on each type of crime is compiled into individual dashboards.

Shown below is the dashboard on Robbery:

Click here to view the dashboards for global crime statistics.

You can use this link to access all the public dashboards our customers have shared. We encourage you to create and share such dashboards as well.

Want to learn more about Zoho Analytics? Register for our Webinar