What is change management?

Change management is a discipline that guides organizational improvement. It results in a permanent change as a result of observable shifts in behavior. It ensures that your organization learns and improves in a thorough, orderly and sustainable manner. Successful improvement projects require that individuals and groups are aligned, that they share a common vision, that they know how they will define success, and have a path to achieve it.

In this article, we’ll focus on tools that will help move your company toward its desired state no matter what its goals. Major barriers to effective change are largely cultural. We will present change management best practices that address these cultural challenges.

We will show how companies can: 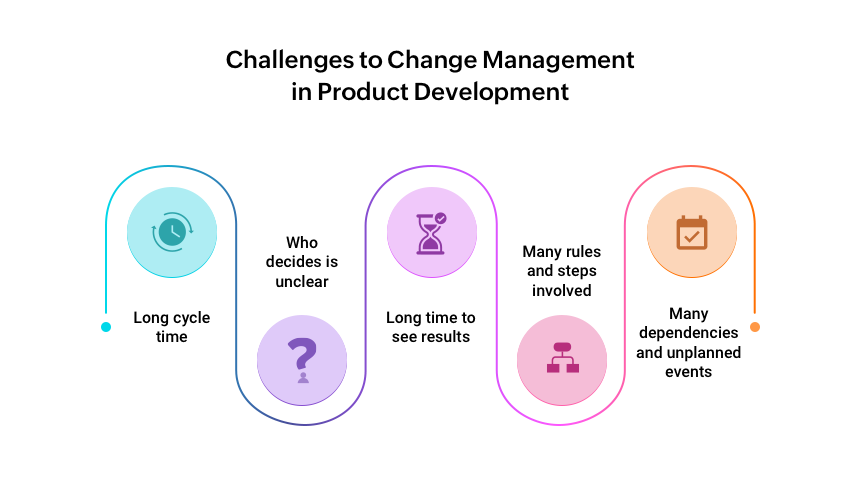 Why is Change Management in Product Development Difficult?

No matter what your goals, change management for product development is especially difficult. Smaller, nimble companies may be able to deliver results relatively quickly. But more sophisticated firms tend to have more layers of hierarchy and more politics involved in product development and hence greater resistance to organizational change This resistance is often called “the frozen middle”.

The long cycle times involved in many product development projects also make organizational change in this domain difficult. Often, the results take months or even years to materialize. Sustaining an initiative through a long cycle is more difficult than the quick wins a company can make by such strategies as reducing inventory. For example, retooling and piloting a product development process, and then making it the standard approach across all teams, can take years.

Product development change initiatives are also hard to measure. Incremental measures made along the way are often unreliable. Too many companies do not measure the numbers that really matter. They wait until the end of the process and then measure the result — when it’s already too late to change it. The best approach is to measure the behaviors that drive change. These are the metrics that can predict success.

Product development also involves many functions working together. Software, Marketing, and Finance, for example, speak different languages. Each function may protect its own concerns and interests. Organizational change management in product development often entails complex dependencies between these functions. Tinkering with one function often has unintended consequences for another.

Many companies have good ideas about how to improve, but embedding these changes within the culture is the greater challenge. The politics of the organization and the sensitivities involved tend to block the transformation. How can companies clear these cultural hurdles?

A key to embedding cultural change throughout an organization is to start with a small number of initiatives. Too many companies try to take too big of a bite out of the apple. They overwhelm the company with too much organizational change, all at once. Begin with smaller, more feasible changes and build on them.

Take each of your goals and drill down into them. For each goal ask, “What are the levers that would drive us toward this goal?” These levers are usually small in number. It can also help to ask the question negatively: “What is preventing this change from happening?” Then drill down deeper to create metrics that drive the behaviors that influence these key drivers.

For example, a Tech firm had developed a superior new product development process but had little luck in getting teams to follow it. What behavior would indicate that teams were using the process? To track compliance, change agents measured whether the new process’ milestone names were in a given team’s development plan. If this metric increased, then it’s likely that compliance with the new process would too. Using the new names signalled adoption of the new process. 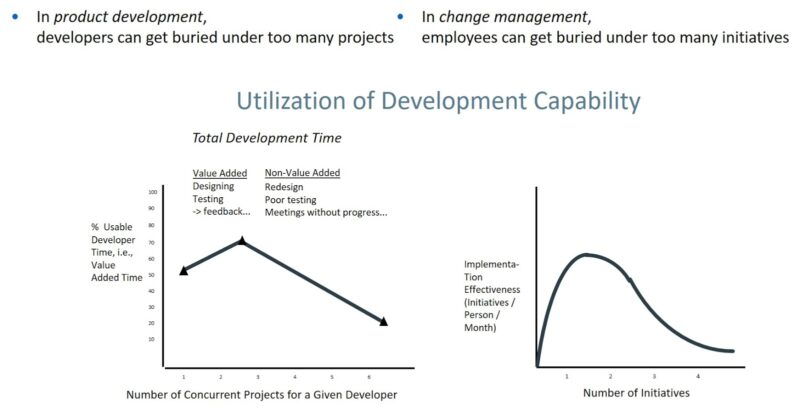 This company’s approach was to measure the behaviors that drive change. This is a best practice for creating predictable change. We recommend that companies have no more than three to five such predictive metrics for each change initiative.

This is an inch-wide, mile-deep approach to change management that works as follows:

Preparing the Organization for Change

Change is scary. And when people are scared they engage in freeze, flee or fight responses. Either they become part of the frozen middle, or they avoid the changes as much as possible, or they resist change because they simply don’t know their role in the change process. Overcoming these instinctive responses is half the battle.

The best way for managers to head off these responses is by preparing people for change. People want to know how the proposed change will affect their stakeholder groups, technologies, processes or roles. A tool called the Change Impact Matrix can help. This tool outlines the scope of the changes that everyone involved in a project will face. It helps to surface and assuage the fears that come with change initiatives by turning the unknown into a known.

The program manager creates the Change Impact Matrix with the key core team members in the room. Schedule a meeting of approximately 90 minutes to create the matrix with the team.

If you have even one or two roles or functions that are rated as Medium or High, assign change agents to these roles or functions to manage training and communications around the proposed change. These functions or roles will require capable leaders and detailed work plans.

One common response to change initiatives is to resist them entirely. Some managers and contributors will try to use political influence to block the proposed changes at all costs. A tool called the Attitude Influence Diagram can help.

This tool is an X/Y plot that rates likely blockers according to their political influence in the organization and the degree of potential negativity they represent. The X-axis indicates how much they support your project (attitude), and the Y-axis indicates their level of influence. Place such individuals on the chart as bubbles, with their name and title inside each bubble.

Determine the influence of identified blockers by a combination of their position in the organization or their degree of seniority, their knowledge, or persuasive power. Consider  not only senior leaders but also individuals at lower levels of the organization who may wield influence. There are often people who do not have lofty titles but whose opinion is influential. A larger bubble means that it will be more difficult for you to influence them.

In rating the attitude of potential blockers, start by identifying the most negative and most positive persons. Then you can make comparisons against these two extremes.

By looking at the quadrant of high influence and negative attitude, you can focus your persuasive efforts on individuals who are most likely to impede your success. Create a strategy to approach the individuals in this quadrant to work through their concerns. Such efforts may include:

This is obviously a highly subjective exercise and not one to be shared beyond your immediate circle. This is an exercise that is highly sensitive and should be performed with only a small number of participants. Nonetheless, thinking through who is likely to fight the proposed change — rather than freeze or flee — helps to manage change effectively. 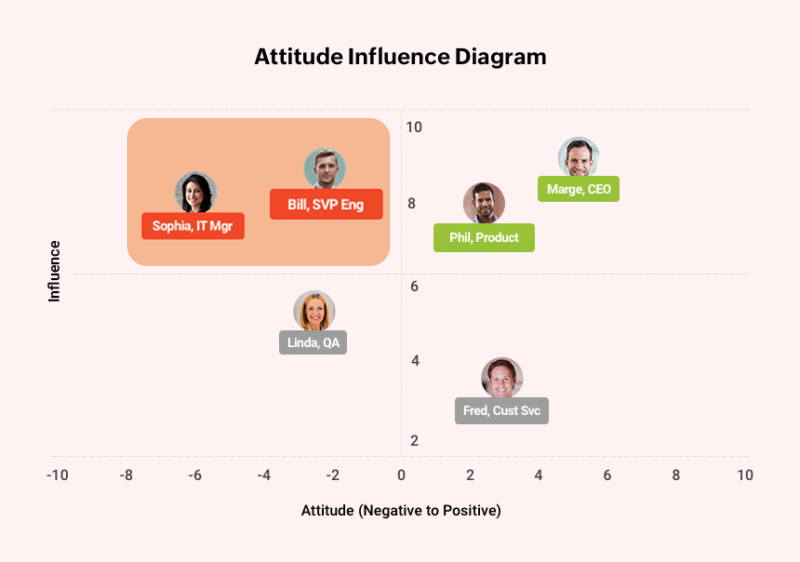 Change Management for product development depends a great deal on the scope of the change required, the type and size of the company, and many variable factors. What varies less is human nature. This is why culture is a key to change management.

Effective change management means embedding improvement in the company’s culture. That means having defined goals, and then creating targeted plans for realizing them. Drill deep down into the goals you are trying to achieve and unearth both the supports and barriers to realizing them. Drill deeper to discover the key levers that drive organizational change, and measure these behaviors.

Cultural change is easier when you manage expectations. Therefore, prepare the people in your organization by thinking through with them how the change initiative will affect their jobs, their familiar processes, and their technologies.

Finally, identify who is likely to be the most resistant to change. Often these blockers can become your biggest advocates and change agents. Don’t flee from negativity. Find a way to acknowledge and mitigate it. You can’t manage a culture, but you can influence it. Slowly, one step at a time, your change initiative will produce the positive results your organization needs to sustain its success.

John Carter is a widely respected expert on product development. He is the co-inventor of Bose’s Noise Cancelling Headphones and designer of Apple’s New Product Process. As Founder of TCGen Inc., he has consulted for Abbott, Amazon, Apple, Cisco, HP, IBM, Mozilla, Roche, and 3M. He is the author of “Innovate Products Faster,” featuring more than 40 tools for accelerating product development speed and innovation. John has an MS in Engineering from MIT.