Maslow's hierarchy of needs is a motivational theory in psychology outlining a five-tier model of human needs as hierarchical levels within a pyramid. Maslow posited that human needs are hierarchical and that his pyramid lists the needs from most basic to the least basic. So, according to Maslow, one would start at the bottom and only when one's needs at that level are satisfied would one think about the next higher level. 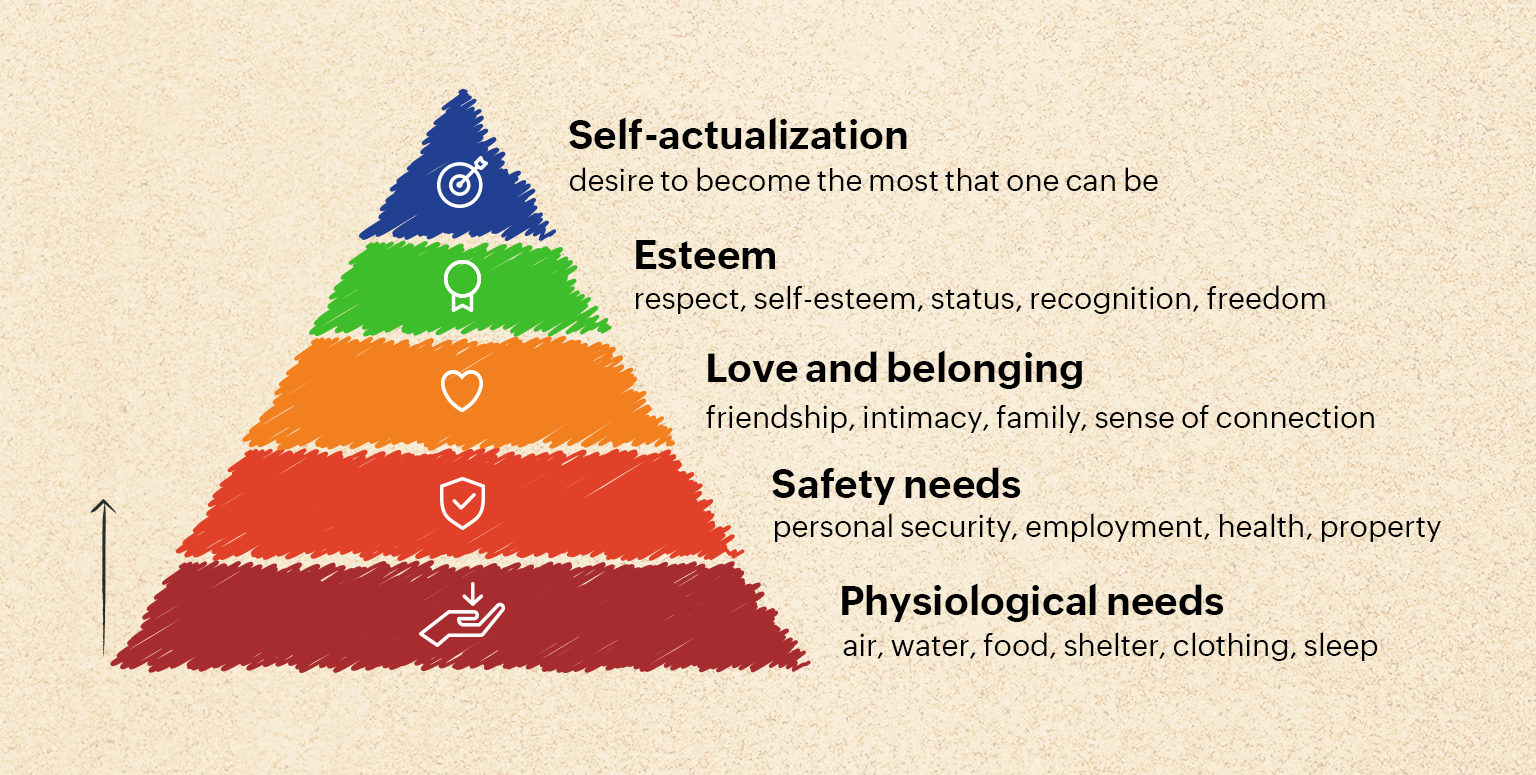 Since the theory of Maslow's hierarchy of needs was first published in 1943, there have been a good deal of criticisms about the lack of diversity in his test subjects. Maslow's failure to include a sufficient amount of women and the effects of socioeconomic and cultural disparities have resulted in several studies falsifying his findings. For example, even people in abject poverty or war-torn regions feel the need for personal connections despite not satisfying the first two levels of the pyramid.

We decided to take a leaf out of Maslow's book and create a hierarchy of needs for product management. Despite its flaws, the pyramid of needs does make for a memorable guide to basic human needs. And cracking the code to product management can't be nearly as complicated as decoding all of human nature, can it? 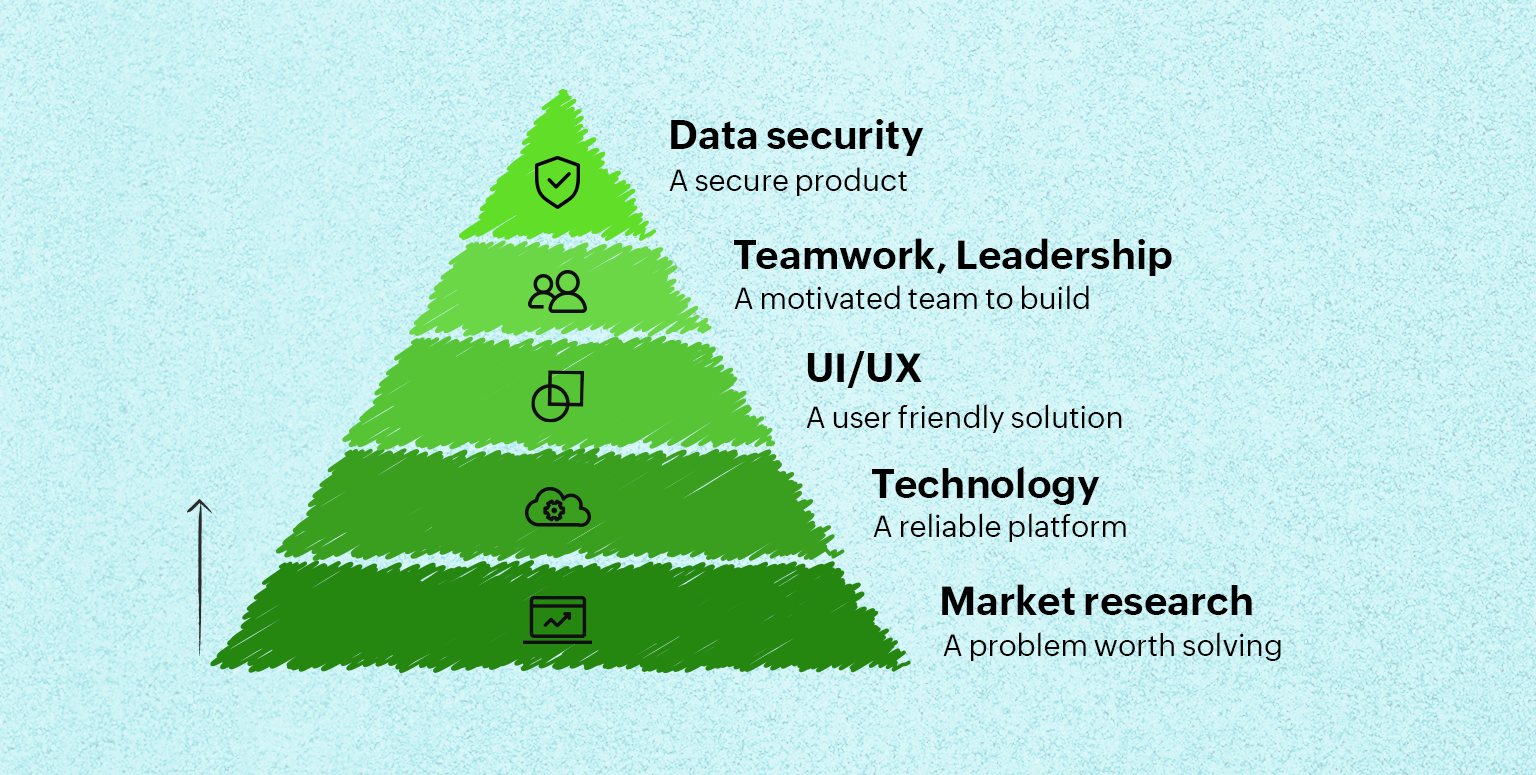 Tier 1: A problem worth solving

"Without data, you're just another person with an opinion" - W. Edwards Deming

The most basic need in product management isn't as obvious as people like to think it is. 90% of businesses fail and a key reason is improper market research. This morbid statistic can speak of many horror stories in the product world. Dinnr, a food and beverage company founded in 2012, allowed customers to choose a recipe from their website and delivered pre-measured ingredients along with instructions on the same day. Though it sounds like a fun idea, it was shut down in 2014 due to a lack of demand.

Hailo, a cab hailing mobile app, was launched in 2013. With $100M in funding and a successful stint at London, it was launched in New York to target the yellow-cab market. They quickly came to realize that New York drivers aren't as smartphone-savvy as London drivers, because unlike London, you didn't need maps to get around New York. Even as they were struggling with adoption, Uber offered better rides with UberX at lower costs. The biggest lesson from Hailo: Know your market and know it intimately well.

Market research needs to be thorough, unbiased and data-driven. It's easy to look around and find that all successful companies have clearly defined problems that they're solving with their products. 'Market research' is a blanket term used to refer to validating product market fit, ensuring viability, competitor analysis, research using focus groups, and nailing down market segmentation and product differentiation.

If you're tempted to think about the NoPhone Original (which is just a plastic case with nothing in it) or Pet Rocks (yes you guessed right, it's a rock), you're not alone. Both of them were profitable, but they were outliers and they were positioned to be so. You'll notice they don't have competitors lining up nor do they make the list when one's thinking of successful startups.

Launching a product always comes with its risks. The first tier covers all the activities that help you minimize uncertainty by checking all the variables under your control.

Once you've conquered Tier 1, the next step is to execute your idea. Choosing the right technology and ensuring proper security are two crucial items on any Saas product's bucket list. In the world of apps, your monetization strategy and target demographic could decide whether you want to build your app for iOS or the Android platform.

Buggy software could annoy your users and tank your adoption. As your company grows, the stakes only go higher. In 2017, a French man used his wife's phone to book an Uber ride and then logged out. Courtesy of a small bug, updates on his rides continued to be sent to her phone, from which she gathered that he was having an affair. As funny-tragic as the story is, the french man ended up suing Uber for €45 million! Who's laughing now?

Software bugs have aided bank heists and misled fighter planes. Small bugs could have big consequences. People use products that they can rely on. Your industry could dictate the bug-tolerance levels for your product, but it's fair to assume people don't like faulty software, whether it costs them a spreadsheet or a rescue mission.

One of Google's core values is "Focus on the user and all else will follow," and it's not for naught. Google's relentless focus on user experience is easily one of the reasons the tech giant influences the very fabric of culture and society in the 21st century. In addition to offering a unique solution with its proprietary algorithms, Google has quickly become a staple in our lives by obsessively making things user-friendly and accessible. An alarmingly absolutist player, but nevertheless inarguably indispensable.

"Good design is good business" claimed a wise man called T.J. Watson. Jr in a 1966 memo to all of IBM, and it still rings true. Starting a business has never been easier. With an influx of funding and entrepreneurial grants, the biggest challenge is to hold your own against a flood of your competitors in the market. With increasing expectations and decreasing attention spans, user experience is becoming a key differentiator among competing products. It sits on the third tier of our pyramid because even if you have a brilliant idea, nail the product market fit and execute it with flawless code, you can lose out your market share to a competitor who offers an easier solution.

In 1982 when Steven Spielberg's E.T. released, Atari bought the franchise rights for $21 million and released a game with the same name (with only 5 weeks of development) in order to ride the hype wave. The movie was a hit, Atari made 4 million copies of the game and spent $5 million on promoting the game. It seemed like a sure thing—until it wasn't. The game was incredibly difficult to play and sales dropped very quickly. They managed to sell 1.5 million copies and Atari had to bury the rest in a landfill. They had to bury the idea, literally.

Tier 4: A motivated team to build

People are the biggest assets in any business. A good leader can build a great team, own the product vision, and rally the team around a common goal. Every person on a product team adds value, and a leader ensures that they know it. Leadership at a product company comes with a lot of responsibilities. In an almost saturated market, companies need to innovate constantly and consistently study their markets to stay relevant in the game. In a position of power, a leader can single-handedly influence the strategy of a product. Alternatively, they can hire the right person to do it. Leaders have been known to save sinking ships and also sabotage perfectly good ones.

Rdio, a name forgotten by most, stakes a claim as the first music streaming app. It was created by Skype founders Janus Friis and Niklas Zennström in 2010. Like most parents, they obsessively focused on their brain child and dropped the ball on marketing and distribution. Rdio launched album recommendations based on listening history in 2013—before it was cool!. A music streaming service's success banks on a large user base, and from Spotify's viral marketing campaigns, it's easy to understand how the right marketing could have helped.

"If you want to keep a secret, you must also hide it from yourself"

As the memes and posts point out so very clearly, you are the product. With data breaches and investigation exposés, people are suddenly being confronted with the sheer amount of data they've pledged to tech companies in return for their services.  Your phone can send you restaurant suggestions for a vacation that you're only starting to plan, or your retail store can tell if you're pregnant before you take the test yourself! With increasing awareness about information privacy, people are demanding more transparency and are willing to pay for it. What consumer data is collected, how it's being protected, and the scope of potential applications of usage data are becoming key points of debate in the tech world.

A lapse in security could take a bite out of your revenue and brand image at best, or put you completely out of business at worst. Big brands like Facebook, Twitter, and LinkedIn have suffered from data breaches and survived to tell the tale. If you ask around in your friends' circle, you'll find that some are more data-aware than others, and they choose their products more carefully. However, all of them would put down Tiers 1, 2, and 3 as must-haves, which is why our last tier is perched right at the top.

In a post-GDPR world, data privacy is slowly but surely on its way to becoming the next biggest differentiator.

A recipe for success

There isn't one! Each product journey is unique and comes with a fresh set of challenges. There are many reasons a product could fail: bad leadership, bad design, security lapse, bad timing, it could have gone obsolete, not enough market demand, lack of focus, lack of funds, didn't pivot at the right time, or it could be crushed by competitors. A product could have also succeeded with what now seems like sheer luck. When seen with the benefit of hindsight, many of the mistakes may seem obvious, when they might not have been so at that time. However, that doesn't mean we can't learn from these case studies.

Tackling a product journey is like fighting a three-headed hydra: you have to keep track of multiple things simultaneously. And if you cut off a head, three more grow in its place! (Okay, that part might not always apply to product journeys, though many entrepreneurs could probably tell a story or two about monster-slaying!)

Building a product is one hell of a journey but it's worth it!