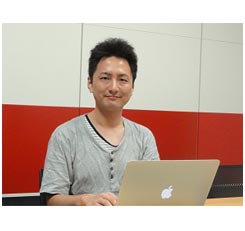 is a talented entrepreneur who wears multiple hats at work! He is the engineering mind behind all the projects and the accounting whiz who efficiently manages the cashflow. Our Japanese colleagues had the opportunity to meet Mr Iwasaki a little while ago. Read ahead to find out more about his talented approach to work.

When did you start searching for an Invoicing Tool?

I have been a freelancer for the past five years now. Since then, based on the customer, I have created estimate, invoices and task report. I wanted to manage these on the web but couldn't find any service which provided Japanese formats. The existing ones used Excel Macro. In the beginining, I used it for my invoicing needs.

So, you continued your search for web based solution while you were using Excel ?

Yes, I continued my search. The online tools available were different from Excel.The number format was of a foreign style and there was no tool having the Japanese style.

Even Zoho Invoice had the same issue. It used to show the decimal point when I created the invoices (decimal point is not used in Japanese format). The usage of decimal point after the amount can lead to customer's misunderstanding the amount

"This kind of data is supposed to be relational database and I was forced to manage it by Excel which was not efficient"- Mr. Iwasaki

The main problem with Excel is that, Excel Macro worked only on Windows. I'm doing development work on Mac. For my invoicing needs, I had to keep a separate windows machine and keep switching to it by using VMware . Even now, if I require any invoice/estimate to be sent in the old style, I have to follow the above steps.

Why did you stop using Excel ?

Firstly, the number of customers has increased. In Excel macro, estimate and invoices were created as individual files and it was becoming difficult for me to manage customers. This kind of data is supposed to be relational database and I was forced to manage it by Excel, which was not efficient.

What was your first impression of Zoho Invoice ?

I felt Zoho Invoice can solve my problems. Initially I was not able to use it because of the currency format issue. But I learned that the settings can be modified and the decimal point can be hidden. I have been using Zoho Invoice since 2009.

Did you compare any other service with Zoho Invoice?

At that time, there was no other web based service available. There were some, but those were package products like Yayoi (Yayoi is the most popular booking software for SMB's in Japan). I have outsourced my bookkeeping work to a specialist and the person suggested that Yayoi was popular when it comes to having features like item/service and estimate/invoice management at one place. I even considered Salesforce but it's combined with CRM and too expensive for my use.

How many invoices do you create per month?

Mostly 3-5 per month. My kind of work doesn't involve frequent invoicing to customers. I don't need to invoice after the agreement is set. My work with the client takes about 6 months to 1 year. So, when the project work changes I use Zoho Invoice.

What kind of work do you do for that period?

My company does the development for web applications using Ruby on Rails. Work is normally project based and usually takes about 6 months to 1 year. If the project is long then it may take years to finish. I do everything, right from consulting to system development to maintenance. I'm an engineer who creates invoice and such a person is probably rare.

Is there someone who manages accounting?

It's a single person company and I run it solely. I outsource the accounting and labor management.

Where do you usually work?

Mostly at home. The next most common place you'd find me working is the train. I get a lot of work done while commuting between my customer's place in Tokyo and my home.

Have you ever created invoice in the train ?

Yes, I have created invoices in the train. But it's tough to use on lines with many tunnels as the radiowave seems to be weak.

What's the best thing you like about Zoho Invoice?

The best thing is that I get to know if a payment has been made or not by just looking at the 'dashboard'. It might sound like a joke, but while talking to other freelancers and presidents of small companies like mine, I found that there have been instances when they have forgotten to send invoices more than once! With Zoho Invoice, I'm aware if I have sent an invoice or not and I appreciate it.

Do you check your pending payments by dashboard?

Yes, the total sales and the balance is shown on the right hand side, isn't it?. I check the dashboard at least once a month.

Is there any improvement in terms of operational efficiency ?

Yes, there is. Earlier, it took me a lot of time to manage the customer data using Excel Macro. I had to edit the excel file, close the application once to run the macro, then create the PDF. For an invoice, it took me 5-6 minutes. Sometimes even upto 10 minutes as I did it on virtual machine.

How much time do you spend now ?

Now, if it's recurring, I just have to click a few times and export it. It takes me 2-3 minutes.