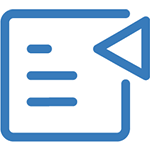 It always comes as a surprise when people try using your product in ways you didn’t expect them to. Though we had intended Zoho Writer to be used on desktops and laptops, that too on IE/Firefox/Mozilla browsers, we get interesting user feedback. Sample these :

This one’s from Warren T of Houston, Texas:

Let me give you some background. I recently purchased an MSNTV2 internet appliance for a friend who is going to have surgery soon, and will be out of action for some time. Read: Not able to sit upright at a computer. Anyway, I was thrilled to find your software and had planned to have her use it to edit our CBT scripts from her propped up position in bed. (We all work in multimedia CBT production).

When I signed up for the account, I did it from a desktop PC. Later, I signed on to Zoho from the MSNTV2 device and all was well. I started a new document and was typing along. Then, I hit a return (enter) key. That triggered a keyboard sequence signal that immediately shut down the MSNTV2 device and caused it to reboot. Tried it many times. Same thing.

Don’t get too upset. I’m absolutely certain the problem is with the MSNTV2 device, and not your software. I am merely providing this feedback in the event you encounter this issue from other MSNTV2 users. Too bad that it wouldn’t work. MSNTV2 offers something they call a word processor. Ha ha ha ha. Unfortunately, you can’t save the document you create. It’s weird. You have to sign on to an HTML page and enter your text between the and commands on the screen. Your only choice from there is to print it.

Your product is a natural for people that use internet appliances. I hope that Microsoft’s MSNTV people will fix the problems the unit has with certain protocols or someone will come up with a fix. I have some ideas of my own but no time to work on them.

One final piece of feedback. I Googled and found Writely. I setup an account with them and their device fails on the MSNTV2 before you ever get to the part where you create a document.

Moving away from MSNTV… (phew!) In terms of a software being a good idea, I think you-all are really on to something useful and that has loads of potential. I have already shared with my regular desktop users at work the ways which we could use it.

I was checking out a certain internet tablet and was wondering about the ability to write, share, and collaborate on documents using such a device. I imagine being in a conference, or meeting, and having a small tablet in which I have my own notes and share with others.

Zoho Writer at first seems to work well within the embedded Opera browser, but doesnâ€™t actually let you view or edit any of your documents. The interface is there, but no one is home. I assume Opera isnâ€™t handling some of the Javascript calls for displaying available docs or the editing toolbar. Also, Zoho even on a desktop has the annoyance of not automatically saving. Therefore, you can be halfway through a new document, click a document from your library on the right, and the doc you were working on is gone. Yay, loss data – Iâ€™m always a fan of that.Update: the developer of Zoho is aware of the issues regarding Opera/Safari & the possible loss of data when changing documents (there is apparently a 45 second auto-save of documents) and they are working on updates.

So, the result? Online, collaborative, sharing document editors are quickly rising, and there are no extreme barriers to entry on the bandwidth or technology front. Now comes the hard part, developing good, consistent User Interfaces, stability, and hopefully a little love from the community.