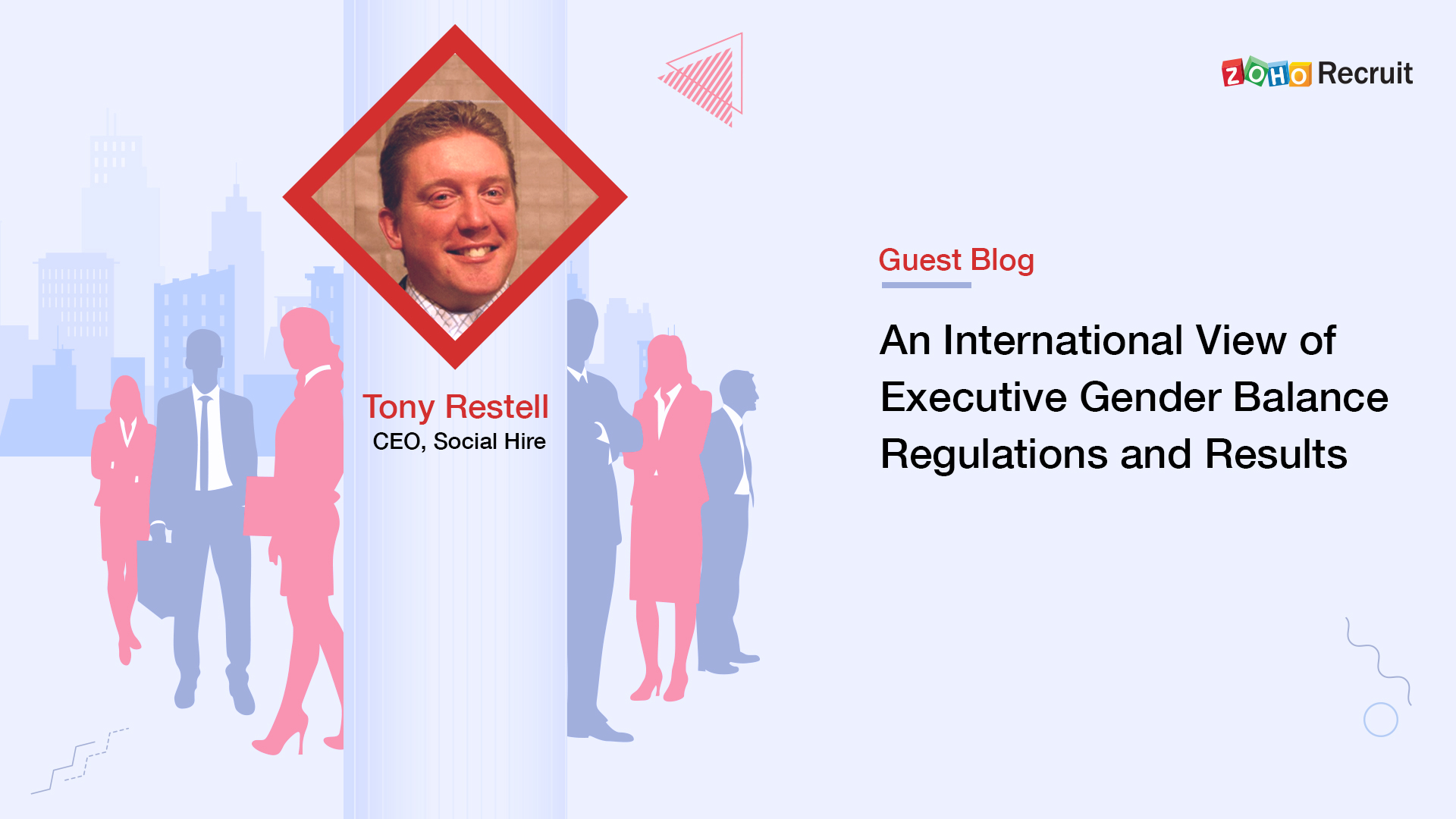 Tony Restell is the founder of Social Hire, the fastest-growing agency that helps candidates and recruiters leverage social media to reach out and recruit top talent. With the industry experience of over 20 years, Tony has been helping small businesses and recruitment teams build their social media presence. He is very passionate about recruitment marketing.

The significant gender disparity in C-suite and senior management roles, some of the most visible positions in companies, has long been a matter of concern. A report from DiscoveryOrg in a survey of C-level roles at Fortune 1000 companies in 2016 revealed that just 15% of senior management were women, while only 10% of top senior-level positions were made up of women. However, a 2019 gender diversity benchmark study revealed significant changes in the gender mix in c-suite roles. For instance, in 2016 just 7% of CEOs in F1000 companies were women, whereas the new study shows that female representation in CEO roles is now up to 13% in these corporations.

Overall, there was a 44% change as female representation in C-suite rose from 18% to 26% within that three-year period. While these figures may infer that women have gained ground in achieving gender parity in boardrooms, gender equality is still far off and there remains a lot to be done. Gender parity may not be so easily achieved without regulations that specifically seek to reduce this difference in gender mix within companies. With that said, in this article, we are going to consider different countries/regions and the results of policies they have in place to tackle gender disparity in the c-suite.

When it comes to female representation in C-suite roles, France sets the standard with its gender equality policies; of particular note is the implementation of the Copé-Zimmermann law, which originally set a quota of 40% of women on boards in public companies that are listed on the CAC 40 with 500 employees and a turnover of over 50 million Euros. This law has continued to evolve, and as of January 2020, companies of 250 employees or more must have at least 40% women on their boards of directors or supervisory roles.

Beyond increasing female representation in board rooms to 43.6%, France also has structures in place to address the significant professional gender pay inequality, gender discrimination in recruitment and other forms of inequality female staff may be subjected to in the workplace, including sexual and gender-based violence.

These new laws were published with detailed indicators to be used to measure pay gaps between women and men and a reporting obligation for companies with at least 50 employees. The policies also have a financial penalty imposed by the labour authorities in the country to be meted out on employers who fail to comply. Since they were implemented, these measures have done well to encourage more female representation in the C-suite and promote gender equality across companies in France, with a notable jump following the implementation of the Copé-Zimmermann law; women occupied only 8.5% of directors’ seats in 2007, compared to 38% in 2016, five years after the law was passed.

Nordic countries have also made significant strides in bridging the gender pay gap, and were the first country to impose regulations. As a matter of fact, data from the World Economic Forum Global Gender Gap Report 2018 showed that four Nordic countries – Iceland, Norway, Sweden and Finland (in that order) took the top 4 spots out of 144 countries in the global ranking for the world’s most gender equal society, with more than 80% of the gap closed in each country.

From progressive parental leave and childcare policies which oblige parents to take several weeks of paid employment leave following the birth or adoption of a child, to a strong political female empowerment movement that has seen women rise to positions of power in both government and corporations; as well as a gender quota law which mandates firms in the region to raise the proportion of women on their boards to 40 percent or face the drastic consequence of being shut down, Nordic countries have initiatives that not only tackle the issue of gender balance in boardrooms but have widely contributed to closing the gender gap.

While the United States may be one of the most progressive and developed nations in the world, it sadly lags when it comes to gender diversity in senior level management. Statistics show that while women constitute nearly half of the workforce (49.6%), their representation in top positions of power is low. From medicine to law to academia, politics and even in Hollywood, women aren’t moving up into positions of power and prominence in the USA at the rate their male counterparts are.

While the rest of America may not be doing much to promote female leadership in the boardroom, California has taken unprecedented strides to do so. In September 2018, the Governor of the state signed into law a controversial bill that requires gender diversity on corporate boards of publicly traded companies headquartered in California. This gender quota law has seen hundreds of Californian companies make changes to their boards to include a representative number of women to avoid a noncompliance fine of $100,000 to $300,000 for every subsequent year of noncompliance. While equal representation of women in the C-suite in the state is still elusive, the policy has been effective in reducing the gender gap and giving more women access to corporate boardrooms.

Another state doing their bit for gender balance is Illinois. Taking the first step in following California’s lead, public companies with headquarters in Illinois now have to file public disclosures about the racial, ethnic and gender diversity of their boards of directors.

Although Canada is one of the leading countries in the world when it comes to female inclusion and empowerment, this is unfortunately not the case in corporate boardrooms. As at 2016, only 20% of board directorships in the country were held by women. While there is an awareness about the lack of female representation in leadership roles, not a lot is being done to implement policies that will promote gender parity in boardrooms. In all, it will take a while before women no longer lag behind men in regard to their representation in senior management roles in companies across Canada

According to a 2018 report released by Cranfield University as part of its 20th FTSE Women on Boards Report, the number of women in top senior positions in the biggest companies in Britain has dropped. The analysis revealed that female representation in full time executive roles across boardrooms in FTSE 250 firms went from 38 in 2017 to 30 a year later. The situation isn’t much better for FTSE 100 firms as only 9.7% of the executive directors are women. While there are no policies with mandated gender quotas in place yet to promote the female executive pipeline, efforts have been made to advance efforts such as the government backed Alexander Hampton review of 2020, calling for FTSE 100 companies to have at least 33% women on boards.

Another country that is getting it right in the issue of promoting gender diversity in C-suite is Switzerland. In 2019, Swiss lawmakers in the upper house of parliament voted in favour of a bill to increase the number of women in management of large companies listed in Switzerland. The new policy will require 30% of female representation on corporate boards and 20% representation on executive committees. To ensure compliance, a violation of this law mandates companies to present an explanation for the shortfall in their annual compensation report and a plan for improvement. This law will enable more women climb to top positions in Swiss companies as they make greater efforts to hire and promote women.

While a considerable number of women hold senior management positions in companies across the Asian continent, not a lot these women would be found in their corporate boardrooms. Women hold only 9.3% of board seats as of 2019. However, despite the low figures, progress is being made in promoting gender diversity across companies in Asia, as this indicates a 1.5% increase from 2016. Nonetheless, the continent is still very much behind the trend of 16.9% women in board seats worldwide. While Asia might be making progress in improving gender diversity across businesses, it is still trailing, and it will be a while before there is any major progress for women at the c-level.

India’s law mandates quotas for women on the board of directors of listed companies. However, this law hasn’t done much to achieve its desired objective of gender equality in corporate boardrooms. This failure can be mainly attributed to tokenism which is practiced by about 12% of all listed companies in India. The policy doesn’t also enforce hiring and retaining women at higher levels of the corporate structure which results in a lack of top-level women managers. Moreover, the one-woman quota means most companies reserve only one seat for women, and a lone woman director may not be able to make substantial contributions in a boardroom dominated by men. As a result, India still ranks in the bottom ten countries in the world, with women holding only 17% of the top management positions in companies.

In most countries around the world, excluding France, Belgium, New Zealand, Sweden, Norway, Iceland and Finland, women constitute a minority on the board of directors on account of many patriarchal stereotypes. According to Agnès Touraine, President of the IFA, “The most significant progress has taken place in the countries in which quotas have been adopted”, and a number of other initiatives have been positive in promoting parity in boardrooms, but there is still a long way to go to achieve gender equality in C-suite.

There is strength that comes from having the best of both male and female representatives. This diversity enhances debates and provides insightful and varied opinions on topics that matter to businesses. Yet women are still largely under-represented on corporate boards and progress to change this trend continues to be slow. However, you can help close this gender gap in your own way by hiring and promoting more women.

Tony Restell, Founder of Social-Hire.com, worked with the team at Female Executive Search to produce this roundup of regulations and trends. If you are looking for a female leader to enhance your management team, you can search their Female Executives database today to identify potential candidates.

Aruna Muralidharan is a product marketer with Zoho Recruit. Apart from helping build insightful marketing and user education content on how Zoho Recruit helps recruiters, she is always on the lookout to learn new strategies and implement it to connect better with potential customers. She is also a trained Carnatic singer.