This is a guest blog by Gal Rimon, the founder and CEO of GamEffective, a next-generation enterprise gamification company focusing on skillful change in organizations.

Many sales advice columns contain one recurring recommendation: a leaderboard. They suggest charting all sales people on a leaderboard and waiting a little for the leaderboard to sink in. They promise that as a result, sales numbers will hit the roof. Is this true? 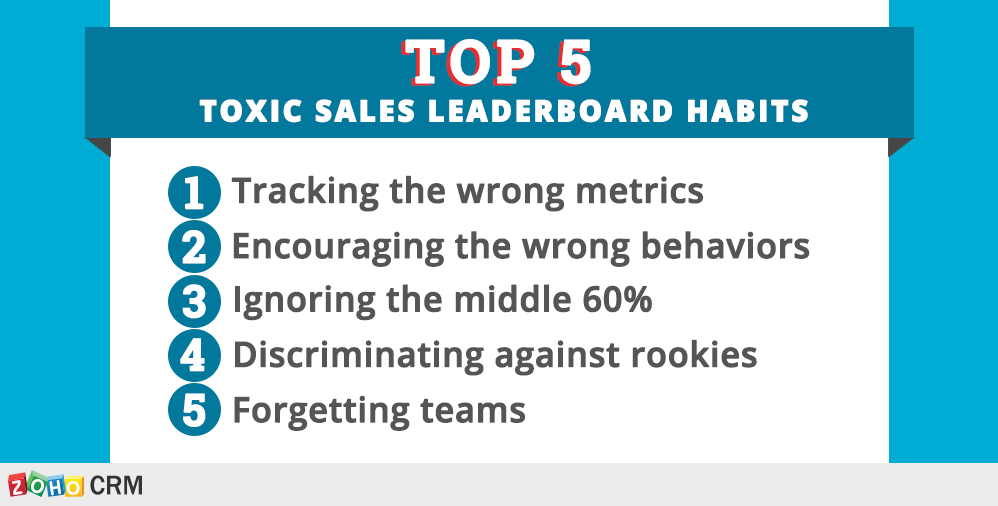 Sales people are a competitive bunch, and a good sales contest can certainly motivate them. However, leaderboards are often misused – in sales situations and otherwise – with potentially nasty outcomes. Here are five toxic sales leaderboard habits:

1. Tracking the wrong metrics
Most leaderboards are fairly simplistic. “Well,” thinks the sales manager, “if I am about to implement a sales leaderboard, shouldn’t the tracked KPIs be what I want to increase by using gamification. Shouldn’t I track sales?”

Using dollar sales or unit sales per salesperson as the main leaderboard metric is wrong; here are the reasons.

●The first reason is that gamification (leaderboards are a gamification element) is about
encouraging certain behaviors, such as qualifying leads, making sales calls, meeting customers etc. The end result of these behaviors is more sales, but tracking actual sales won’t motivate a certain behavior. If the sales team is doing something wrong, they will continue doing it… and the opportunity to guide the right behaviors will be lost.

●The second reason is that this practice is unfair. For instance, the less experienced sales people may get smaller accounts, or work in less lucrative geographies. Judging them by dollar or unit sales isn’t fair. It will also make them regard the leaderboard with frustration or indifference.

2. Encouraging the wrong behaviors
A leaderboard, like any gamification mechanic, is part of a game. The game has rules – and game rules can be “gamed” – i.e. taken the wrong way. People like winning and a sloppy definition rules will result in unintended consequences. For instance, let’s assume the KPI tracked in the leaderboard is percentage of sales forecast met. This means that those sales reps who have met the forecast numbers in their deals (a forecast they made themselves), win. However, what if this creates a strong temptation to cheat by keeping sales forecasts low? What if this causes the sales person to underestimate or otherwise “doctor” sales opportunities?

Other adverse consequences can be a contest to qualify the most leads. If the salesperson is bent on qualifying many leads to win – but this is done just for the leaderboard’s sake or while ignoring other objectives – then the leaderboard was actually damaging.

Conclusion: if you want to improve your sales results you should invest in the middle 60%.

This can evolve into a sense of boredom and disengagement; it can be quickly fixed with better game mechanics that are more suited to the task at hand – gamification isn’t just about points, badges and leaderboards.

Some of this can be solved by leaderboard personalization, and by creating a leaderboard that reflects how people are doing against peers that are similar to them. Make sure that the employee can see their name on the leaderboard and the name of those close to their performance, not just the top performers.

5. Forgetting Teams
When sales teams are supposed to cooperate – sales development managers and account managers – or work across product departments – and leaderboards put too much emphasis on the individual, the adverse result of a leaderboard can be unwanted overly individualistic behavior. This isn’t always the case. In some cases, such as rapid sales scenarios that are fairly transactional, individual competition is the right way. However, sometimes leaderboards work better comparing teams – middle performers can
excel vicariously, through their team members.

Avoiding the fallacy of points, badges and leaderboards.

So, are leaderboards a thing of the past? No. Leaderboards can be very effective in recognizing achievement and encouraging behavior. They are an important gamification mechanic. But they need to be implemented correctly to avoid what Yu Kai Chou, a gamification guru, calls the fallacy of points badges and leaderboards.

Leaderboards can and should be implemented if serious thought is given to the behaviors that should be encouraged, if their end result compares apples to apples (rookies to rookies, small account managers to small account managers) and if they don’t tempt anyone to “game the system”. Their structure should also be considered: instead of having a competition of employees against their peers, people should compete against personal and team goals and benchmarks, not against people; above all they should engage in a game they can win some of the time, especially if they belong to the middle 60%.