How the GST is different from VAT

Like some of us, Ajay’s first encounter with the VAT in India was back in 2005, when he found it on a restaurant bill. For a bill amount of Rs.1000, there was a VAT of Rs.140, or 14%, added to the bill below the amount. At first, he thought it was the name of some extra sauce that he had with his Spaghetti Burmese. But then, unlike the food items he had that day, the VAT was listed below the item table on the bill and not inside it. Curious to know more, he immediately rang up one of his accountant friends, who told him that the VAT was not some sauce, but a new indirect tax system for India. 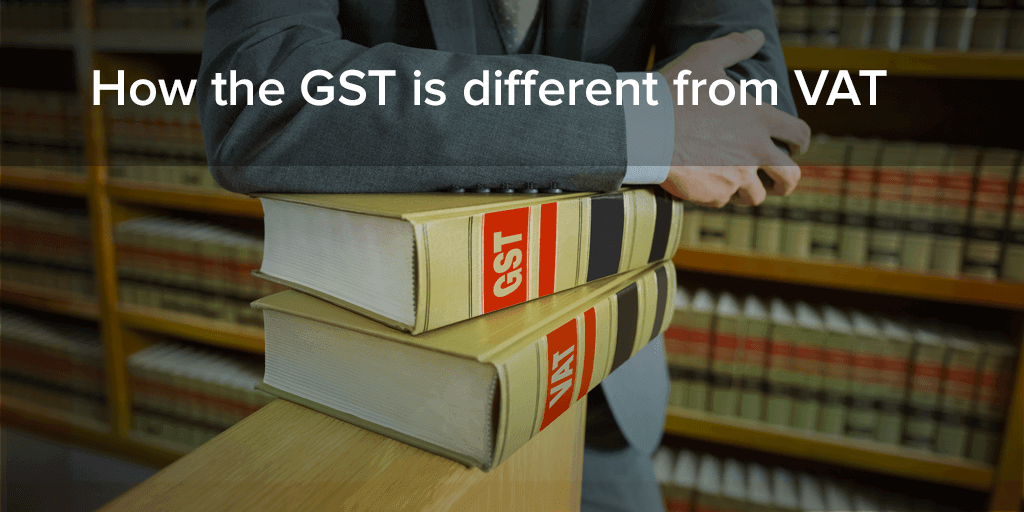 VAT stands for Value Added Tax, and it is levied on the amount by which the value of an article has been increased at every stage of the supply chain.

Before the introduction of VAT, India had a rudimentary sales tax system that caused problems of double taxation of commodities and multiplicity of taxes, which increased the burden of purchase through tax cascading (taxes upon taxes). In an attempt to fix this, the VAT system was brought in by the government.

But today, we are looking at a new system called the Goods and Services Tax, or the GST, that is expected to replace the existing indirect tax system by subsuming 17 different indirect taxes, including VAT. The Goods and Services Tax by definition (according to clause 12A of article 366. Source : November 2016 edition of A Guide to New Model GST Law by S.S.Gupta and V.S.Datey, Taxmann Publications) is any tax on the supply of goods and/or services, except for those on the supply of liquor for human consumption. It operates on the concept of value addition–it is levied upon the value added at every stage of the supply chain.

Wait, doesn’t this sound similar to the VAT system we discussed earlier? Well, you are not entirely wrong. However, there are some important differences to note between the two when we talk about certain key areas: their jurisdiction, their roles in intrastate and interstate transactions, rules and revenue distribution, rate structures, services, and the flow of input tax credits.

For starters, the VAT in India, popularly known as the state VAT, was imposed only upon the goods sold within a particular state. Interstate transactions were not associated with VAT. On the other hand, GST will be imposed upon both goods and services supplied, and it will apply to transactions within a particular state (intrastate) as well as those that happen across state borders (interstate).

For an interstate transaction, i.e., if a seller in one state sells an item to a buyer located in a different state, this transaction will not come under the jurisdiction of the state VAT. Instead, it will accrue a Central Sales Tax (CST will be imposed by the central government) and other Local Body Taxes (LBT) which are imposed by the state that receives the item (the state where the buyer is located).

But, here’s the catch, a trader who sells goods across different states in India must comply with the individual rules and regulations of each of those states. In order to ensure compliance with our complex interstate taxation procedures, trucks carrying cargo are required to stop at all state border check posts, where they will be subject to the scrutiny of local officials. There are two more problems with this arrangement:

As a countermeasure to the above mentioned problems, traders are forced to set up additional layers in the supply chain (more warehouses and outlets) in order to reduce the time spent on check posts as well as to convert an interstate transaction into an intrastate transaction that attracts only the local state VAT.

After July 1st, 2017 (implementation of the GST system), these same interstate transactions will accrue a single Integrated Goods and Services Tax, or IGST. The revenue earned through IGST will be split between the centre and the state that receives the item. One thing to note here is that the GST does clearly not distinguish between supply to another party and supply to oneself; hence, the IGST will apply to any interstate transaction, be it a sale or a transfer of goods. One main advantage of this arrangement is the fact that this will, at the very least, reduce the need of state border check posts and result in faster delivery of goods.

Even though both the GST and VAT rates in India differ based on the types of goods, VAT rates, unlike GST rates are not uniform throughout the country. This is because every state passes its own regulations to govern their own state VAT, while in the case of the GST, the rules are laid down by the central government and thus will more likely be uniform throughout the country.

When we talk about taxes, we also think of revenue earned by the central government and the state. Under the VAT system, all revenue earned through the state VAT goes to the state and the centre relies upon other taxes like the Central Sales Tax (CST), service tax, etc., for revenue. This has resulted in an uneven distribution of revenue, as well as unequal control over its sources. Under the new tax regime, this will change: the council plans to split the GST into two components– a central GST, or CGST, and a state GST, or SGST. This way, both the centre and the state will have equal access to revenue, as well as control to govern this system.

While we are on the topic, let’s take a look at the rates for items under the VAT as well as the GST, starting with precious metals like gold, silver, etc. Under the current system, they enjoy a 1-2% VAT rate; under the GST regime, these metals will be taxed at a 2-4% GST rate. Next, a large number of mass consumption goods such as coffee, prescription drugs, and so on that are currently associated with a 4-5% VAT will continue to be taxed at 5% under the GST. Additionally, under both the VAT and the GST systems, basic goods, such as food and the majority of unprocessed goods that fall under the CPI (Consumer Price Index) umbrella, are nil- or zero-rated.

Any item not falling under any of the above mentioned categories has been associated with a general VAT rate, which can vary from as low as 12.5% to something as high as 20% depending upon item type, origin (home grown or imported), and the state that imposes and collects this tax. Under the GST, irrespective of the state, such items will be associated with a standard rate, which can either be 12% (e.g.: Televisions) or 18% (e.g.: Toiletries). Under the existing tax system, demerit goods and luxury goods accrue the VAT as well as a barrage of additional taxes, such as the Luxury Tax; however, under the upcoming GST system, these same goods will accrue a single 28% tax (Note: Demerit goods will also attract an additional cess on top of the GST).

Another major difference can be found when we talk about services. Unlike GST, the state VAT in India does not include services. The current system associates a dedicated service tax on any service (except for those on the negative list) provided by businesses. This service tax is uniform throughout the country and is governed by the central government.

To get a more realistic grounding on how the differences in these two systems play out, let’s take a look at the way in which both systems handle their input tax credits.

Let’s say you are a trader in Tamil Nadu who buys products from a vendor located in Tamil Nadu and sells products to a customer who is also located in the same state. Under the VAT system, you will be able to get the input tax credit for this transaction. Now let’s suppose you have a warehouse in Maharashtra and you find a suitable supplier in Maharashtra. You buy products by paying Maharashtra state VAT, transfer the products to your outlet in Tamil Nadu, and sell them to a customer in Tamil Nadu who buys them and pays TN VAT. In this case, the tax you paid during your purchase was collected by one state while the tax paid by your customer will be collected by a totally different state, and hence, you cannot claim input tax credit on VAT for such a transaction. However, under the GST regime, you will be able to claim input tax credit in this same situation; because the GST laws are designed to facilitate unrestricted flow of credits between almost all kinds of transactions across state borders, and this places far fewer barriers to your ability to both conduct interstate business and claim input tax credit. To know more about input tax credits, click here.

From the above points, one can gather that the GST is more than a repackaged VAT system, as the way it is structured solves some of the challenges faced by those Indian businesses that are compliant with the VAT system today.

On a global scale, the line between GST and VAT is really thin, to the point that they are conceptually the same and are used synonymously in certain countries. But in India, these two terms represent two systems that completely differ from one another because of the ways in which they are implemented.

Even though the Goods and Services Tax is set to replace the Value Added Tax system in India, the latter was a necessary step in preparing our nation for a simple and yet more data-driven tax system that assures transparency at all levels.