Impact of GST on Day-to-Day Services 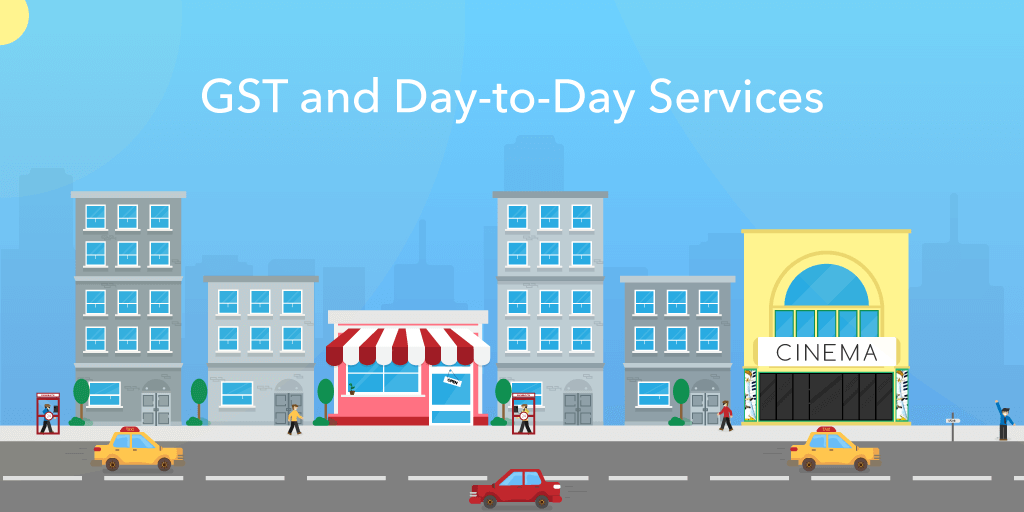 With the implementation of the Goods and Services Tax or the GST, there is so much talk about the new tax system all over India. While it is important to understand what the GST is and how it impacts different industries, we must also look at how it will change our daily lives. In this article, we are going to see how the GST will affect the cost of services that we use on a daily basis.

Before we begin, let’s take a look at the evolution of service tax in India. The taxation of services began in 1994 (as soon as the government realised that services made up about 40% of our GDP), at which time a 5% service tax was levied upon three services: telephone, non-life insurance, and tax brokerage services. Three more services–advertising, courier and radio pager services–soon followed in 1996. In the following year (1997), the service tax base was expanded from six to 15 services (including air travel, renting marriage halls, service provided by recruitment agencies, etc.).

By taking a look at the share of services that contribute to our GDP, one can understand why our government keeps on increasing the tax base and the service tax rate. In the year 2005, services accounted for more than 50% of our GDP–and this share continued to increase over the years. Consequently, this led to an increase in the cost of services that were subject to service tax. At the same time, it gave the necessary boost to government revenue and development schemes that relied on the cess that accompanied the service tax.

The service tax saw another 2% increase in the year 2006, bringing the total ST up to 12%. An additional Secondary and Higher Education cess of 1% on ST was levied, making the total service tax 12.36% until 2010, when it was brought down to 10.3% to make way for the GST (which was initially expected to be implemented in 2010). But this was undone when the base service tax was once again increased by 2% in the year 2012.

With this understanding, let’s take a step into the future and analyse how the GST will change our daily lives in 2017.

The recent years have seen a sharp increase not only in road traffic, but also in smartphone users who have considerably influenced the way we commute and travel. When you combine these two (increased traffic and smartphones), you find taxi service providers like Ola, Uber, etc., offering the services of taxi drivers through mobile apps. When you make use of their services, you will often come across a service tax on the bill. The service tax on cab fare is currently levied at a 15% on the 40% of the fare (i.e. 6% of the total fare). The tax rate for these services under the GST is expected to be levied at 18% (18% of 40% of the fare = 7.2% of the fare), which will increase your total travelling expenses by 1.2%.

Let us consider an example. Nikhil books an Ola mini cab to travel from the Guindy bus stand to the Chennai International Airport (the distance between the two by road is roughly 7.2 km). As of today (November 2016), Ola mini fares are calculated as follows: Rs. 90 for the first 4 km, followed by Rs. 9 for every additional km. We also have a waiting charge of Rs. 1/minute. Hence, the total fare for Nikhil will be somewhere between Rs. 142 - Rs.163, plus tax (assuming there are no surcharges).

Note: For these calculations, we have assumed the base fare to be a constant.

The total cost of hiring a taxi will increase by 1.2%, while the cost of public transport will remain unaffected.

With booming urbanisation, today, we see a tremendous growth in the number of fast food chains and restaurants. On average, working adults have at least one meal a day at these restaurants. Let’s say you go to a restaurant and you order some food and alcohol. As soon as you have had your fill, you receive a bill. When you see a service tax of 14-15% (on 40% of the bill amount, which is roughly equal to 5.6%-6% of the total bill amount), a VAT (Value Added Tax) of 14.5%(in some states like TN) on food, a VAT of 5.5% on alcohol, and a cess or two, you will probably think to yourself, “Oh, I ordered some taxes and I got some food with it!”

Well, not anymore. All this is going to change when a GST of 18% is applied to the bill. You will be rid of a barrage of taxes on your bill, and instead you will see a single tax. (Note: alcohol will not come under the GST and will most likely enjoy the same tax rate (VAT of 5.5%), so cheers!)

Note: Most sources point to an 18% GST on food from restaurants. That being the case, there are some speculations that it could end up at a GST of 12% instead of 18% (even we would wish for that when we are hungry right?). Only time will tell. Irrespective of the result, food will be cheaper in all those states that charge a VAT greater than or equal to 13%, along with a 5.6% ST on 100% of a restaurant bill amount.

You will no longer find numerous taxes on your restaurant bills. The new tax rate of 18% is still less than a combined total tax of 14.5% VAT + 5.6% ST.

Telephone services were one of the very first services to become taxable under our tax laws. With the implementation of the GST in July 2017, phone bills are expected to go up by 3% due to an increase in the tax rate from a 15% ST to an 18% GST. Even though electricity does not come under the ambit of GST, the cost of electricity is expected to go down due to the reduced taxation on coal.

Even though mobile phone handsets will become cheaper (due to the elimination of tax cascading on goods), the cost of using them is going to increase.

Movies, one of the most popular distractions of the common Indian man, will be affected by the GST as well. This industry makes a lot of money (it made a revenue of Rs. 12,640 crores in the year 2014 alone), and naturally, its services are taxable. The tax levied upon this industry is different across different states. On one hand, we have states like Assam, Himachal Pradesh, Jammu & Kashmir, Punjab, and Uttaranchal where the tax on movies is 0%, while on the other, we have states like Bihar and Jharkhand where the tax is as high as 50% and a whooping 110% respectively. (Note: there are some states that exempt tax on movies from their own state with a title in the native official language of that state. For example, in Jharkhand, there is no tax on Jharkhand films.)

However, the GST will also most likely remove any exemptions that are currently enjoyed by movies native to certain states. For example, although Tamil movies are currently taxed at 0% in Tamil Nadu, it’s likely that tax will increase under the GST.

The implementation of GST will demystify the complexity of the taxes associated with the services we use on a daily basis. With all that said it will certainly eliminate, or at the very least control, the lack of uniformity in prices and service tariff rates across the country, making it fair for the earning class of every state.