Impact of GST on Ecommerce Operators and Suppliers

The growth of the ecommerce sector

Ecommerce is a rapidly growing sector in India. The industry that was valued at $12 billion at the end of 2013 is currently valued at $30 billion. This growth shows no sign of stopping. The industry is on its way to reaching a massive market value of $100 billion by 2020. 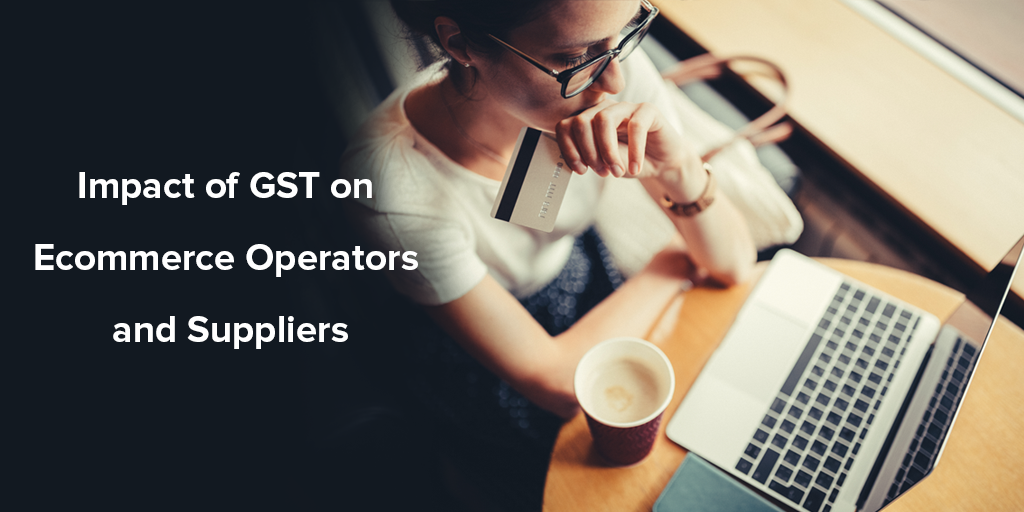 What has led to such an enormous growth of the ecommerce industry?

According to experts, an increase in the number of internet users (which is close to 400 million) led to the shift in the landscape, paving the way for a boom in the ecommerce sector.

Who are ecommerce operators?

Before diving into the particulars, let us take a quick look at who ecommerce operators are.

An ecommerce operator is any online business that operates using a marketplace model. Under the marketplace model, an organization sets up an online portal where several small suppliers put up their products for sale. The organization that runs the portal collects payments, takes a percentage as a convenience fee, and sends the rest of the payment to the suppliers. You might already know some of the big players in this market, like Flipkart, Amazon, and Snapdeal.

With the rise of this new sector, the government has been facing several issues. The current tax laws have made it difficult for the authorities to classify ecommerce companies. Are they selling products? Or are they offering a service?

The answer is both.

To tackle such issues, the new GST regime has a dedicated chapter on how to handle taxes for ecommerce operators.

An ecommerce business needs to register itself with the central government and with the state governments of the states where its suppliers are located. This makes it difficult for existing operators to move into GST, as it involves a complex and time-consuming registration process.

Ecommerce operators are not eligible for the threshold limit that is currently available for other businesses. Irrespective of their annual turnover, registration is mandatory especially if they collect tax at source and they will have to pay GST.

The ecommerce operator will have to file a special type of return called the GSTR-8, which will contain details of the tax they collect on their suppliers’ sales. Apart from this, they will have to file their monthly returns (GSTR-1 and GSTR-2) and the annual return (GSTR-9).

Other Models of Ecommerce

Apart from the marketplace model, there are two other ecommerce business models to consider:

In the inventory model, a business that manufactures goods sets up its own inventory and a website to sell its products to the customers. These businesses don’t collaborate with small suppliers like in the marketplace model.

In the aggregator model, an organization partners with several suppliers to offer a service. A simple example would be cab aggregators like Ola or Uber, who partner with drivers to provide taxi service.

Businesses that operate under the aggregator model won’t be eligible for the threshold exemption, though they will have to register under GST irrespective of the value of supply made by them.

The rise and expansion of several ecommerce operators paved the way for small suppliers and brick-and-mortar stores to earn an extra buck by selling their goods online. But the new GST regime has brought in a few regulations which could significantly impact the sales and working capital of such small suppliers.

Ecommerce suppliers who are selling goods through online marketplaces will not be eligible for the GST threshold limit (20 lakhs). They will have to register for GST and pay tax irrespective of the aggregate turnover they make every year. This will be a major blow for brick-and-mortar stores that make a portion of their sales through ecommerce operators. By selling a few products online, they will lose the tax threshold limit for their whole business.

TDS collected by the ecommerce operator

In a recent press release, the government has mentioned that ecommerce operators should collect a TDS of 2% before paying their suppliers.In the current scenario, marketplaces offer products at a cheaper price with the idea of selling more items at a thin margin. Suppliers pay a small amount out of their profits to the ecommerce operator. A 2% TDS would further trim their margin and push suppliers’ profit to rock bottom.

According to the Model GST Law, ecommerce suppliers can claim credit for the tax deducted by the marketplace operator. The credit can be claimed through the electronic cash ledger of the suppliers’ GST portal.

Every ecommerce operator must file a special type of GST return called the GSTR8. During the filing process, they should show the amount of TDS deducted for each supplier by uploading the respective invoices. This amount should match the data from the monthly GST returns submitted by the ecommerce suppliers. This creates a huge amount of paperwork, making it difficult for both the ecommerce operator and the supplier to comply with the tax department. Failing to comply can lead to a penalty of Rs. 25,000, which is a significant burden for a small supplier.

The ecommerce operators have pointed out that collecting TDS will bring down suppliers’ profit margins and also have a significant impact on their working capital.