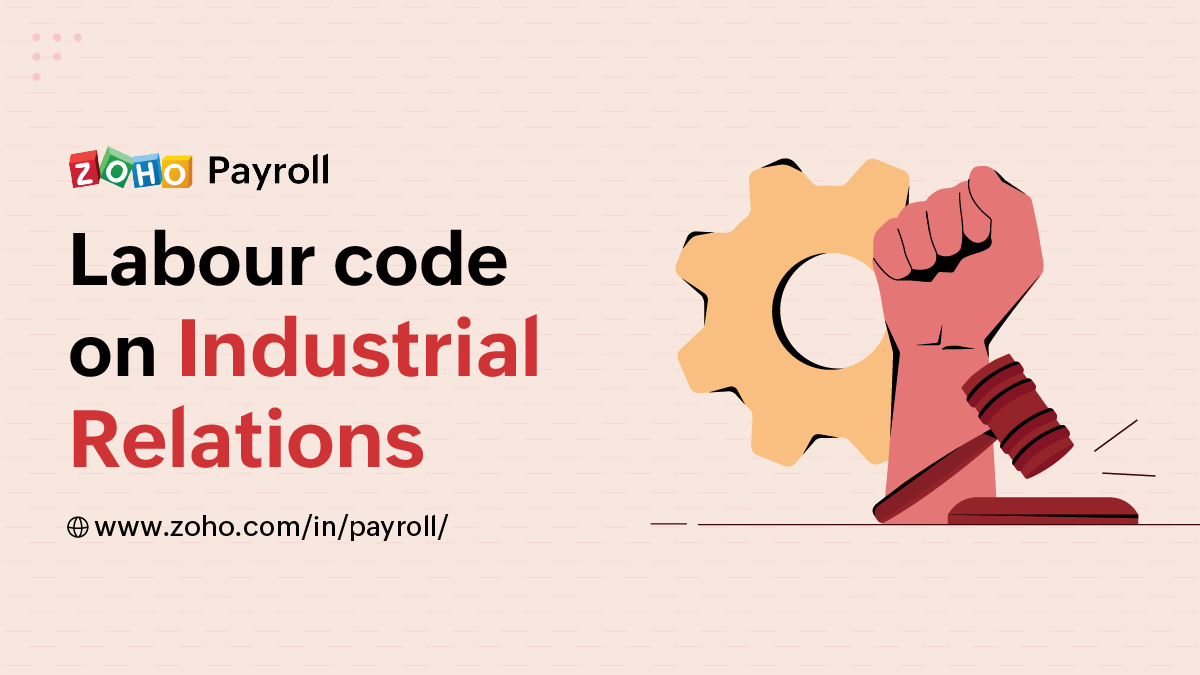 Introduction to the Code on Industrial Relations, 2020

Key definitions under the Code on Industrial Relations

Key provisions of the Code on Industrial Relations

What is changing from the existing bill to the 2020 bill?

Introduction to the Code on Industrial Relations, 2020

As part of the labour reform schemes, the Ministry of Labour and Employment is aiming to simplify the compliance landscape by introducing 4 new codes that consolidate 29 labour laws. Out of the 29 existing laws, the Industrial Relations Code, IRC 2020 is replacing 3 regulations: the Trade Unions Act, 1926; the Industrial Employment (Standing Orders) Act, 1946; and the Industrial Disputes Act, 1947.

The code streamlines the laws related to trade unions, employment conditions for industries, and a comprehensive handling of industrial disputes. There is also a higher emphasis on building a strong employer-employee relationship, creating better working conditions, collective bargaining, and re-skilling employees.

In this article, we will learn about the latest regulations that were proposed as part of the 2020 bill, what is changed from the earlier proposed IRC 2019 bill, and other important highlights of the code that every employer must know.

Key definitions under the Code on Industrial Relations

The definition of workers has been expanded further to include journalists, sales promotion employees, and employees who are working as supervisors but are earning less than Rs. 18,000 per month.

The definition of industries has been amended from the 2019 bill, to exclude the following categories of workplaces:

Organisations that are under the control of the Government specifically dealing with defence research, atomic energy, and space exploration

Organisations specifically excluded by the central government, if any

Any differences of opinion between employees and employers because of employee retrenchment, dismissal, or termination.

The worker can appeal this with the governing body (also called the industrial tribunal) within 45 days from the date of retrenchment or termination.

The working hours, salary or wage, benefits and allowances should be the same for fixed term employees as for the other full-time workers of the organisation.

The fixed term employees will also be eligible for gratuity if the length of the contract extends to a year.

Key provisions of the Code on Industrial Relations

The 2019 bill fixed the employee threshold for issuing standing orders at 100, but the 2020 revised bill increased this threshold from 100 to 300.

For all organisations employing a minimum of 300 employees, standing orders should be passed during the following topics:

How the workers are classified according to employment type (permanent, fixed term, contractors, temporary workers, and apprentices).

The process that the organisation is going to follow to communicate changes to the employees including work period, hours of work, pay days and wage rates, shifts, attendance, and rules for late coming.

Conditions, rules, and approving authorities for leaves and holidays.

Rules for termination of employment, and communication of the news to employees, extending to suspensions of work because of misconduct.

Remedy measures for employees against unfair treatment and exactions by the employer.

Under the 2019 bill, employers had to follow the rules set down by the standing orders even if their employee strength went below 100. To ease the compliance process, the 2020 bill has removed this rule.

Any employer with 20 or more employees has to have one or more grievance handling committees. The IRC has incorporated new regulations that the previous regulation did not address. The panel cannot be more than 10 people, and should have equal and fair representation from employers, employees, and women employees.

The code defines layoffs as the inability of an employer to continue giving employment—due to shortage of resources, materials or power, breakdown of machinery or natural calamities—for employees in their payroll.

The code defines retrenchment as the employer deciding to terminate the services of the employee for any reason excluding disciplinary action. Both layoff rules and retrenchment rules do not apply to organisations with fewer than 50 employees.

The code has also taken a stricter stand on the severance wages for employees laid off or retrenched. If an employee has completed one year of continuous service with the organisation, 50% of basic wages and dearness allowance has to be paid if the employee is laid off. For retrenchment, the employee should be given a one-month notice period, or paid an equivalent pay for the same period along with 15 days of wages for every year of continuous service.

For the benefit of the employers, the regulations around layoffs and retrenchment have been simplified. Earlier, employers with more than 100 employees had to seek permission from the appropriate government to lay off or retrench employees, and now the threshold has been increased to 300 employees.

To support the retrenched employees, the industrial relations code has allocated funds for employees to upskill themselves. Employees can get wages equivalent to 15 days of their last drawn salary. Employers should transfer the funds to the employees within 45 days from employee retrenchment.

What is changing from the existing bill to the 2020 bill?

No definitions were provided for fixed term employment.

Workforce were largely referred to as workmen in The Industrial Dispute Act, 1947.

All forms of employment with a written contract for a specific timeframe are classified as fixed term employment.

The term, 'workmen' is now renamed as 'worker'.

Organisations with more than 100 employees had to seek approval from the government to lay off or retrench their employees.

Establishments with less than 300 employees can lay-off/ retrench/ close without the government's approval.

No concept of worker re-skill funds was introduced.

Employer is liable to pay an amount equivalent of 15 days of last drawn wages to retrenched employees.

Violation of provisions under lay-off, retrenchment, closure of establishment.

For first time defaulters, it is a fine of up to Rs.10 lakhs.

In case of subsequent offences, it will attract a fine up to 20 lakhs or imprisonment up to 6 months or both.

List of acts that are getting replaced under this code